Things to Do in Serbia Part Two

The Journey From Subotica to Belgrade

Traveling from Subotica to Belgrade you are actually passing through Vojvodina, an autonomous province of Serbia, located in the northern part of the Serbia. You can enjoy in the endless plain landscapes with a lot of forests, canals, lakes, big rivers, sandy terrains, numerous hunting grounds, monasteries and other cultural-historical monuments.

Map of Places To Visit

Visit My Blog For More Information About Belgrade

The first written document about Subotica, formerly known as Zabatka, comes from 1391. At the beginning of the next century the city finds itself under the control of Janko Hunyadi and one of his successors, Duke Janos Pongrac of Erdelj, in 1470 built a rather small fortress on the site of a former Franciscan monastery, as a bastion to defend against the Turks. As Subotica sits on the border with Hungary, it had passed many times between Hungarian and Turkish control. In 1542 Subotica fell under Turkish authority and remained under control until 1686. After the Turks left, Serbs and afterwards Hungarians started to settle in. Subotica first gained its status as a licensed country town in 1743, and was upgraded to a free royal town in 1799. In the middle of the 19th Century, the town got its first secular monumental building, a public purpose hotel and theatre. From the end of 19th Century to the beginnings of World War I it developed into a modern town. The most important buildings were built at this time, including synagogue, town hall, Reichel's palace, secondary school and the library.

Synagogue: The synagogue was built in the period from 1901-1902, in place of smaller and more modest one. It was one of the first buildings consisting of concrete and steel constructions.The high central octagonal dome carried by steel columns dominates the building's silhouette. The interior of synagogue is decorated with light colored murals, wood carvings and gypsum elements.

Town Hall: The energetic mayor of Subotica, Karol Biro, decided in 1905 to replace the dilapidated Town hall from 1821 with a new one. The Town hall was formally opened on September 1912 in the presence of the Hungarian elite of that time. The town hall is 76 meters high. The harmony of the art and craft is expressed in the interior decoration, The Subotica Town museum is housed in the Town Hall as well.

Reichel Palace: The house built in Subotica in 1904 for family of architect Reichel was immediately declared the most beautiful house in the city. The architect himself unfortunately did not enjoy his house too long, for in 1908 he went bankrupt, the palace was sold at auction and Reichel left Subotica. The palace was nationalized in 1949, and since 1970 there has been a gallery on the premises.

Palic: Lake Palic is eight kilometers from Subotica. For the first time, the lake is mentioned in 1690. The lake itself is 8 kilometers long, 350 to 950 meters in width, and of an average depth of 2 meters. The area around Palic is of moderate continental climate, with a Pannonia climate with relatively high temperatures, and only a small amount of water. At the beginning of 19th century it was known that the water of Palic had healing properties, and in the middle of the same century already the first spa was built, followed by restaurants, hotels and cottages as well. The park decoration, according to English garden models, started in 1842. Even than Palic, with its nice villas was compared with the famous European resort centers of Karlovy Vary and Wiesbaden. Palic today has many hotels and villas, sport and recreational terrains, three nicely arranged beaches, a zoo, a garden, and is an ideal place for vacation and relaxation. Since 1992 an international film festival taking the city's name has been held.

Zobnatica: Zobnatica is some 30 kilometers from Subotica, on the way to Backa Palanka. This well known tourist and recreational center offer numerous possibilities for hunting and fishing. However, the thing Zobnatica is most famous for is its herd of horses with more than 200 years of tradition. Near the herd is a hippodrome and stables, where visitors can experience riding, the riding school, and hunting coach driving. Within the complex there is also a Museum of horse breeding. Each year, during the second week of September, the horse games of Zobnatica are held. Lodging is possible in the hotel Jadran.

The Orthodox Cathedral of St. Nicholas

The Family Zivanovic Museum of Apiculture

This vivid town surrounded by vineyards sits on the northeast slopes of the Fruska Gora Mountain, along the Danube. A bit more than two centuries ago, Sremski Karlovci was the center of the religious, political and cultural life of Serbian people in Austro-Hungaria. The historical continuity of this region can be traced to Neolithic times. In the Roman era, it was within the Roman province of Donja Pannonia. The first mention in historical sources is from 1308. On September 1521, the army of Sultan Suleiman on the occasion of military operations after the failure of Belgrade, destroyed and burned Karlovci as well as towns in Srem. The medieval fortified town has never been renovated. Karlovci was under the Turks, until 1688. Spreading of political importance and the new role of the town brought about the need to construct public buildings with civic functions. The historical center was developed around the central square. The baroque fountain, the Four Lions, was built in the town center in 1799. The church of Saint Peter and Paul was built in 1719 and in1746 Church of the Presentation of the Virgin in the Temple was renovated at the place of the medieval shrine.

The end of 18th century was a time of economic boom for Karlovci. There were twelve craftsman's guilds in Karlovci. That is the time when black vine from Karlovci and bermet had a good reputation and were exported to Austro-Hungaria, Switzerland and Poland.

Numerous significant monuments of secular architecture were built during the 19th century. The most important and the biggest one is the building of Magistrate 9city hall), built in a neoclassical style. The residence of Patrijarh Rajcic in which the Town Museum resides today originated, in the middle of the century. Very significant is the Patriarchy palace built in 1896. This is one of the most representative buildings in all Vojvodina. Karlovci lost its former importance in 1920 with the moving of the seat of Patriarchy.

Wine growing of Sremski Karlovci: Because of its favorable geographic location, in the direct vicinity of the Danube, reflecting opportunities for a great quantity of light and specific microclimate, the slopes of Fruska Gora have always been favorable for growing grapes. These grapes ripen earlier in the season and have a greater percentage of sugar than most. Roman Emperor Probus, from nearby Sirmium by birth, had brought a vine into these regions in 280 B.C. The vine of this climate had a good reputation from the beginning. Back to the middle of the 15th century, the librarian of Hungarian King Mathias Corvin, Galeotti, had written: " the wine from Karlovci is so pleasant that it would be very hard to find the same one on the whole world". Black wines made of dry grapes from Karlovci are particularly appreciated. Those are after dinner wines, very sweet and aromatic. The permit, the authentic wine of this area, is produced by soaking of more than 20 different aromatic herbs and spices, Wines from Karlovciwere gladly drunk at European palaces.

Besides the wine of patriarchy, in several private wine cellars today in Sremski Karlovci itself, one can taste or buy a black and white bermet, Ausbruch, Merlot, game, Sauvignon, Cabernet, Portuguese, Riesling, etc.

At the time of the grape harvest, by the end of September or the beginning of October, the great grape ball is organized.

The Family Zivanovic Museum of Apiculture: In the shadow of a centennial Chesnut, not far from the immediate center of Sremski Karlovci, one of the sweetest museums in the world exists, the museum of honey and wine. A long apiculture tradition brought about an idea of transforming the family house into the museum in 1968. Through the family history of apiculture, the museum tells the story about the apiculture of this area.

The framework of the museum exhibit presents the collection of books, manuscripts, photos and different types of beehives. The one in the shape of church - a replica of the Ravanica monastery from 1880 attracts attention as well as the objects and tools necessary for apiculture, among which there is one centrifuge for shaking out the honey from 1876. There are periodic expert lectures given in the museum and a demonstration of honey products as well. Besides the honey degustation, in the underground passage of the family house, one can taste Ausbruch and Bermete, the famous wines from Karlovci

The Journey From Subotica to Belgrade 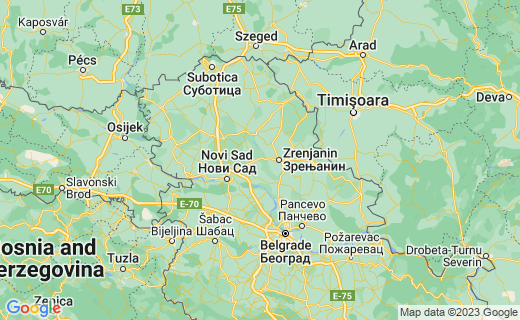 Welcome to Subotica and Palic

How would you rate this article?

Things To Do In Serbia Part One

Things To Do And See In Serbia

Things To Do In Belgrade