Things to Do Across the US: Part 1 - Colorado to Missouri

This past June (2013), my family and I embarked on a road trip from Colorado to Rhode Island. The contract for my job had just expired, so my family and I had to move home. We decided to make a trip out of it. We had originally planned to take I-70 the whole way, but what fun would that be? We hadn't been on a vacation in three years, and figured it was about time. Instead of taking the more traditional route straight across the country, we started in Colorado, went through Kansas, MIssouri, Kentucky, Tennessee, Virginia, Maryland, Pennsylvania, New Jersey, New York, Connecticut, and finally Rhode Island. In part 1, I will cover Kansas and Missouri. I know I start in Colorado, but Colorado certainly deserves its own, dedicated page (check back soon).

Kansas - Things to Do in Kansas

So, Kansas. What is there to say about Kansas? Well, to be honest, not too much. In my experience, most of Kansas looks exactly like the picture on the right. Open farmland with the occasional oil pump or windmill. I had previously taken the reverse of this road trip, going from Rhode Island to Colorado, during which I stayed in Colby, Kansas. I stayed there and I still couldn't tell you where it is. I got there at nighttime and all I could notice was the hotel I stayed at, a gas station, and a pizza place. Due to that exhilarating experience, we decided to blow through Kansas. We just drove straight through all 423 miserable miles of I-70 in Kansas. 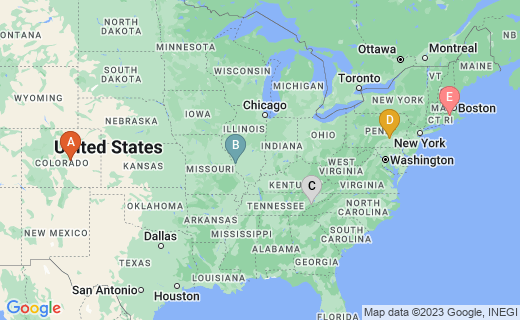 Missouri - Things to Do in Missouri

After barely escaping Kansas (yes, it was that bad), we made our way into Missouri. We knew we wanted to spend some time in Tennessee, so like Kansas, Missouri was more of a stepping stone. We sucked up the 11.5 hours of driving and made it to St. Louis, which is where we stopped the first night.

Especially if you have never been, St. Louis is an interesting city. Unfortunately, we did not budget much time for actual attractions, so it was more of a sight-seeing mission. My first target: The Gateway Arch (See photo on right).

If you do have time, there are a number of great things to do in St. Louis. You can spend a day at the zoo, catch a Cardinals game, or just explore the city like we did. Especially when you are from a smaller city (such as Providence, RI), driving through a major city like St. Louis is quite a journey.

Have you ever taken a long road trip?

Let me take a moment now to touch upon hotel accommodations. In my opinion, it is definitely a good idea to stay at the same hotel chain throughout the entirety of your trip. Most hotel chains have some sort of reward program where you accrue points for staying with them. These points can also eventually earn you a free night, or at least a night with reduced rates.

After doing a fair amount of research, we decided to stay at a La Quinta in all of the places we stopped. We chose La Quinta for several reasons. As mentioned, they have a great rewards program that is free to join. You earn rewards for each stay and can use those points 24 hours later. It takes a few stays to rack up enough points to get a reduced rate or free night, but if you are taking a 5-6 day road trip, it isn't an issue. Second, most, if not all of the rooms feature king size pillow top mattresses. After driving all day, it doesn't get much better than that. Third, there is a La Quinta in most large cities, which was very convenient for us. Last, but certainly not least, is the complimentary breakfast. This was a biggie for us. Finding food on the road can be difficult, especially quality food. It is always good to know I can wake up and grab a hearty breakfast and a good cup of coffee.

Be sure to do your own research. Check to make sure the hotel of your choice is located at your travel destinations. If you are open to suggestions, I will always recommend La Quinta. They have never done me wrong, and we have stayed about 13 nights in 10 different locations with no complaints.

Next - Things to Do Across the US Part 2

Soon to come will be Part 2 of Things to Do Across the US. Part 2 will feature day two of the trip: Missouri to Tennessee. On day two we drove from St. Louis to Gatlinburg, Tennessee. Gatlinburg was the main reason we went so far out of our way on I-70. I had never been, but my wife had been previously. We finally had the time and money, so we decided it was a great opportunity to go (or go back in my wife's case). Because there was so much to do, we spent 2 nights in Gatlinburg to ensure we did everything we had wanted to. If you are going to the Gatlinburg area, or if you want to go, be sure not to miss Part 2.

DISCLAIMER: I did my research, so you should do yours. While I hope my blog helped you, do not take my word for anything, especially those involving prices, weather, etc. I take no responsibility for anything that may go wrong on your trip (although hopefully all will go well).