Things to See and Do in Kennesaw, GA

The surrounding area was also the scene of many dramatic clashes, including a train theft and the deaths of several Union and Confederate generals.

But even though Civil War battles are its claim to fame, Kennesaw offers a great deal more than historical attractions.

The Southern Museum of Civil War and Locomotive History

The Southern Museum of Civil War and Locomotive History in Kennesaw commemorates a daring Union raid commonly known as "The Great Train Chase." In 1862, Union raiders boarded and stole the Confederate locomotive, The General, in an attempt to destroy vital Confederate railroad and telegraph lines. Thus began a wild train chase from Kennesaw to Chattanooga.

The robbed train conductor chased the raiders almost to the Tennessee line, sometimes by train, sometimes by platform car and sometimes even on foot. The raiders tore up the tracks in an attempt to throw off pursuit, but in spite of these attempts, the conductor and other Confederates eventually caught the raiders and recovered the train.

The Smithsonian-affiliated museum now houses the restored General and permanent exhibitions about the train robbery and the importance of railroads during the Civil War. The museum also houses rotating or traveling exhibits of Civil War memorabilia, and houses a permanent Archives and Library featuring archival photographs, drawings, files and blueprints from the post-war railroad industry in the Southeast.

The museum is open daily all year round except for New Year’s, Easter, Thanksgiving, Christmas Eve and Christmas Day. Admission is $7.50 for adults $5.50 for children from the ages of 4 to 12, and free for children under 3 years old.

The Trackside Grill is located across the street from The General museum and is a handy place to stop in for lunch or dinner. The menu features mostly traditional Southern fare such as shrimp and grits, fried chicken and mashed potatoes, and fried green tomatoes.

Lake Acworth and Lake Allatoona are only a few miles north on Highway 41 and offer visitors beaches, picnic areas, marinas, fishing and a wide array of water sports, including boating, skiing, jet skiing and kayaking.

The park is the site of the Battle of Kennesaw Mountain, which took place on June 27, 1864. The battle was a dramatic interruption to General William Tecumseh Sherman's march to Atlanta.

Sherman chose to launch a frontal attack on Confederate General Joe Johnston's fortified positions on the mountain, resulting in heavy Union casualties and a rare defeat for Sherman.

Visitors could devote a whole vacation to this 2,923-acre park; it includes an accessible museum and visitor center, many historic battle sites and monuments, 18 miles of hiking trails and picnic grounds. The park is open 7 days a week and all year long, with the exception of Thanksgiving, Christmas Day, New Year's Day and posted seasonal closings. Admission is free. The park is open only during the day and has no camping facilities.

The Gone With the Wind Museum (also known as Scarlett on the Square) is only a few miles south of the park off the Marietta courthouse square. This small but interesting museum houses movie items like Scarlett's breathtaking black-and-white honeymoon gown and Melanie's flowered bonnet, as well as a GWTW manuscript and movie posters from around the world.

Visitors can choose to stay in one of many antebellum-style mansions in the area. The Stanley House is a historic bed and breakfast inn built in 1897 by President Woodrow Wilson's uncle and aunt. The house is decorated with Victorian-style furnishings and is located a few blocks from the Gone With the Wind Museum in Marietta.

The Whitlock Inn is a gloriously restored turn-of-the-century Southern mansion available for dinners, meetings, events and weddings. It's located a block from the Gone With the Wind museum in Marietta.

Ernest Barrett Parkway is Kennesaw's main shopping and dining corridor. Many of the area's non-historical attractions are located on or near Barrett Parkway. Barrett Parkway runs right in front of Town Center Mall -- home to nearly 200 stores -- and is lined by dozens of freestanding restaurants, including:

The Town Center Mall area is also home to the Regal Town Center 16 theater, for visitors who'd like to take in a movie. Any visitors who visit Town Center should also take the opportunity to visit the nearby Varsity restaurant, home of the legendary Varsity hot dog and the artery-clogging, but oh-so-good, Varsity fried onion rings.

Battlefield visitors who leave their cars on the south side of the park can drive west on Dallas Highway for a few miles to reach The Avenue at West Cobb. This upscale mall contains over 50 stores and a variety of restaurants, including:

McCollum Airport is Kennesaw's air traffic gateway, located not far from Town Center Mall. Visitors who arrive by plane can grab a quick bite in the airport's restaurant, Elevation Chophouse, before heading out to local attractions. Charter companies at the airport also offer visitors open-cockpit biplane rides, and helicopter rides over Kennesaw Mountain and the surrounding areas.

Kennesaw paintball companies such as Georgia Paintball (supply vendors) and Arkenstone Paintball (paintball fields) give visitors the chance to play commando games in a variety of themed fields. 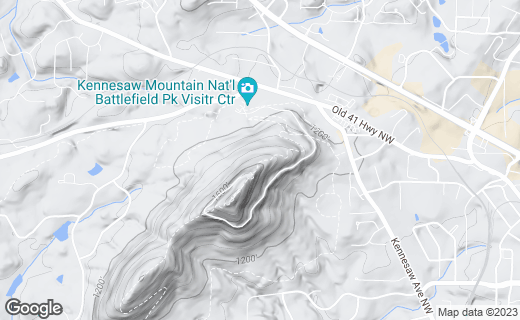 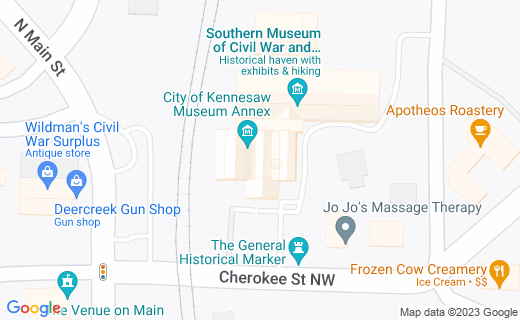