Top 5 Cities That Are Job Strong After The Great Recession

North Dakota and Its Enchanted Highway

The Great Recession strangled the American years during 2008 – 2010 and constricted the rest of the world. After 2010, the effects were still evident, painfully so. Some Americans never went back to work full-time again.

Many US residents lost their houses and retirement pensions – even their families. Many accepted 2 to 3 part-time jobs to work simultaneously instead of finding full-time work at one company, but they were thankful to have those smaller jobs.

While all this was befalling our nation, some areas of the USA were not so badly affected during the recession, including Texas and to a lesser extent, Ohio and some others. At this writing several years post-recession, analysts from major finance magazines are recognizing 10 cities where the progress of economic rehabilitation and growth are most highly visible.

What cities are so blessed?

Many American cities land on Top 10 lists every year, but some communities on the following list of “survivors and thrivers” cited by the Pew Charitable Trusts in June 2015 seem to be on most of them. The two cities in Texas are particularly inoculated against economic declines by the lack of state income tax that brings in new businesses and by a historic grasp of aviation and aerospace R&D, manufacturing, and services since before the founding of NASA and going back to WWII.

Two Californian cities are noted for Healthcare employment and training, IT developments, and other up to date industries, and even in a recession, these two were able to pull out of decline quickly.

The fifth city on this particular Top 5 List of strong job creators is an arts, music, and cultural oasis. it is that very arts and music development that is lifting it out of recession.

North Dakota is the hero of the list. It is the state with cities recovering most strongly from the recent recession, because of the giant oil boom still occurring there in 2015-2016. Hundreds of oil wells are yet to be built, having already been approved by the federal government, especially in the New Town area of the local Native American Reservation on which unexpected and massive oil deposits were discovered. The Williston Basin to the west in North Dakota also contains major oil deposits – enough, some say, to power all of North America for a century, once refined. That takes this continent's oil supply into 2150 BCE (AD).

According to Pew analysts, the state increased employment by 28% from their recession era low points to March 31, 2015.

Californians are pleased that a few of their cities are recovering strongly from the Great Recession. Texas adds a few as well, and the Yellow Rose State’s contributions are the cities usually found on Top 10 lists of “bests” – Austin and Houston.

California’s top recovery cities just as often appear around the Top 10 Lists of American magazines and blogs when compared with Texan cities. However, the two visibly strongest cities at present in terms of job growth are San Jose, California and Austin, Texas, both with 22% increases. That figure is an addition of over 1/5 of each city’s baseline.

If any young man is about to commence the world, we say to him, publicly and privately, 'Go to the West.'

Creating Jobs in the West and South

The next two job-strong communities are in the same states. These are San Francisco and Houston, with 18 to 19% growth in jobs for each.

Number Five in job growth is the incredibly expanding Nashville, Tennessee metro, with nearly 19% job growth since the recession. The TV series Nashville has undoubtedly aided growth by luring more visitors to the city. Nashville outdistanced the statewide increase in jobs by 10%!

Further, the fine arts and performing arts community in Nashville works nearly 24/7 to enhance the city and its residents’ lives. Not only are these professionals bringing additional fine arts to the metro area, but also, they are participating in a large number of volunteer service and other programs that are raising the standard of living for all. 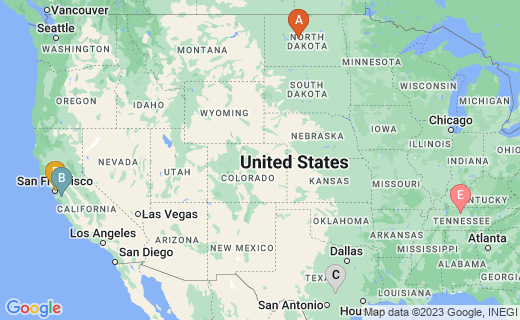 The five metro areas that have produced the largest numbers of new jobs since 2010 are:

In addition to the three states mentioned in the above list, Utah and Colorado are among the Top Five States overall to grow jobs since 2009.

Look at the major job creating metropolitan areas below and see what they have to offer to you and your family or friends - even senior citizens. You may want to relocate.