Assam or Asom is indisputably one of the most enchanting regions of India where you can view historic remnants, religious sites, quaint hills, green valley, majestic mountains, rich flora and fauna and other astounding gifts of nature - rarely available in such abundance elsewhere. The unique diversity of wild lives, the only one of its kind in entire Asia, draws a lot of tourists to the state of Assam in India throughout the year. Assam is neighbored by the states of Mizoram, Tripura, West Bengal, Manipur, Nagaland, Arunachal Pradesh, Meghalaya, and Bhutan. 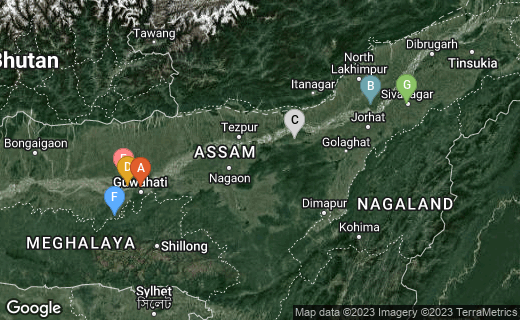 Situated on the banks of the alluring river Brahmaputra, Guwahati, the capital of Assam, is the largest city in the State and the gateway to the northeastern states. The foremost tourist attractions of Guwahati are its ancient temples - the Kamakhya Temple situated atop the Nilachal Hill is revered as the most sacred among the tantrik shrines of Shakti worship. The temple is a testimony to the rich and distinctive Assamese style of architecture. The gorgeous Brahmaputra and the Guwahati city can be seen from a bird's view by walking a few steps up the Nilacha Hill.

The Navagraha temple in East Guwahati is, as the name suggests, the "temple of the nine planets," and was an ancient seat of astrology and astronomy. Housed in a red beehive-shaped dome, the central lingam is encircled by nine smaller lingams representing the planets. Apart from the temples, the Guwahati Zoo should be on the itinerary if you are a wild life enthusiast because it is the largest natural zoo of the entire country. The Guwahati planetarium, located on MG Road will provide a fascinating and unforgettable experience.

Situated in the midst of the ever-flowing river Brahmaputra, Majuli is largest fresh water island in the world and over 15 Vaishnava monasteries are located in Majuli. The time-honored Assamese arts are preserved and kept alive through these monasteries or satras as they are also known. This River Island is an adorable for its scenic beauty and is a natural habitat for the rare breeds of flora and fauna and the place also serves as a migratory path for ducks, geese and other birds.

Not visiting Kaziranga National Park will be inexcusable as you will miss out on some exotic wild life not present elsewhere. Kaziranga National Park is home to the near-extinct one-horned rhinoceros. Due to some imaginative conservation measures, the population of one-horned rhinoceros in Kaziranga has risen to a whopping 1,700. Other exotic wildlife attractions at this park include hordes of Indian elephants, Indian bison, swamp deer, sloth bears, tigers, leopards, hog badgers, wild boar, jackal, wild buffalo, pythons, and monitor lizards.

Avid bird watchers can have the unusual experience of viewing diverse bird species including the oriental honey buzzard, black Kite, fishing eagle, Himalayan griffon and large numbers of migratory birds during winter months such as Greylag geese, Ruddy Shelduck, Red-Crested Pochard and the Northern Shoveller. Kaziranga National Park is the oldest park in Assam, not spoilt by human interference, and covers an area of 430 Sq kms along the river Brahmaputra.

Sualkuchi enjoys a pride of place as one of the world's largest weaving villages often referred to as the Manchester of the East. A renowned center of silk production and the special inimitable golden silk of Assam are not produced anywhere else in the world. A sojourn in Sualkuchi will be a rare experience and most visitors to this place develop an emotional attachment. The picturesque Sualkuchi forest range on one side, well-tended agricultural fields and the village fishing pond with rich fauna on other - combine to present a serene rustic picture. Local residents are extremely hospitable and entertain visitors with learning programs in traditional weaving, organizing treks, cruises and holding cultural performances.

Hajo, located 32 kms from Guwahati on the north bank of the Brahmaputra, is a symbol of secularism where three religions converge - Hinduism, Islam and Buddhism. Thus, Hajo is an important pilgrimage center for Hindus, Muslims and Buddhists. Hajo is also renowned for its metal bell work. The Hayagriba Madhava Temple at Hajo is a sacred abode for both Hindus and Buddhists. Powa-Mecca is a celebrated Muslim shrine at Hajo. According to the inscription on the wall of this mosque, it was built in 1657 and the foundation reportedly consists of some holy earth brought from Mecca.

Other tourist attractions of Assam

Sibsagar is widely acknowledged as the seat of Assamese culture from time immemorial. Sibsagar also features Shivadol which is the tallest Shiva temple with two smaller shrines on either side of it for the Lord Vishnu and the Goddess Durga. The scenic beauty of vast and lush green tea gardens is an optic feast. Chandubi Lake is a natural lagoon and a picturesque picnic spot. The lake and its surroundings is an ideal holiday resort particularly for those fond of fishing and rowing. Moving 180 km from Guwahati there is Tezpur, one of the most sought-after tourist destinations of Assam. There you can visit Pabitora, a small wildlife sanctuary and observe at close quarters Rhino and various species of deer.

Assam - where the surging Brahmaputra incessantly flows, tea gardens sparkle, the nature comes alive with salubrious national parks and exotic sanctuaries - is a captivating land that keeps beckoning tourists. A visit to Assam is a lifetime experience and the like of it you may never obtain elsewhere.