Diu is quite an isolated and yet bewitchingly beautiful place away from the bustling din of urban areas. The relics of the Portuguese occupation can be still found in Diu and serve as romantic reminders of the area’s glorious past. The the Union Territary of Daman and Diu in India, it was a part of the Goa, Daman and Diu till 1987. 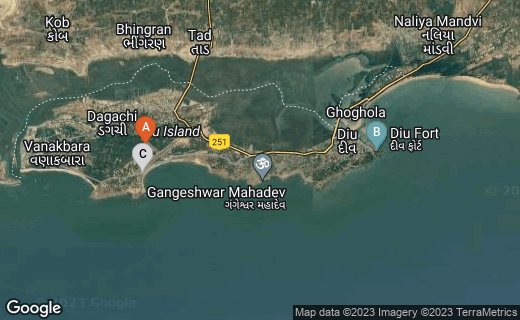 An introduction to Diu

Diu Fort, surrounded by sea on three sides,isone of the important Portuguese forts in India that was built after the Mughal Emperor, with the aid and support of the Portuguese people, attacked the Sultan of Gujarat. Though most of the walls, archways and interior of the fort are now in a dilapidated state, it still speaks a lot about the strength of the then Portuguese defense. The imposing Diu Fort enjoys a pride of place and dominates the townscape and offers a magnificent view of the sea.

A brief Tour of Diu

Nagoa Beach is an aesthetically designed shoe shaped beach that presents a unique serene view of the Arabian Sea. Located far away from the rush of the urban areas, tourists come here to enjoy seclusion and calm.  The semi-circular Nagoa Beach is also an ideal place for various water sports.

Forte De Mar, more familiarly known as the fortress of Panikot, is located near the beach and served in the colonial past as a naval base for controlling the north eastern parts of Arabian Sea. Students of archeology will find the place interesting. Moving further you will find the ancient St. Thomas's Church, which has been transformed into the Diu Museum.

Other chief attractions of Daman and Diu

An important tourist attraction of Daman & Diu is Gangeshwar Temple, dedicated to Lord Shiva, houses five lingas in the midst of the rocks on the seashore.  Some of the most enchanting beaches of Daman & Diu are Ahmedpur, Mandvi, Chakratirath, Jallandhar, and Gomtimata – each one having their own charm and thrill.

The Zampa Gateway among the various tourist attractions in Daman & Diu is of particular interest and it features intricate carvings of lions, angels and a priest and also houses a chapel that has inscription dating back 1702. The tourists will also catch the sight of the artificial Zampa waterfall which presents a fascinating sight.

There are also several temples and mosques such as the Gangeshwar Temple and the Jama masjid. The Nagoa beach, Gomptimata, Chakratirth and many other prominent beaches provide astounding points to view the glorious sunsetset dusk.

Daman & Diu, the second smallest union territory in India is situated on the west coast of India. These twin islands feature massive forts, white sandy secluded beaches, magnificent cathedrals, many scenic locations and several impressive monuments. The place exudes the subtle old world charm of its Portuguese colonial era. Because of its favorable climate and pleasant ambience, many scenic locations and historic relics, Daman & Diu can prove to be a romantic weekend gateway for nature lovers, holiday makers and adventure enthusiasts.