Set in the foothills of Aravalli, the small and yet enchanting State of Haryana sprawls over a physical area of over 44,000 square kilometers in North India. Haryana is hailed as a tourist’ delight because its salubrious climate and array of tourist attractions like the rugged hills, chill tanks, dense forests, century-old monuments, soul-stirring temples, lush green gardens, romantic lakes, picturesque landscapes and more. Haryana shares its borders with Rajasthan, Uttar Pradesh, Punjab, and Himachal Pradesh.

The tourism department of the state is focusing on the development of various sites which are of natural, historical as well as of religious importance. The state has set up many tourist complexes and camp sites to promote tourism. Haryana Tourism has developed 44 tourist complexes spread all over the state. You can drop into any of these and spend an exciting day enjoying boating, picnic hides and children's parks, visiting restaurants, ice-cream parlors, and bars – these complexes are ideal family-getaway.

Must see tourist places in Haryana 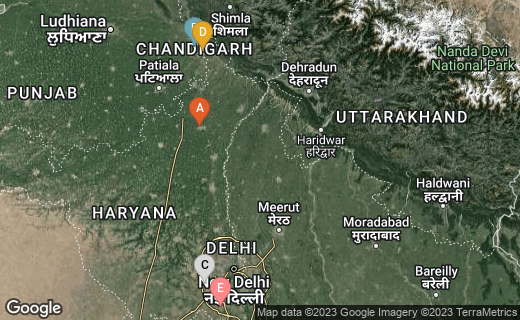 Kurukshetra is often called the Land of Holy Legends as it is here that, as per Hindu mythology, the epic battle of Mahabharata took place. Kurukshetra is dotted with numerous sacred shrines and is a revered place for Hindu pilgrimage. The important religious sites here are the Brahma Sarovar, Sannihit Sarovar, Gurudwara Sadbhiti, Thaneswar Tirtha, and Rajghat.

The Sri Krishna Museum in Kurukshetra features remarkable ancient stone carvings and prominent among them are the deities of Krishna and Lord Vishnu. Works by hundreds of Indian artists including ancient and modern pieces are displayed here. Miss not, to see the rare exhibits that include miniature paintings, palm leaf etchings and illustrated manuscripts. The most popular gallery of the Sri Krishna Museum is number four, which contains nine life-size scenes or dioramas of Krishna in various poses. Bewitching costumes and jewelry are additional highlights of the dioramas.

Chandigarh, the capital of Haryana, is famous as it is the first city to initiate the concept of town planning in India. Imaginatively designed by Le Corbusier, Chandigarh is strategically segregated into 61 sectors. The pollution free clean air, the wide tree-lined boulevards and avenues, all roads laid in parallel, the cool breeze from the Sukhna Lake and the neat layout – all combine to make Chandigarh a haven for fun-loving tourists and holidaymakers.

To add to your excitement, drive to the outskirts of the city and reach a newly opened mall (Fun Republic) or to the picturesque Morni hills on Panchkula Road that houses a bird sanctuary and you can relax amidst lush forests and in the company of colorful chirping birds. Panchkula, situated 8kms away from Chandigarh, Panchkula is home to the temple of Goddess Shakti, was built by the Maharaja of Patiala to commemorate his victory in a battle in 1861.

Sultanpur National Park and Bird Sanctuary is an excellent destination for avid bird watchers. Large numbers of migratory birds visit the place from October to March; they are especially attracted to the fish and insects that thrive during floods. Sultanpur bird sanctuary was upgraded to a National Park in 1991. There are four watch-towers located at different points in the park to facilitate better bird watching by tourists. There are more than 450 species of birds in the State of Haryana and of these about 250 have been recorded in the Sultanpur Bird Sanctuary. Some of the popular and more ubiquitous birds include the purple sunbird, gray and black francolin, egrets, weaver birds, doves and mynahs. Flamingoes, cranes and wagtails are some of the common migratory birds.

Panchkula district has the Morni Hills - the only hill station of Haryana - a salubrious and calm place. During the monsoon season , a carpet of lush green grass covers the hillside which makes it look like a green carpet rolled out and it forms a grazing ground that attracts the black buck and Neelgai. Tigers and panthers can also be spotted, while foxes, mongooses, jackals and wild dogs are to be found aplenty.

Other Main Tourist attractions in Haryana

Badhkal Lake, situated 32kms away from Delhi, with its manicured gardens presents a serene ambience where holidaymakers can spend quality time. Dumdama Lake is must-visit lake with the Aravalli hills forming a picturesque backdrop to the placid lake, and there are facilities here for canoeing, kayaking and angling. Surajkund is a lake, built by a Rajput king Surajpal Tomar to honor the rising sun. The ruins of a Sun Temple lie around the lake. At Yadavindra Gardens, 22 kilometers from Chandigarh, lies a historic building belonging to the 17th century. It is set in a Mughal garden, with a waterway surrounded by green lawns. A later addition to this beautiful spot is the romantic Japanese garden.

Haryana is noted for adventure tourism. Adventure Sports like Rock Climbing, Trekking, River Rafting, and Parasailing are regular events held in different places in the state. The enthralling ride in the air under Parasailing and Para Gliding are for the brave-hearted. Canoeing or kayaking in the river Yamuna from Panota Sahib to Hathnikund is a terrifying adventure.

Haryana , the land of great culture and heritage is fast developing as an attractive travel destination . Haryana is widely known as the greenest state in India and considered as a land of rich culture, proud heritage, hoary traditions and enviable history. Haryana tourist attractions include an array of historical and religious sites, romantic parks and gardens, placid lakes and green valleys.