From coastal hikes to treks in the Sierra Nevadas, California offers up some of the best trails in the country. Whether you’re looking to capture a mantle-worthy photo or build up those quads, here are 7 treks that shouldn’t be missed (though, honestly, it’s hard to narrow it down):

This backcountry trail takes you along 24 miles of rugged coast, from Mattole to Black Sands Beach. The route offers up the best of California — from dramatic coastal cliffs to stretches of wilderness, from seals and sea lions to redwoods in the Sinkyone Wilderness preserve. This is where you go if you want to leave the crowds, traffic and bustle of everyday life behind. 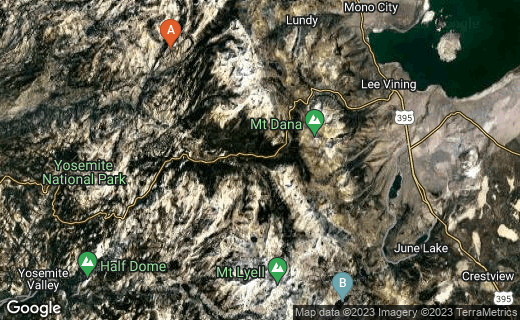 This isn’t an easy hike, but you’ll feel like you’ve been dropped right into an Ansel Adams photograph. A three- or four-day trek along the Pacific Crest Trail to Thousand Island Lake in the Sierra Nevadas offers challenging alpine trekking along with panoramic mountain vistas. There are several options for day hikes around Banner Peak, where you’ll come across lakes, ponds and glaciers. And for the more adventurous, there’s an option to climb Mount Ritter and Banner Peak. The trailhead at Devil’s Postpile is open from June until early December, depending on the snowfall, and you may need a wilderness permit (obtained from Inyo National Forest).

This 8.5-mile trek earns its name with views of Yosemite’s famous landmarks — all in one day. Start at Glacier Point and wind your way down to the Mist Trail, where you’ll get views of the Half Dome, Illilouette Falls, Liberty Cap, Nevada Falls and Mount Starr King. At the Panorama Point, you’ll see, as the name implies, panoramic views of the Yosemite Valley, all the way to the Royal Arches.

If you’re looking for a longer trek in Yosemite, the Ten Lakes Trail takes two to three days, with an elevation gain of about 2,400 feet. The route takes you through scenic woods and meadows, past granite cliffs and into a canyon, before spilling you out into the middle of three alpine lakes. Be prepared for strenuous switchbacks and the possibility of creeks flowing across the trail.

An hour’s drive north of San Francisco, Point Reyes National Seashore offers 150 miles of hiking trails along the coast and through the forest, with options for day hikes or multi-day backpacking trips. Point Reyes juts out several miles into the Pacific, making it a great spot for whale watching in April and November. The views along the coastal trails are considered some of the best in California.

This 30-mile hike takes you from the Santa Cruz Mountains through the South Bay Woods to Waddell Beach on the Pacific Ocean through two of the Bay Area’s state parks, Castle Rock and Big Basin Redwoods. The trail gives you a taste of everything California: mountain vistas stretching to the sea and ancient redwood forests. Side trips include Berry Creek Falls and the Redwood Loop. Start at Castle Rock State Park off Highway 35; the trek will take about three days.

While California is known for its coastal walks, a hike through its ancient redwood forests — with the tallest trees in the world — is a must. It’s also ideal for hikers — cool in the summer, rarely below freezing in winter, without the crowds. Head to Jedediah Smith State Park and hike the Boy Scout Tree Trail. Or head to Prairie Creek Redwoods State Park and trek the Miners’ Ridge and James Irvine loop.