Rick is an architect, designer, technophile, and Mac enthusiast.

High-Profile Landmark of the Cambridge Campus

Considered by many to be not merely America's finest institution of higher learning, but in fact the greatest and most prestigious university in the world, Harvard is a natural draw for aspiring students, parents, educators and tourists from around the globe. Let this architect guide you around its famous campus.

Harvard is centered in Cambridge, Massachusetts, abutting the Charles River just eight miles from central Boston. Harvard Square, the site of the original 1630s village of Cambridge, is now a hub of traffic and commerce surrounded by both the sprawling Harvard University campus and the thriving city of Cambridge (population: 100,000). Though Harvard's undergraduate population is a modest 6,100, its graduate degree population is more than double that, at about 12,500. Those seeking graduate degrees range across such prestigious schools as Harvard Law, Harvard Divinity, Harvard Medical School, Harvard Business School, the Graduate School of Design, the Graduate School of Education and the John F. Kennedy School of Government. All told, the student populations of Harvard and its Cambridge sister university, MIT, account for 3 of every 10 Cambridge residents.

We begin this tour at the historic core of Harvard Yard. Pictured above is Memorial Church, a classic Colonial edifice of 1932 that overlooks that portion of Harvard Yard known as Tercentenary Theatre. Memorial Church is a memorial to Harvard's war dead from a number of the nation's wars, and Tercentenary ('third Century') Theater was so named in 1936, upon the 300th anniversary of Harvard's founding. The Theater has since served as the site of each graduating class' commencement ceremony. Here we see the striking visual character of Harvard Yard — that iconic image of a landscaped Ivy League quadrangle under towering trees, ringed by red-brick buildings and criss-crossed by perpetual student traffic. The Yard is actually a network of almost a dozen smaller quadrangles that interconnect to form the 25-acre central hub of this famous campus. The portion known as Old Harvard Yard is, fittingly, the oldest portion of the Yard, and contains both the longest-standing academic building in America (Massachusetts Hall, built 1718-1720), and a great many of the university's 17 freshman dormitories. Virtually all freshman (numbering roughly 1600 in the August 2009 entering freshman class) are housed about Harvard Yard. They therefore experience many of their first semesters' days on campus via the scene depicted below:

Across the Charles River

The Statue of Three Lies

Within the Yard are both Harvard Hall and the statue of John Harvard. Actually, that statue is known among Harvard cognoscenti as 'The Statue of Three Lies': 1) despite the name etched into its pedestal, the statue does not really depict John Harvard, as he left neither portraits nor detailed descriptions; instead a likely-looking student was chosen by the artist to sit for the sculpture; 2) though so inscribed, John Harvard was not the school's founder, merely its first major benefactor — he left the bulk of his estate including property in Southwark, England to the 'College at New Towne', as the university was previously known; and 3) the year of the school's actual founding, 1636, is mistakenly carved as 1638. The statue is also purported to provide luck to admission aspirants (as well as their families) and admitted students alike; hence the boot-tips polished to a high bronze sheen by the ever-present, ever-pressing hands of the hopeful.

Even George Gets the Commencement Spirit!

Opposite Memorial Church across Tercentenary Theatre (and in fact extending well beneath Tercentenary Theatre with multiple subterranean levels) is the Widener Library, anchor to the largest university library system in the world, and containing more than 3 million volumes of its own, including one of the few rare intact Gutenberg Bibles. The Widener Library also contains, as its primary central display, the completely reconstructed personal library of namesake Harry Elkins Widener, a bibliophilic teen who died in the Titanic disaster.

Fairly typical of the early-Colonial-era red-brick buildings of the Yard is Holden Chapel, a modest structure erected in 1744 (seen quite clearly in Paul Revere's famous 1757 engraving of the Harvard campus). Holden Chapel did in fact serve for a time as a chapel, though its other uses have included that of an autopsy theater for Harvard Medical in the 1780s, and its current use as a recital hall for various campus choral groups. 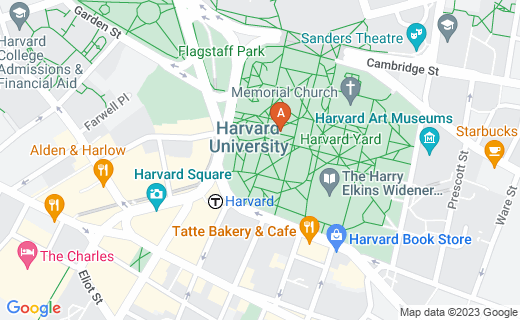 Harvard Yard, the 25-acre core of student life, is the oldest section of America's oldest university.

Live on Campus All Four Years

Most of the other freshman dormitory buildings and office/classroom buildings ringing the yard conform to a similar type and style: clearly classic Colonial, three to four stories in height, all of red brick, with pitched slated roofs and projecting chimneys, regularly spaced with white-framed multi-pane double-hung windows. All of the buildings are also generally narrow enough in plan to allow daylight to penetrate both front and rear of dormitory suites, arranged in stacked pairs about an entryway and stairwell. Harvard is unusual among major universities in that it commits to four full years of on-campus housing for its undergraduates. Freshman are housed within the Yard's many brick structures, such as Lionel House. The several dozen students who access their dorm rooms daily via each entryway develop, over the course of their first two semesters, an 'entryway identity' — a kinship and bond that carries through academics, intramurals and university life beyond. Beginning in sophomore year, they then move on to the 'House' system, wherein groupings of perhaps 400 or more students reside their remaining three years within one of a dozen distinct houses, many of which overlook the bends of the Charles River.