After finding the International Banana Museum closed when we first arrived at the north end of the Salton Sea we returned to state highway 111 and continued south along the eastern shore of the Salton Sea.

My son-in-law still wanted to see the Banana Museum and we agreed to stop again on the way home even though my wife, daughter and I didn’t care if we stopped or not.

As we started heading south back on Highway 111 the road was close to the Salton Sea and we had glimpses of its waters shimmering in the late morning sun as we drove. However, it wasn’t too long before the road curved to the left, away from the sea.

A Newspaper Article Years Ago Introduced Me to the Salton Sea

I had first heard about the Salton Sea from an article that appeared in the Wall Street Journal in the late 1970s or 1980s about the large number of retirees who migrated in their RVs (Recreational Vehicles) from the northern part of the country every year to the Salton Sea where they spent the winter.

Since we were visiting the area in late November, which is the start annual influx of winter residents from the north begins arriving in the southern part of the nation, I assumed we would soon pass a an area where the RVs were congregating.

Salton Sea is the Most Recent Occupant of the Salton Basin

While the Salton Sea has been around for a little over a century having been formed when heavy rainfall in 1905 and 1906 caused the Colorado River to flood and destroy some irrigation dams designed to regulate the waterflow, it is but the most recent lake to occupy the Salton Basin.

Like other parts of California, the Colorado Desert is crisscrossed by the San Andreas and a number of other earthquake fault lines, Since prehistoric times earthquakes in the area have often changed the course of the Colorado River in the area.

All of these factors, sometimes acting together and sometimes separately, resulted in the lake changing as it expanded and contracted over time.

My Family Viewing the Salton Sea From Bombay Beach

Beginning around 700 A.D. water began collecting in the Salton Basin to form what has commonly been referred to as Lake Cahuilla, a name that seems to have been applied to similar lakes that preceded that filling of the basin. This last Lake Cahuilla covered the same area as the present day Salton Sea as well as a much larger portion of the surrounding area. Unlike the Salton Sea it did empty into the Gulf of California which allowed it to remain a freshwater lake.

Cahuilla is the name of the native peoples who lived in the area when the Spanish, and later Americans, arrived in the area and many of their descendants continue to reside in reservations in the area.

Later, earthquakes caused the Colorado River to shift course away from Lake Cahuilla and this, plus evaporation, led to the lake shrinking which is the same fate the Salton Sea is experiencing today. Lake Cahuilla ultimately dried up completely just as the Spanish began arriving in the New World. By the time Spanish missionaries and explorers advanced westward to California and the Pacific Ocean all that existed of Lake Cahuilla were stories from the native Indian tribes about a lake that once existed in the Colorado Desert.

We Discover the Town Of Bombay Beach

As the road curved to the left away from the Salton Sea, we came upon a sign saying Welcome to Bombay Beach. Other signs indicated that it was a state recreation area and campground which appeared to be mostly empty.

A little further on, and literally next door to the recreation area was a small city also called Bombay Beach. We made a right turn into the city (the entire city is located between the highway and the lake).

While the Bombay Beach hosts a declining population between two and three hundred it has all the appearances of a rapidly decaying city on the verge of becoming a ghost town.

My wife was not at all impressed by the decaying town and instructed our son-in-law to continue driving straight toward the sea which was a short distance away.

A Home and Yard in Bombay Beach

Bombay Beach started as a private development in late 1929 and quickly began attracting weekend visitors from Los Angeles and other southern California cities as well as tourists and retirees.

The beach turned out to be in no better shape than the city. The Salton Sea is changing and changes to the sea in the past four decades are the cause of the sad state of both the beach and the city.

Today the Salton Sea is shrinking due to evaporation and decrease in water diverted from the Colorado River, the opposite occurred in 1976 and 1977 when heavy rains from tropical storms caused the sea’s level to rise and flood the lowest section of the town (the city as a whole is about 233 feet below sea level making it the lowest community in the United States) sinking a mobile home park and damaging or destroying some 500 city lots.

As the Salton Sea Shrinks Its Beaches Get Ever Larger

Today the beach has expanded considerably as the water level in the sea has dropped. Piers that once extended out from the shore now sit on dry land as do a few abandoned boats.

Despite the dilapidated condition of the beach it hadn’t lost all of its charm or photogenic attraction. All four of us spent a leisurely and enjoyable hour or more exploring and taking pictures along the vast beach area which, thanks to the shrinking of the Salton Sea has led to a massive expansion of the beach.

It was then time to find a restaurant for lunch and to continue our trip.

One of Bombay Beach's Many Unique Homes

Our Trip as We Traveled along East Shore of Salton Sea 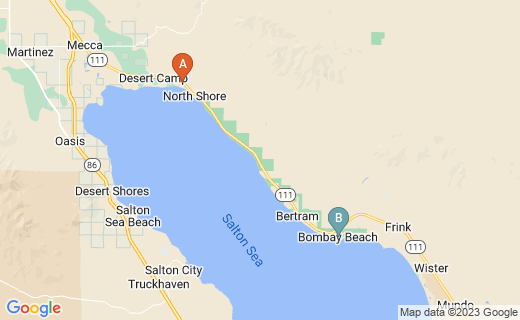 Small Community located along the east shore of the Salton Sea