Guyana is a small South American country located at the northern portion of the continent between Venezuala on the West and Suriname on the East.  Officially named Co-operative Republic of Guyana and formerly known as British Guiana, the country is culturally diverse and offers visitors a multitude of cultural and natural wonders to explore.

NATIVE AMERICANS TO THE DUTCH

Guyana was first inhabited by the Arawak and Carib tribes which are thought to have originated deep within South America and migrated North, first into Guyana and then to the Caribbean islands.  The first Europeans to settle in the area of Guyana were the Dutch who did so in 1616 on the Essequibo River.  Other settlements soon followed along other large rivers and in 1621 the Netherlands gave the Dutch West India Company complete control of the Essequibo settlement.  The colonies of Berbice and Demerara were established and over time the Dutch colonies in Guyana were producing a significant number of crops.

With the increased importance of agriculture, a labor shortage emerged and the Dutch West India Company began to import slaves to work the plantations.  Working conditions were brutal at this time.  There were several slave uprisings, the most famous at Berbice in February 1763.

In 1746 the area close to the Demerara River was opened to the British and by 1760 the majority of the population was British, not Dutch.  From 1770s to the 1795, war and a continuous change of control between the Dutch, the British, and the French plagued Guyana.  In 1795, Britain officially took contol of the area and would occupy Guyana until 1966.

Guyana became independent from Britain in May 1966 and officially became a republic in February 1970.  In 1966, Venezuala rejected the 1899 boundary with Guyana and attempted to revive its claim on Guyana west of the Essequibo River.  In 1969, more challenges to the new government arose in the Rupununi Rebellion and challenges would continue through the 1970s as Guyana’s government became increasingly socialist.

Guyana’s culture is more like those of the Caribbean islands and less like those of its South American neighbors.  It is one of only four non-Hispanic countries in South America.  Guyana is a founding member of Caricom and is the home of Caricom’s headquarters.   The country has a blend of East Indian and African cultures which makes its culture similar to Trinidad and other West Indies islands.  These countries share similar food, festivals, music, and sports.   Guyana is also a part of the West Indies cricket team and a member of CONCACAF.

Notable landmarks include St. George’s Anglican Cathedral, Demerara Harbour Bridge, Stabroek Market and The City Hall.  St. George’s is one of the tallest wooden churches in the world and is the second tallest wooden house of worship in the world.  The Demerara Bridge is the world’s fourth-longest floating  bridge.  Stabroek Market is a large cast-iron structure and appears to have had a statue located next to the Demerara River, and The City Hall is another beautiful wooden structure from the colonial age. 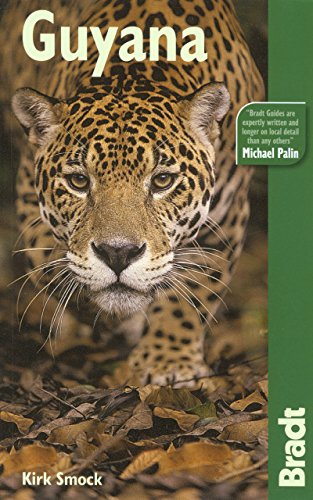 Guyana stretches 450 miles from the coast into dense rainforests almost inaccessible by man.   The country is graced by mountains that are said to be the inspiration for Sir Arthur Conan Doyle’s novel The Lost World.   These mountainous regions include steep escarpments and waterfalls.  Guyana’s mountains give way to rivers and savannahs closer to the coast and finally a fertile, marshy plain at the coast where the majority of the country’s population lives.

Guyana has 16 different habitats and 14 distinct areas of biological interest.  Generally the country is divided into five natural regions – the fertile coastal plain, a hilly sand and clay region, the rain forests, the grassy savannah and the interior highlands.  Nearly 80% of Guyana is still covered in dense rainforest.  Half of Guyana’s plant life is found nowhere else in the world.  Due to a sparse population in the rain forests, these ecosystems have remained relatively pristine.

In an incredible effort at conservation, in 2004 the Guyana government issued title to more than 1 million acres of land to the Konashen Indigenous District as the Konashen Community-Owned Conservation Area, making this the largest community-owned conservation area in the world.

Guyana has one of the highest biodiversities in the world.  With over 1,100 vertebrate species, 8,000 plant species, and 1,600 bird species, the rich natural history of this small country is stunning.  The Essequibo watershed is home to a large diversity of fish and aquatic invertebrates, giant river otters, capybaras and caimans.  Land mammals include the jaguar, tapir, bush dogs, anteaters and saki monkey.  Additionally, the pristine rain forests are home to thousands of species of insects, spiders and other invertebrates, and undoubtedly home to many plant and wildlife species that have yet to be discovered.

Due to this incredible biodiversity and rich natural environment, Guyana is putting together a nomination of cluster sites for World Heritage Site recognition.  The cluster site includes Kaieteur National Park (and Kaieteur Falls, the world’s tallest single drop waterfall), the Iwokrama Forest and the Kanuku Mountains.

Guyana’s cuisine is a hybrid of African, East Indian, Portuguese and Chinese influences.   Meat dishes are often seasoned with curry and side dishes can vary from roti and rice to pumpkin, meta gee (dumplings), plantains and beans.  A popular local drink is mauby, made from the bark of a tree and said to enhance potency.  Ginger beer is also popular as is sorrel.  Favorite dishes include pepperpot and chow mein.  Another popular dish is a one-pot meal with any favorite meats or vegetables.

Guyana’s climate is tropical, generally hot and humid though tradewinds from the Northeast tend to moderate the temperature and humidity.  The country has two rainy seasons.  The first extends from mid-May through August with the second occurring from mid-November through January.

TENSION AND FREEDOM IN POLITICS

Despite being a multi-party democratic republic, the country has been ruled by the PNC, People’s National Congress, with the same president, Forbes Burnham, from 1970 until his death in 1985.  His successor, Vice President Desmond Hoyte, continued to rule the country in a mostly socialist government until 1992.  The first truly free and fair elections occurred in 1992, bringing into power Cheddi Jagan of the PPP-Civic who was followed in power at his death by his wife, Janet Jagan, and Samuel Hinds.  Despite tension and violence-filled elections, they continue to be held and the PPP has retained power in the last two elections.

The Guyana Story: From Earliest Times to Independence
Buy Now