Travel - Key West, Florida: The Little Island That Seceded From These United States

Beyond The Tourist Mecca

A travel haven and mecca for artists, particularly writers, Key West has served for generations as a call away from the industrialized world - a sojourner's oasis from the urban confines of man. In this part of the South, a tourist in Key West will find the usual trappings of museums, tour buses, chartered vessels, charming saloons, and street vendors yet remain unaware of the local plight.

At the Pirate Soul Museum, travelers learn about how the islands used to be a haven to pirates, not tourists, and recent treasures discovered in the waters off the islands. A variety of eateries will supply Cuban foods and the real Key Lime Pie (named for the Key Lime that only grows in the Keys).

These are enjoyable pursuits but there is also a hidden Key West. For the traveler seeking the soul of Key West, hidden less-touristic destinations are described below.

A Curious Story About A Local Point of Interest

After a drive across the Overseas Highway (Highway 1), the traveler finds the Key West Lighthouse. The lighthouse ended up in the middle of town, which is an odd location, so many tourists are interested in knowing just how the lighthouse ended up encased by land on all sides. The answer is that the coastline is very different from the time before the lighthouse was built. Originally, the lighthouse was located on the edge of the island - at the edge of the sea. However, the Navy completed dredging work and filled in shallow areas of the island with the excavated dirt. This created a new coastline and a larger landmass for Key West. This is why the lighthouse is now located in the heart of the tourist district and not on the coast. The Key West Lighthouse now serves as a museum (including the caretaker's home) and an available source of Key West history to the public.

Yes, she awaits you on the locals' beaches, such as Higgs Beach - with a nearby dog park. Many swim at Higgs Beach, despite jellyfish warnings in some portions of that beach. Or try the beach next door, Smathers Beach.

The local metal detector set seek their catch off Smather's Beach - another spot to swim. On my last visit there, one local metal detector expert had just found a $3000 watch. The classy hotel, The Waldorf Astoria, peaks discreetly from the corner of these locals' backyard, instead of from the enclave of the downtown nightlife. Since it's adjacent to these beaches, you'll see some of those tourists mixing it up with the locals but without the usual insanity found along the touristic Duval Street.

There's also an off-the-beaten path of a restaurant that is worth the time to go to: The Hogfish Bar and Grill. A shout out to time of old, before the town was overrun with tourists, visitors find plenty of locals enjoying their workday meal and a fish only found in the Southern Florida waters - the hogfish. It actually looks like a hog and that's why I had to have some. Mmm-mmm! Talk about good eatin' there... if you can find it.

Key West TODAY: The Very Best 153 Things You Must Do
Buy Now 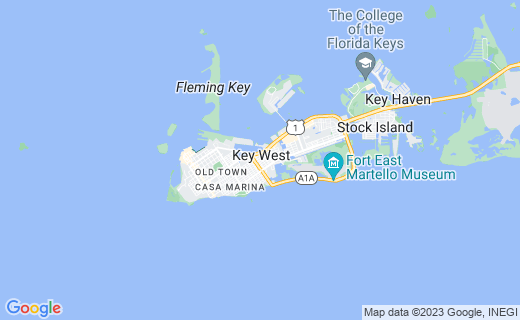 A lesser known page of history is that The Keys (all of them) suceeded from the Union in 1982.

The original protest event was motivated by a U.S. Border Patrol roadblock and checkpoint which greatly inconvenienced residents and was detrimental to tourism in the area. This tiny island felt harassed by the US Government and responded by declaring war on the USA. Since Border Patrol agents were searching without warrants for drugs when the premise of their arrival had been on the grounds of filtering out illegal immigrants, locals were upset. Naturally, illegal immigrants don't fit in glove compartments, so the invasive searches became an outrage to island residents who were bitter over reduced tourism, the main source of the economy on Key West.

Not more than one minute after declaring war,

the Conch Republic surrendered as part of a well-devised plan. Then, they asked for one billion in foreign aid and war relief to rebuild. Today, the Florida Keys are proud to refer to themselves as the Conch Republic - the name assumed by the collection of hardy folks who demonstrate their pride in this historical moment by wearing jewelry and pins with the symbol of the quasi-government. Many still proudly fly the flag of the Conch Republic. While most everyone considers this secession as a tongue-and-cheek one, many countries actually respect and honor the passport of the Conch Republic and you, too, can be the proud dual citizen and passport holder of the Conch Republic - for the small price of $100! (But we don't recommend you travel without that good ol' American USA passport!)

Free Tour of The Keys From Experts

There's a secret of sight-seeing in Key West that is hiding on the island - disguised as an unassuming military or government building - but has a wealth of exploration and entertainment waiting inside her doors and this particular location deserves a special note to the traveler who wants to learn about the aquatic life and understand the coral reefs, to realize how and why all the Keys are surrounded by protected waters while simultaneously under threat of commercial vessels. With expert docents available and entertaining hands-on choices for children, this is a family-friendly location that comes at a fantastic price: free! That unique attraction would be the Florida Keys Eco-Discovery Center.

Two other budget-friendly places to explore are Bahia Honda State Park - where habitat only found in the Keys exists and the cheapest camping on Key West can be found - and Fort Zachary Taylor State Park, where snorkeling amid the coral reefs is the highlight in the crystal clear waters and park rangers offer tours detailing Civil War history. The later is located near the Eco-Discovery Center. The free snorkeling pools of Fort Taylor or by way of Bahia Honda State Park are an affordable alternative to the more expensive commercial offerings. Sure, it's possible to pay $120 per person for the privilege of riding a boat to pass by some dolphins on the way to snorkeling. The other option is to pay $8 per vehicle (up to eight passengers included) to enter Fort Taylor and snorkel the coral reef without the hype.

While You Might Be Tempted To Move Here, Think Again

The island is beautiful, the views majestic, the people easy-going and straight forward, the entertainment ongoing, and the weather sublime. Why not consider it a home away from home, or better yet, buy a home here? Think again. While a vacation might be possible, living here is not affordable for most people. The middle class live as paupers here. Captains sleep on their boats for lack of homes. Some live on the edges of less visited beaches. The very people that bring you the fun in the sun are nearly destitute. Low income housing? It's almost impossible to attain. A serious threat to the way of life in the Keys now: corporations infiltrating and buying up the remaining land left in order to promote expensive resorts and accommodations. It will be a sad day if we return one day to find that Key West no longer holds the charm of old and has become a commercialized shadow of its former self. Let's hope that day never comes.

What Is There To Do In The Keys?

Did you know that most of the cats living at the Hemingway House have six toes because they are descendents from Hemingway's cat?