Vistas that never disappoint, villages and hamlets that reflect the history of the Dales...

Lofthouse-in-Nidderdale eludes many travellers who frequent the Dales, opting for better known Wensleydale and Swaledale. To many the roads up the dale from Pateley Bridge at the southern end of Upper Nidderdale and west from Masham via Fearby and Healey are largely unknown.. And yet it's equally accessible - albeit steep in places - from both directions.

Let's take the latter route, starting from Masham with its thriving market, two breweries and smaller market square cafes (did you put your coins in the honesty box when you parked?) We'll pass through Fearby first. Watch the road signs. Outsiders can get disoriented and they're not that large. The road is fairly easy on to Healey and then climbs up past the first of two reservoirs, Leighton. The smaller Roundhill Reservoir is passed next and you're still gradually climbing but it's not too bad even though there's a tricky twist past Leighton Reservoir. You come to the watershed between the two dales, Wensleydale with its largely wide vistas and Upper Nidderdale that seems to have been scooped out. The Ice Age glaciers bulldozed through this region (as it did further east through the North York Moors) in a bid to smooth out the landscape, sheering off smoother and softer rock formations, leaving the harder limestone prone to centuries of wear. You can see the nature of the environment in the building stone used over the last millennium.

Compiled by a local socio-historical and environmental group, the Upper Nidderdale Landscape Partnership researches into the historical aspects of the dale as well as its natural and environmental history. You can't help but admire the professionalism of the book's presentation when you leaf through its pages. 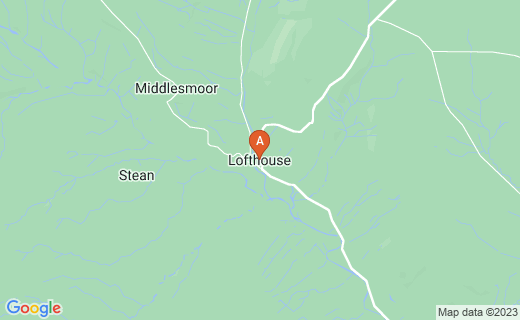 From Masham and Bedale in the Wensleydale direction, Lofthouse is ideally situated in Upper Nidderdale for exploring the Dales

Back a few miles towards Masham in Wensleydale

Scenically the approach from the north is better both for photographers and sight-seers. near Lofthouse, over the winding descent to Pateley Bridge you can see Little Whernside to the north (605 m) and Great Whernside (709 m) to the west above the hills beyond Middlesmoor and Stean below where the Nidd emerges from below Great Haw (544 m).

On towards Pateley Bridge are the hamlets of Ramsgill by the road, and Bouthwaite a short way further to the east above Gouthwaite Reservoir (all three reservoirs were created in the inter-war years to provide water for the West Riding mill town conurbations. Several farms and hamlets were evacuated when their dales were flooded.

Above the southern end of Gouthwaite lies the village of Wath, nestling in woodland to the east of the road. The narrow-gauge Nidd Valley Light Railway served the local communities and contractors' workers on the dams being constructed to hold the reservoirs, with stations at Lofthouse, Ramsgill and Wath on the way down to Pateley Bridge Station and the parallel connection with the regional network.

Down Dale towards Pateley Bridge

It is thanks to this activity to update the water supply that the roads along Nidderdale were also impoved, both to serve the contractors and the communities. Thus an influx of tourists would result, although as I've mentioned not to the same extent as Swaledale and Wensleydale to the north.

The market town of Pateley Bridge lies near the point where local roads intersect the B6265 that runs from Ripon in the east, and Harrogate to the south-east with its connecting B6165 from Ripley, between Ripon and Harrogate on the A61, to Grassington in Upper Wharfedale to the west.

Pateley Bridge, known locally as just 'Pateley' is a small market town with a population of just over 2,200 according to the census taken 2011. It lies within the Borough of Harrogate and belongs historically within the West Riding along with Harrogate and Ripon. Boundary changes in 1974 played havoc with the county and over recent years some changes have occurred that partially redressed the political machinations of Westminster. The West Riding was reduced to about 60% of its original size, bringing howls of protest from across the county.

With the oldest sweet retail outlet in the country - founded 1827 in a building that dated back to the 17th Century - Pateley also houses the Nidderdale Museum, that provides an interesting perspective of the dale's past. Also in the town, on the way out to Ramsgill, is the Foster Beck Water Mill, An inn now, with a large water wheel mounted on one end of the old building, it provides a point of interest for drinkers and alfresco diners on their way out of or into town. Close by, across the road is a large camping and mobile home park nestled amongst trees.

Yorkshire prides itself on its local and main county shows - the Great Yorkshire Show - that begin in late summer and end with the Pateley Bridge Show (a few days after the Stokesley Show this year) on 23rd-24th September.

Let's dig into the town's history...

Pateley came under the auspices of the Diocese of the Archbishop of York, becoming 'Bishopside'. The main community of Bishopside in the 12th Century was nearby Wilsill, about two miles south-east of Pateleym recorded first as 'Patleiagate'. 14th Century versions show it - amongst others - as 'Patheleybrig[ge]'. The latter half of the name in the 12th Century derives from Old Norse and Northumbrian Aengle (Anglian) 'gata', meaning 'street'. The latter part, 'brig[ge]' stems from Old Norse 'brygge', perpetuated in local dialect meaning 'bridge'. The 'Pateley' part is thought to stem from Old English for a clearing oropen land, i.e. 'woodland clearing of [crossed] paths'. The 'paths' are now minor roads that cross just south of the town, the B 6165 and B 6265 that I've already pointed out. The 'Pateley' part of the name has raised debate amongst ethnologists. Another explanation dates back to 1227. The name 'Padtlewath' crops up, and the later 'Patheslayewath' from Middle English 'padil', and Old Norse 'wath' being one and the same, a shallow ford, reflecting the Danish presence of the 9th-11th Centuries. In 1320 the Archbishop of York awarded a charter for a regular market and annual fair.

Scotgate Ash Quarry operated above the north side of town from the 14th to the 20th Century, closing in 1915. Its hard-wearing form of sandstone was sent nationwide by train and applied as edge coping to station platforms, official buildings and seaport walls.

Foster Beck Water Mill, formerly a hemp mill. This Grade II listed building features a 34 ft diameter wheel at one end of the main structure. It has been an inn owned by Scottish & Newcastle Breweries, a night club and is now a private residence. The mill building has twelve bays of vertical oblong windows of sixteen panes each on the first floor, twenty panes each on the ground floor. Three end bays were added. Lintels are stone hammer-finished monolith stone, and both front and rear features are identical. Blocked windows on the wheel end wall suggest the wheel was originally smaller. It was worked as a hemp spinning mill by 1864 under the ownership of one Joseph Shann. The business was declared bankrupt in 1909 and bought by other operators, closed finally in 1966. The wheel you see on the building now, with its header tank were installed in 1904..

The narrow gauge Nidd Valley Light Railway used the terminus station of Pateley Bridge from 1907 to 1937, the standard gauge line closing in 1951. The line branched off the Leeds Northern line at nearby Nidd Bridge station, services emanating from Leeds Central Station terminated at Newcastle-on-Tyne. Connections could be made for trains to Harrogate, Northallerton, Eaglescliffe and Stockton-on-Tees. Currently the town's only public transport link with Harrogate is an hourly bus service up the dale.

Where is Upper Nidderdale and how do I get there?

If you drive from other parts of Britain or England in particular, the main road network centres on the M1, M62, A1(M), A65 and A66. Drive from Harrogate northward on the A61 to the Ripley roundabout, west along the B6265 Grassington road to Pateley Bridge, north to Lofthouse; from Northallerton west to Bedale and Masham beginning with the A684 to Bedale, the B 6268 to Masham and west via Fearby, the Leighton and Roundhill Reservoirs and over the watershed to Lofthouse.