Granada, Nicaragua and a neighboring town known as Masaya, are two of my favorite places to visit when I go to when I am in this country. Granada is one of the oldest colonial cities in Central America, so when going there, you get to see some great examples of Spanish colonial architecture. There is also an interesting geologic history of the area, as illustrated by the extinct Mombacho Volcano and the Granada Islands. And, you can conveniently fit in an hour tour of these islands while your are visiting Granada.

There are different ways of seeing the sights in the town - by foot, taxi or horse carriage. If it is not raining, the horse carriage tour is worth doing. Most of the sights are within a 10 to 15-block area that surrounds the central square, where you can hire a horse carriage or get a taxi. You can also take a taxi to the docks where the boat tours of the Granada Islands begin.

Within the central park, you will find various vendors selling crafts and foods. The number of vendors varies with the time of the year, but it can become quite crowded. Bordering the park is the central Catholic Church, which dominates the landscape of Granada with its golden walls and rust-red domes. There are several other Catholic churches nearby. The Iglesia de la Merced, which was initially built in 1534, is a great place to go. There, you can climb the narrow stairs up to where the bell is to get a bird's eye view of the city. It costs a dollar to climb the stairs, but the view is well worth the investment. The photos below show some of the sights you may see.

Views of Granada, Nicaragua from the Iglesia de la Merced

Things to Do in Granada Nicaragua

The Granada Islands. Besides taking photos of the unique architecture, you can go on a trip to see the aforementioned Granada Islands, which were created by a long-ago explosion of Volcano Mombacho. These islands are scattered all along the shore of Lake Nicaragua, just to the south of town, beginning at the southern tip of the municipal park. The excursion boats are comfortable and take quite a few passengers at a time. The photo shows a monkey that boarded one of the boats at Monkey Island, a refuge for monkeys established by a local veterinarian. This island is at the end of the tour. Don't get too close, they might want to board your boat looking for a handout!

Eating. There are many good restaurants in Granada. I highly recommend trying out the Zaguan, which is one block to the east of the central Catholic Church. It was there that I recently tried out a whole fried Guapote, a fish which is native to Lake Nicaragua. It was deboned and cooked to perfection, and it was enough for two people. This toothed fish has firm flesh that reminds me of red snapper. It is also called a rainbow bass. This restaurant also serves fine grilled steaks.

There are many places where you can go and have good meals. I have dropped in on various hotels to try out their breakfast offerings. The style of the meals in some cases are more European than Nicaraguan, as the tourist clientele is more sophisticated. There are some decent baked goods available in some locations.

Shopping. There are the usual shops for buying knick knacks, some of which are associated with hotels. You can also go to the area near the market, which is located two blocks to the south of the central square. However, if you are really interested in getting good bargains and a also having a good selection of items, it is best to go to one of two markets in Masaya. There you will find a tourist-oriented market near downtown, and the Old Market, which is a few blocks to the east. Both are within walking distance of each other. Masaya also has horse-drawn carriages to get you around. 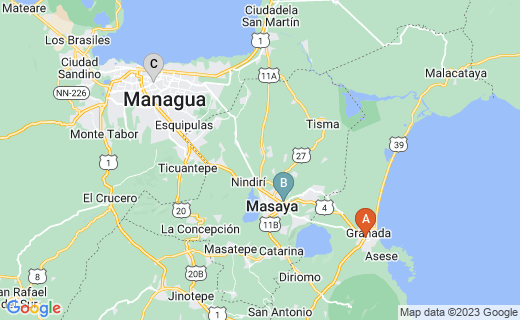