Fort Sumter is the place where the civil war began on April 12, 1861. It was the day when a Union fort came under fire from Confederate artillery. It was a moment that was celebrated by many civilians from Charleston, South Carolina. They watched and cheered during the bombardment of the Union garrison at Fort Sumter. During the battle, the fort had it's supply lines severed by Confederate forces. The next day, the Union garrison surrendered to the Confederates. The United States civil war had started.

In 1776, American Patriots decided to construct a fort to protect Charleston, South Carolina. Prior to it being completed, Fort Moultrie was attacked by the British in 1776. It was constructed by soft palmetto logs that were able to withstand the British bombardment. They were able to absorb the force of the cannonballs shot at them. It was reported at the time; the British cannonballs would bounce off of the walls constructed from palmetto logs. The fort's commander was a man named William Moultrie. He was in charge of the 2nd South Carolina Regiment. This military unit had approximately 400 men. They fought a battle with the British that lasted the entire day. When the engagement was finished, British ships had sustained heavy damage. They were successfully driven away from the Charleston area. The fort was then named after its commander, William Moultrie. There is a local celebration in Charleston to commemorate the victory over the British. They call it “Carolina Day.

This fort was named after a Revolutionary War hero named General Thomas Sumter. The construction of the fort occurred after the War of 1812. It was designed to provide protection for the southern portion of the United States coast and its harbors. The building of Fort Sumter started in 1829. When the Civil War started in 1861, it was still not finished being built. There were thousands of tons of granite delivered for the fort's construction from New England. The granite was used to build a sand bar at the entrance to the Harbor of Charleston. Fort Sumter was designed as a structure with five sides. It was approximately 190 feet in length. Each of the walls at the fort were five feet thick. Fort Sumter could accommodate over 649 men and more than 134 guns. It had a three tier gun emplacements design. Fort Sumter was never used to its full capacity.

After the Confederates captured Fort Sumter in 1861, plans to retake it were made by the union. The first attempt occurred on April 7, 1863. During this battle, Union Admiral Samuel Francis Du Pont deployed monitors from the Union blockade to take Charleston Harbor. Monitors were a class of low freeboard, ironclad ships that used steam power to travel. The first one of this class of ship was the USS Monitor built in 1861. The Union's attack did not succeed. The Union ship USS Keokuk sustained extensive damage and sank the following day. After the battle, Confederate soldiers salvaged the cannons from the sunken USS Keokuk. These cannons were then placed inside Fort Sumter and used against Union forces. This was a time when Confederate engineers and others spent time and resources to fortify the fort's defenses.

The last officer from the Confederate forces to command Fort Sumter was Major Thomas A. Huguenin. He was a graduate of the Citadel and Military College of South Carolina. He did not formally surrender Fort Sumter. Union General William Sherman's movement through South Carolina forced all Confederate forces to evacuate Charleston. This included abandoning Fort Sumter. The Union forces officially took control of Fort Sumter on February 22, 1865. During the ceremony for raising the flag, a Union soldier was killed, and another was severely wounded.

By the time the Civil War had concluded, Fort Sumter was in a state of ruin. The U.S. Army started an effort to restore the fort and transform it into an important and useful military installation. The fort's walls were severely damaged after years of bombardment. They were once again made level and reduced in height. The walls were then carefully rebuilt. The original design of Fort Sumter had a third tier used for gun emplacements. The third tier was removed. Almost all of the first-tier gun rooms originally found at the fort were restored. Starting in 1876 and ending in 1897, Fort Sumter was utilized as a lighthouse station that was unmanned. During the Spanish-American War, the U.S. Army considered once again utilizing Fort Sumter for military service. An effort began to restore all aspects of the fort that had fallen into ruin because of a lack of use. In 1898, a huge new concrete blockhouse installation was construction inside Fort Sumter. The fort did not see any action during the Spanish-American War.

World War I and II

In 2008, a telegraph message was discovered at Fort Sumter. The message had a date of April 14, 1861. It was from the governor of South Carolina and sent to a person in New York named Gazaway Bugg Lamar. One part of the telegram that has interested experts says, “Fort Sumter surrendered yesterday after we had set all on fire... F.W. Pickens”

The Fort Sumter Visitor Education Center at Liberty Square is open every day from 8:30 am. to 5:00 pm except for the holidays of New Years, Thanksgiving and Christmas Days. 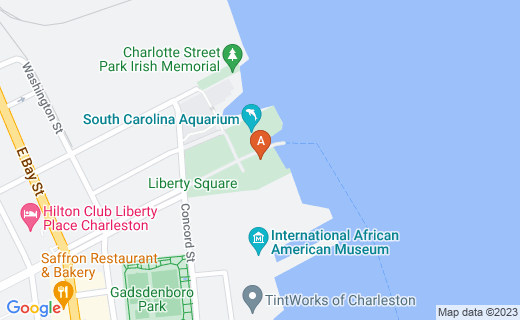 Allegiance: Fort Sumter, Charleston, and the Beginning of the Civil War
Buy Now