Visiting the Reichstag, Berlin: the history of Germany, past and future

Some verbal gymnastics, too

Berlin's beautifully restored Reichstag building, with its prominent inscription Dem Deutschen Volke (To the German people), where the German parliament first met in 1894, is one of Germany's most famous sights.

Except that its very name is today somewhat of an anomaly. The German word Tag refers to a parliament, but the term Reich is in some ways historically suggestive of a strong, central state, with a redolence that today's citizens of the Federal Republic of Germany do not tend to want to emphasize.

Following German unification, the Federal Parliament, the Bundestag , moved from Bonn to Berlin, and started to use this building for parliamentary purposes again, after the Reichstag building had remained divested of this function for several decades; indeed, it was badly damaged in 1945.

However, the resumption of the building's parliamentary association implied historical and constitutional nuances which were deemed to be critically important.

Using the Reichstag again after German unification meant restoring the historical aberration that 1933 signifies, when the Nazis found their own peculiarly cynical way of putting it out of use. It is strongly suspected that the Nazis burned the Reichstag in 1933; then contrived to blame a Jew for this act; then ignored the parliament as an institution.

Thus, using the Reichstag again after several decades was a consequence, arguably more or less inevitable, of German unification, after the nearby Brandenburg Gate was opened in 1989, causing Berlin Wall to be breached, and setting in motion the later unification of the two Germanies: the Federal German Republic and the German Democratic Republic. (Actually, it wasn't a unification of these two states based on legal equality, but rather it proved to be the absorption of one by the other.)

Not calling the Reichstag by its name

But part of the deal, in using the Reichstag again, was not calling it by its name, at least, in institutional terms. Not calling the institution which it houses the 'Reichstag' signifies historical and constitutional continuity with the 1949 Grundgesetz (Basic Law) of the Federal German Republic (thus named because it was deemed provisional).

So what does the Reichstag represent?

So what does the Reichstag represent? a coming to terms with the past? or an unwillingness to do so? It is very significant that for Chancellor Konrad Adenauer (in office 1949-1963) would for years proclaim Wiedervereinigung (reunification) as a professed aim of his Christian Demoratic-led government, all the while gradually integrating the Bonn-based Federal Republic's institutions and economy with those of Western European countries. After the East German government opened the Brandenburg Gate in 1989, however, the term Wiedervereinugung was conspicuous by its absence among the Christian Democratic leaders of the Federal German government, led by Chancellor Helmut Kohl. Instead of talking Wiedervereinigung , they talked Vereinigung (unicfication) instead. Unity, with rather a different emphasis. The German Democratic Republic was to be absorbed by the Federal authorities. Clearly, the provisional Grundgesetz was provisional no more. Which begs the question, Why did it have to be deemed provisional in the first place in 1949? and why wasn't it called a Verfassung (constitution) in the first place, too?

Part of the answer seems to lie in that Federal German leaders in recent years wanted to keep as much continuity as possible with their current institutions, even if in practical terms it meant a continuity of the provisional discontinuity seen in the 1949 Basic Law. But part of the word game (to use a Wittgensteinian concept) involved not calling the Reichstag by its name, at least, in institutional terms.

So what happened? As Wittgenstein said, 2 + 2 = 4 if everyone agrees that 2 + 2 = 4, and so everyone hastily agreed that what the term Reichstag would really mean from thenceforth was the building. Originally, the term Reichstag referred to the both building and the parliamentary institution for which it was built. From German unification onwards, the institution in it would be the institution which had sat, provisionally, in Bonn: the Bundestag.

So when one suggests that the Reichstag is a symbol of both Germany's past and future, one must also try to determine which past? and which future? because the linguistic exercises surrounding the Reichstag's resumed use reveal certain obscurities. Or, stated differently, Why is there still such a thing as an often commented upon Ossi mentality (referring to people from the former East Germany), if in fact the former East Germans supposedly do identify with the provisional-but-not-really Basic Law of 1949?

I hasten to add that, in referring to these various verbal gymnastics surrounding the coming together of the Two Germanies (Wiedervereinigung versus Vergeinigung , Grundgesetz versus Verfassung , Reichstag versus Bundestag , and so forth) it is not being suggested that there is necessarily dishonesty involved. But rather, their existence underlines the complex history which the German people and their leaders have had to confront.

So it is really a question of, Wait and see what these linguistic nuances eventually turn out to have meant.

Thus I walked all round the Reichstag building, a thought-provoking exercise.

Humboldt University of Berlin (Humboldt-Universitaet zu Berlin ; distance: 2.0 kilometres) is one of the world's great academic institutions, which was founded in 1810. Associated with this university have been 40 Nobel prizewinners, including Albert Einstein (later forced to moved to Princeton, New Jersey). In recent years there has been restoration of the pillared stonework of the No. 6, Unter den Linden entrance.

Brandenburg Gate (Brandenburger Tor ), Berlin (distance: 0.4 kilometres), the historically important structure which used to mark the border between East Germany and Berlin-West, and which was opened by East Germany's authorities in December 1989.

Potsdam (distance: 36 kilometres), possesses historic palaces; the scene of the far-reaching Potsdam Conference, between American, Soviet and British leaders in 1945.

Frankfurt an der Oder (distance: 103 kilometres); its City Hall is in Gothic style; its landmark Friedenskirche is a church with twin spires. In 1631, this city saw a Swedish battle victory over Holy Roman Empire troops. 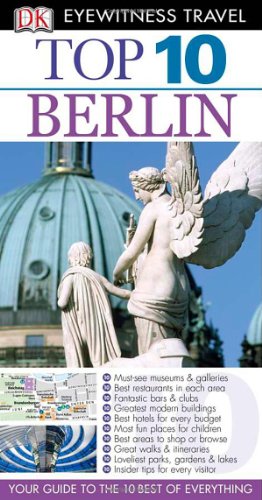