Visiting Cobh, Ireland: picturesque harbour town with a tragic past

Deep impressions go beyond those of the scenery

This town, on Cork Harbour, can cause deep impressions on the visitor. Indeed, the prospect of the town, with its spire of St. Colman's Cathedral (Irish: Ard Eaglais Naomh Colmán), seen from the waterside, is striking.

Remembering the Irish Famine and the 'coffin ships'

But it is Cobh's historical memories of multiple tragedies which are equally likely to impress the visitor. In the 19th century, Cobh, then called 'Queenstown', was known as a port from which the mass emigration of Irish people occurred, particularly as a result of the Famine of the 1840s. The term Irish Famine is one which in itself carries its own deeply sobering resonance, but Cobh was the port noted for its so called 'coffin ships', on which hungry emigrants would be packed in intolerable conditions, to sail for North America. Those passengers who did not die as a result of food deprivation, or disease on account of the cramped and unhygienic conditions, thus arrived in North America with experiences of great suffering and were to pass on a legacy of historical memories to later generations of Irish Americans and Irish Canadians, which profoundly marked their collective outlook.

Fast forward to 1912, and Cobh was the final port of call of the ill-fated RMS Titanic. The imagination can easily be stirred to think of this ship, in 1912, receding over the horizon on its maiden voyage, which was also to be its last.

Thence to 1915 and World War 1, and the American cruiseliner, the Lusitania , was torpedoed off Ireland by a German submarine, with the loss of 1,198 lives. In Cobh, the poignant Lusitania Peace Memorial , in Casement Square, is a reminder of this tragic event. Just as the attacks on American shipping off the Barbary Coast in the early 19th century led to the permanent formation of the US Navy, so the sinking of the Lusitania was one of the seminal events which led to the decisive intervention of the United States two years later in World War 1.

In the town today there is a museum where its history has been recreated: 'Cobh -The Queenstown story'. This museum is situated in Cobh's old railroad station.

Visiting Cobh can be an impressive experience for the visitor in a number of ways: whether in remembering the tragic coffin ships which left there for North America; or whether in looking at the Lusitania memorial recalling the tragic fate of this ship, the sinking of which contributed to the entry of the United States into World War 1; or not least from a scenic point of view, with the tall spire of St. Colman's Cathedral overlooking Cork Harbour. I came away from Cobh knowing my visit would be hard to forget.

As mentioned, above, Cobh's English name was 'Queenstown'. In Ireland under British rule, 'Kingstown' was the English name for Dún Laoghaire , while 'Queenstown' replaced the old Irish name of Cobh. In 1922, the Irish Free State (Saorstát Éireann) officially brought back the town's Irish name.

Except that, strictly speaking, the proper Irish name of the town is An Cóbh, so even today, the two versions of the name, Cobh and An Cóbh , exist side by side.

Fota House and Gardens, on Fota Island (Irish: Oileán Fhóta ; distance: 5.5 kilometres) is a recently restored Regency mansion, with longstanding associations with golfing. The nearby Wildlife Park was opened in 1983 by the President of Ireland.

How to get there: Aer Lingus flies from New York and Boston to Dublin Airport, from where car rental is available. Bus Éireann operates bus services to Cork City from Dublin's Busárus (bus station). Irish Rail operates rail services from Dublin Heuston Station to Cobh via Cork City. Ferry links with Roscoff, France are maintained from Cork Ferryport. Please check with the airline or your travel agent for up to date information. 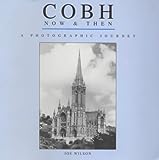