Ships and aircraft have been longstanding features of the locality

Gravenhurst, Ontario, situated on Lake Muskoka, in the region also named for the Lake, is well known for its association with the steamer RMS Segwun. Its sister vessel the Wenonah II is also berthed at Gravenhurst.The SS Sagamo was also formerly a well known sight on Lake Muskoka.

The original 19th Century vessel which was later called RMS Segwun was named the SS Nipissing — originally a paddle steamer — in the days when the area's roads were poor, making travel by steamer more advantageous. However, by the 1920s the vessel was deemed to required a complete overhaul and it was named the Segwun after its rebuilding.

Today the emphasis is on pleasure sailing, and — though I myself have sailed on a more modern boat on Lake Muskoka — for many years already, Gravenhurst residents, summer visitors to Lake Muskoka, and boating enthusiasts have greatly enjoyed sailing on this remarkable old vessel.

Various proposed names for the airport near Gravenhurst

The Gravenhurst area also has aviation heritage. The town's local leaders were partly instrumental in the planning and opening of what is now Muskoka Airport. Construction began in 1933 and the Town asked that it be called Ferguson Airport after a local aircraft owner, but the Dominion Government preferred to name it Reay Airport, since Reay Post Office was nearby. The Town then proposed that it be called Gravenhurst Airport — surely some civic rivalry there? — but eventually the Dominion Government emerged with the definitive name 'Muskoka Airport'.

Except that during WW2, Muskoka Airport was also called by another name...

The other name by which Muskoka Airport was known was Little Norway, or — in Norwegian — Lille Norge. After their homeland was overrun in 1940 by Nazi invaders, many members of the Norwegian fighting forces went into exile with a view to joining the Allied nations in their struggle against the Axis powers. Some thousands of aviators and air personnel from Norway were trained at the Little Norway facility. In fact, there were two Little Norways; first, in Toronto, and later, from 1942, in Muskoka.

I was intrigued when I first learned of the existence of this Norwegian training facility, because Little Norway is actually situated close to where my wife lived for many years. Indeed, an uncle of hers served as a pilot trainer in WW2, in the Commonwealth Air Training Scheme, negotiated by Canadian Prime Minister William Lyon MacKenzie King in 1939 and extended later to include the personnel of other Allied nations. This is how thousands of aircrew from the Royal Norwegian Air Force came to Canada at the successive sites which became known as Little Norway. The High Command of the Royal Norwegian Air Force were very closely involved with Little Norway's operations and in May 1942 Crown Prince Olav (later King Olav V of Norway) visited the Muskoka facility for its formal opening. A plaque erected by the Historic Sites and Monuments Board of Canada commemorates the Canadian-Norwegian collaboration at Muskoka Airport.

It strikes me from a topographical perspective that the Norwegian aviators would have found the tree-lined lakeshore scenery of Lake Muskoka and nearby Georgian Bay in general terms at least similar to some of the topography of Scandinavia, to which they would have been accustomed. In such surroundings, and making common cause with Allied forces, attempts to make them feel 'at home' would doubtless have been in a measure eased by these factors.

The Royal Canadian Air Force, too, had a presence in the area, in the shape of a convalescent home at Marmilwood, on Lake Muskoka. This facility, originally owned by the Easton store family, operated from 1942 to 1945.

The contribution of Marmilwood to Royal Canadian Air Force personnel convalescence in WW2 has been detailed in J. de Visser and J. Ross's Shelter at the Shore: The Boathouses of Muskoka.

Also worth seeing at Gravenhurst

How to get there: Muskoka Airport operates mainly as a general aviation facility and Toronto Pearson Airport, to which Air Canada and WestJet fly from many North American destinations, is the largest international airport within accessible distance to Gravenhurst, situated approximately 180 km north of Toronto by road via Highways 400 and 11. Car hire is available at Toronto Pearson Airport. Please check with the airline or your travel agent for up to date information. 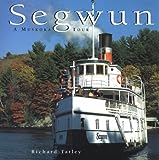