Remembering the Dieppe Raid of 1942

The Canadian memorial at the small English port town of Newhaven, East Sussex, bears testimony to the military contribution of Canadian forces in World War 2, particularly those involved in the Dieppe Raid.

Following the costly but effective Raid on St.-Nazaire in March 1942, Admiral Lord Louis Mountbatten of Combined Operations Headquarters wanted to demonstrate and test the capacity of Allied infantry, and naval and air forces in an operation designed to seize a French port.

So at Newhaven, thousands of mainly Canadian troops of the 2nd Canadian Infantry Division mustered and set out for Dieppe, in Normandy, France. Yet of the over 6000 troops who took part in the Dieppe Raid on August 19, 1942, nearly 60% were killed, wounded or taken prisoner. The intention had been to capture and hold the port of Dieppe, to test the German response, in preparation for the eventual liberation of France. This aim was not achieved and the staggering losses marked a low point in Allied fortunes in World War 2, and national tragedy for Canada. But the by then battle experienced 2nd Canadian Infantry Division subsequently distinguished itself in the Normandy Landings in 1944 and other engagements toward the close of World War 2.

It is often forgotten just how new a concept in warfare were amphibious landings in World War 2. For 1944, with the immensely costly but ultimately — in retrospect — savagely poignant but constructive experience gained by the Dieppe Raid of August 1942, in addition to the Allied North African landings in 1943, military planners were able to draw up strategies and tactics which proved successful in dislodging the Nazi German occupiers from Normandy. However the precise military value of the severe lessons of the Dieppe Raid is still vigorously debated by military historians.

In addition to Newhaven's Canadian Memorial, the museum at Newhaven Fort may be visited. This fort was originally built in the mid-19th century to defend the port of Newhaven. It served a military use until 1962.

Long before World War 2 and in subsequent years, Newhaven has served the peaceable purpose of a English Channel port link with Dieppe, France. The mayor of Dieppe, and Canadian, British veterans' organizations, meet annually at Newhaven to commemorate the great sacrifice made on August 19, 1942.

From Newhaven I made a number of trips to Dieppe, France, in rather more peaceful circumstances than those of August 19, 1942. I also travelled to England from Paris via Dieppe and Newhaven, this crossing marking the shortest surface link between Paris and London.

Lewes (distance: 11 kilometres) with its castle, its steep, picturesque roads and old churches, is a most picturesque and historic English town. North Americans of Irish extraction may recall that Ireland's veteran leader, Eamon de Valera , was once incarcerated at Lewes prison. On November 5 every year, a large bonfire event is held at Lewes as part of a tradition which has its origins in commemorating the burning of Protestants in the 16th century under the reign of Queen Mary I .

The Royal Pavilion at Brighton (distance: 16 kilometres) has attracted many visitors for the best part of two centuries.

Eastbourne (distance: 25 kilometres), with its pier and its cliffs known as Beachy Head , is regarded as the main resort of the Sunshine Coast , because of its high average of sunny days.

Pevensey (distance: 32 kilometres), with its ancient Roman and Norman castle, and quaint village with a former royal mint, was historically known as a Limb of Hastings , one of the Medieval Cinque Ports .

How to get there: Continental Airlines flies to London Heathrow Airport, where car rental is available. (Distance from London Heathrow to Newhaven: 128 kilometres.) For access by road, take M23/A23/A27/A26. There are rail links to Newhaven Town and Newhaven Harbour from London Victoria railroad station. Please check with the airline or your travel agent for up to date information. 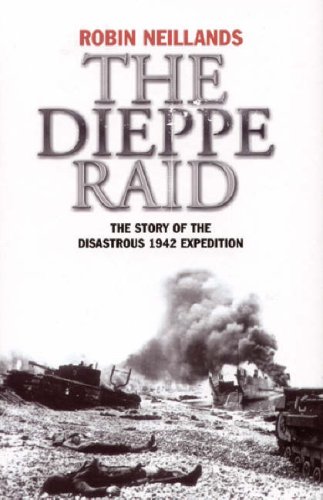 The Dieppe Raid: The Story of the Disastrous 1942 Expedition
Buy Now