This picturesque, Medieval building in Norwich, Norfolk has become one this English city's most famous landmarks.

Generations of visitors to this city with many, fine, Medieval structures, have included Pull's Ferry on their itinerary (1). Numerous pictorial calendars, including both those of a regional and of a national scope, have displayed views of the Medieval structure, to the extent that images of this building will be familiar to many people who have never visited Norwich or Norfolk.

Pull's Ferry retained its original, practical function right up to the middle of the 20th century: a ferry did indeed continue to operate here until 1943.

The structure is named for a long-serving ferry operator, who plied across the Wensum River for 45 years from 1796.

The building is 15th century, and the material in which it is executed is flint: for centuries a popular building material in Norfolk. The rugged, tiled roofing is also widely used in the area. However, as a site for river-borne goods, the location of Pull's Ferry is known to have been the reception point for stone, shipped from France, used to build the 11th century Norwich Cathedral, adjacent to the Close of which this building now stands.

Thus, the tranquil, photogenic scenes surrounding this ancient building stand in contrast to its situation in the Middle Ages, when what is now known as Pull's Ferry was a hub of activity and commerce, in an era when water-borne traffic was far more common, and when rivers constituted a more attractive course of transport than roads, which were so often of poor quality.

Adjoining this Medieval watergate is a ferry house, which was built in 1647. Interestingly, both the ferry house and the Medieval archway were restored by an architect, Cecil Upcher, in the years 1948-49; this gentleman subsequently resided in the ferry house. As a desirable address for someone professionally engaged in the upkeep of buildings, this property much surely be second to none!

(1) Visitors making a day-trip to Norwich by rail are facilitated by the relatively short distance of Pull's Ferry from Norwich Thorpe Railroad station. The proximity of the Riverside Walk enhances access to the structure via Bishop Bridge. If you visit Norwich, this is highly likely to be one of you must-see locations: visitors to the city must be prepared for their English friends to ask: "You went to Norwich? did you see Pull's Ferry?"

How to get there: United Airlines flies to London Heathrow Airport, where car rental is available. Norwich is served by rail from London Liverpool Street Station. Norwich is 233 kilometers from Heathrow Airport. Please note that some facilities may be withdrawn, without notice. Please check with the airline or your travel agent for up to date information. 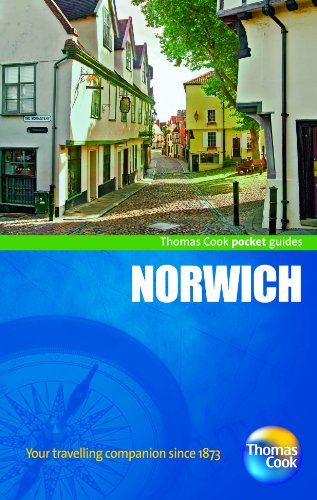