Saint Tropez is a municipality at the center of French Riviera or Cote d’ Azure (Blue Coast), in Southern France. The place offers a medieval community with beautiful beaches, fine weather, delicious foods and a lot more.

Saint Tropez has been one of the most glamorous vacation place of famous celebrities and rich personalities. They simply spend time hanging out with friends and relatives on a luxury yacht deck while enjoying the heat of the sun and sipping their martinis. Brigitte Anne Marie Bardot, a French actress, dancer, fashion model and singer, played an important role in the liberation of Southern France in WWII. As a result, she became an icon of the municipality in her time.

Early years of 20th century, the industry of Saint Tropez focuses on small scale fishing and on shipping. As a result, the place became the main commercial port of France. Other local traders started to bring cork, wine and wood.

In 1944, the port was seriously destroyed because of the WWII. It then became the central site of “Operation Dragoon”, which served as a beach landing in the Allied invasion of the Southern France. Just after the war, the port was rebuilt as a commercial port turned to a tourist spot.

Due to the exposure of the town in different films such as “Et Dieu… crea la femme” or “And God created woman” starring Brigitte Anne Marie Bardot, the place received various international recognition. In 1950, Saint Tropez became a French summer retreat place. Even Bohemian artists, such as actors, painters and writers, living in Paris had their summer quarters within the area which made the place more popular today.

Must Visit Places in Saint Tropez

The citadel was built in 17th century for the purpose of guarding the whole town. The dungeon of the citadel was then converted into a museum, which showcases the rich maritime past of the town. All information inside the museum was presented in both English and French language. It opens from 10:00 am to 6:30 pm. Per entry to the museum costs 3 Euro for adults and free for children under 12 years of age.

It is an open air Provencal market which offers variety of freshly produced foods such as breads, cheeses, fruits, herbs, pastries, olives, sausages, spices and vegetables. There are also high quality souvenir items and stylish fashion accessories available in the market as well. The market is open every Tuesday and Saturday at 10:00 am to 1:00 pm and 2:00 pm to 6:00 pm.

The place has been a favorite hangout location for celebrities who love playing “Petanque” during summer.

Other Markets Nearby the Area

Ramatuelle is a medieval village of Saint Tropez, situated on top of a wooded hill above vineyards. One of its attraction is the fountain built in 18th century to provide water to Ramatuelle’s residents. Joseph Bernard, the municipality mayor, ordered the construction of the new fountain in 1905.

It is called the “Village of Flowers” because of its colorful collections of flowers and plants such as chamomile, eucalyptus, yellow mimosa and oleander. This Provencal village has a picturesque view of tis architectural heritage. There is a guided tour available for a minimum of 4 person. Cost per person is 7 euro for adult and free for children.

It is called the “Little Venice” of France. The place offers networks of small canals, little bridges and narrow alleys. Lies within the area is Grimaud Castle, 11th century castle with a very steep summit and strategic location. The castle presents the art, culture and history of the place.

It is one of the finest Cistercian architecture built at the latter part of 12th century. The monastery is one of the “Three Sisters of Provence” --- Senanque Abbey and Silvacane Abbey. Entrance fee costs 7.50 Euro for adults; 4.50 Euro for ages 18 to 25 years old; and free for minors under 18 years old.

This 16th century chapel is also known as chapel of the “White Penitents”. The chapel was abandoned and eventually restored during 60’s. Next to the chapel is a graveyard.

It is a natural site with a beautiful coastline and a criss-crossed walking trails. One of the best places in Saint Tropez to spend a holiday vacation.

A scenic beach near the harbor close to the Old Town of Saint Tropez. The best place to enjoy the wonder view of the area.

The museum is a former chapel that shows wide collection of artworks. It is open from Tuesday to Monday at 10:00 am to 6:00 pm. Entrance fee for full price is 6 Euro and for group or discounted price is 4 Euro. 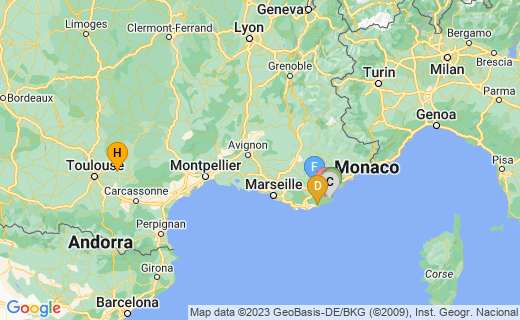 A Marketplace for freshly produced foods

A Medieval Village on top of a wooded hill

A Village of Flowers

The little Venice of France

One of the Three Sisters of Provence

The chapel of White Penitents

The Headland of Capon

A scenic beach near the Old Town

A chapel turned into a museum

Best Places to Visit in Italy and France