Visiting The State of Missouri

"The mind of man plans his way, But the LORD directs his steps." Proverbs 16:9

From our plans to Africa we landed in the State of Missouri. The reason for this destination is found in Froggy's hub: A New Mission For Grandpa. It was not a vacation trip, but while we were waiting for "things" to happen, we decided to use that time in a educative way and nourish our mind and spirit, instead of giving path to anxiousness and allowing it to take control.

Enjoy with us our visit and findings of the amazing State of Missouri, since its nickname is "The Show Me State" we will show. 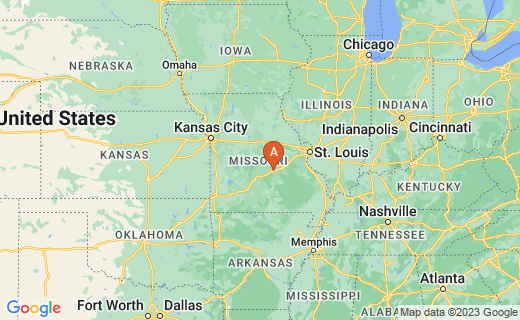 Where in the world is Missouri?

In the Midwest of North America is found Missouri; the 24th State of the 50 United States. This union took place on August 10th, 1821, after being settled in 1735 at Sainte Genevieve. Some facts about Missouri State:

Missouri is the place for you If you appreciate bridges like I do. It has about 400 bridges currently eligible for the National Register of Historic Places. It is comprehensible by all the bodies of water surrounding and intersecting through the 68,886 square miles of land pertaining to the State of Missouri. Some of the bodies of water are the:

The Gasconade River is the longest river completely within the boundary of Missouri, and it has been called one of the most crooked in the world.

Hannibal is located in Marion and Ralls Counties in the State of Missouri. It is the boyhood home of Samuel Langhorne Clemens known as Mark Twain (1835 - 1910). Froggy213 (my husband) wrote about this place in his hub linked to the picture at the side. We invite you to read and take the journey from the wonderful sights captured in pictures.

St Charles of Missouri named the county and city in honor of an Italian saint and cardinal of the Roman Catholic Church: St Charles Borromeo (1538 - 1584). This county was created on October 1, 1821 as one of the five original counties.

It is a historical place where the city preserves much of the past. Its architecture and garden are commendable and inseparable.

August A. Busch Memorial Conservation Area is located in St. Charles County. In the early 1940s, the area was used by the Department of Army as a TNT munitions plant to support World War II.

This area was purchased by the Missouri Department of Conservation in 1947 from the federal government. Mrs. August A. Busch, Sr. donated a portion of the area as a memorial to her late husband.

The Regional office is in St. Louis which includes a visitor center with very interesting displays of great wildlife information. The 3,000 acre of this conservation area offers:

St. Louis is located in the East Central part of the state on the Mississippi River. It was founded by the French in 1764. It is the second largest city in Missouri. The city is independent and it is not part of any county.

Standing on the banks of the Mississippi, symbolizing St. Louis as the Gateway to the West, is found the perplexing Gateway Arch. This is the tallest man made national monument. The Arch is made of stainless steel measuring 630 feet wide at its base and stands 630 feet tall. Visitors ride a tram to the observation room at the top.

This is one of the best parks I have ever visited. The lake which offers its edges to be circled by bicycle, jogging or walking on trails, makes a wonderful getaway for anyone.

Saint Louis Creve Coeur Lake Memorial Park is formed by a space of 320 acre lake where boats and fishing take place. It is delightful the laughter of children with the enjoyment of diverse playgrounds. A great park for a family picnic, exercises, or moments of relaxation with nature.

The St. Louis Zoo since 1910 is one of the few free zoos in the United States. It is located in the 1,300 acre of Forest Park, where the city's top cultural institutions are found and host many of the region's favorite events and pastimes. Some of the reasons to visit the Saint Louis Zoo is because:

Did you enjoy visiting the State of Missouri with us?

The State of Missouri has more to see than what i have presented in this hub. The weather is really high in summer and everyplace is separated by many miles. On my next visit (if I do) I will try to visit more places like:

I did get "Homesick" but it really was worthy! Our destination was fulfilling in many ways. I do recommend this state as a marvelous get away destination.

The State of Missouri