Visiting the Isle of Wight England

Heading to the Needles

Where is the Isle of Wight?

The Isle of wight is that small island that sits in the middle of, about halfway across, the south coast of England.

As locals on the Isle of Wight call England the North Island perhaps we English should reciprocate and call Wight the south island?

However the Isle of Wight is English.

The currency is the same as England and the language is English however the island’s location gives it a more distant feel.

The Isle of Wight sits close to England 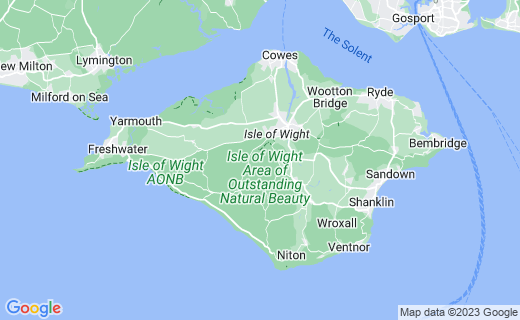 About the Isle of Wight

The Isle of Wight is classed as part of the county of Hampshire.

It is separated from mainland Britain by a deep strait known as the Solent.

Newport is the capital and administrative centre of the Island.

Politically the island and mainland Britain are the same. Westminster rules the Isle of Wight as it rules England

The climate is similar to the rest of southern England but it can be windy at times.

Today’s Isle of Wight weather forecast for the coming week

Although our coach holiday included some trips around the island we also travelled around on local buses.

The main bus station is in the island’s capital Newport.

Some buses operate an almost circular loop service. This gives good access around this small island.

A bonus for us was our free bus passes were valid on these buses.

This enabled us to hop on a bus, visit a place, and then hop on again to go to the next resort, village or town.

How we got there

We opted for a seven-day package coach holiday.

The price included our coach journey to the island, a ferry crossing, travel to our hotel in Sandown, accommodation at the hotel, including breakfast and an evening meal and also included were a couple of coach trips around the island.

It was a long day travelling to this island

We set off around 7am and were not in our hotel until after 5pm and we had made good time.

The ferry crossing is only a little over an hour but it depends on the weather. Then there is the ferry timings and we were lucky as we arrived early and took an earlier than scheduled ferry.

The package price was pretty good but the hotel was tired and in need of refurbishment. These coach holidays often use such hotels.

We enjoyed our holiday but plan to return to the Isle of Wight as independent travellers. That may cost a little more but will be even more enjoyable.

One of our day trips was to the Needles

Our first organized trip was Monday but the weather was grey and it was drizzling. We expected to be disappointed but were not.

Godshill is a charming if somewhat touristy village.

There is a long road and a path with a variety of shops and cafes.

The shops have a great range of goods.

The model village has a large gift shop attached.

We thought the model village would not be anything special but we were wrong.

It was a fascinating place with a lot of detail. There were tiny models of people in this village and they are moved around by staff daily.

The tiny trees and shrubs are exceptionally well maintained.

There is even a model of the model village and its surroundings on display.

It is a pay to enter attraction but is not expensive.

There are reductions for family tickets, children and seniors plus if you keep your ticket you can visit again during your Isle of Wight stay.

The final attraction here is by way of a steep path and some steps. It is the village church and its nearby thatch roofed cottages.

The area is very pretty and well worth the steep walk up.

There is more and here are just a few