Bourton on the Water, in the Cotswolds, and River Football

I always try to look out for lesser known, interesting, or quirky attractions in any area I visit. It's different, and it avoids the crowds.

Bourton on the Water is a particularly charming Cotswold village, and some would say it's the prettiest village in England. It lies in an area, the Cotswolds, that has its own characteristic architectural style with houses and cottages dating back 300 or even 400 years.

It is an enchanting place, peaceful and captivating.

Where and What are the Cotswolds

The Cotswold Hills lie in an area of southern central England, an Area of Outstanding Natural Beauty, an AONB for short. An AONB is protected, a conservation area, in this case because of the rural landscape and villages built from the warm Cotswold stone. The underlying stone was not only used as building material for about 6000 years but it shaped the countryside around by governing where settlements grew up.

Most of what are now considered to be typical of Cotswold cottages date from the late 16th or early 17th century. Before that, the costs of quarrying the honey coloured limestone were great so that only people who could afford grand buildings, such as those in Bath, could use it.

The area depended on the wool trade for its wealth and the weavers and other agricultural workers lived in wooden hovels. When limestone became more affordable, it was used to replace the wooden cottages. They weren't built by the master builders but by apprentices and this led to the less "polished" look of the limestone. The blocks were rough-hewn and these give the cottages their typical look.

These were modest properties, not the highly desirable dwellings they are now. First of all they were single storey but later a second storey would have been added with dormer windows in the gable ends, and ladders to reach the upper floor. Several households would have lived in one building.

The transition from workers' dwellings to desirable properties came much later, especially after a visit to the area by William Morris, founder of the Arts and Crafts Movement, when he described Bilbury as the most beautiful village in England. (Sorry about that, Bourton!)

The Water of Bourton on the Water

The river that runs through the village is the River Windrush. It looks calm enough.

It is fed by many springs along its route through the Gloucestershire countryside and the heart of England. In Bourton it passes under some beautiful bridges, some of which date back to the 17th century. It then carries on through a number of other villages, including Windrush itself, and shortly after that it joins the Thames.

Children very rapidly realise how shallow it is. The river averages only around 10 inches in depth, and this is the key to one of the big events of the year.

One of the attractions in Bourton on the Water is the Model Village which you can find behind the Old New Inn. It is an accurate model of the village, including a running river, as it was in the 1930s. It took five years to build and was officially opened in 1937 by the then King and Queen.

It is thought to be the oldest model village in England and has been listed Grade II by Historic England. It is an accurate 1:9 scale model of the village as it was in 1940, built in what was once the vegetable garden of the (Old) New Inn.

If you'd like to visit, here are details of the Model Village.

It puts me in mind of the rhyme written by the mathematician Augustus de Morgan as an illustration of recursion:

Then the Peace is Shattered - River Football!

On August Bank Holiday, the last Monday in August every year - 31 August in 2015, a game of football is played IN the river. The goal posts are in the river, the players are in the river. Sometimes one or two of the spectators are in the river too. Look at the people standing in the water to the left of the picture, perilously close to the action.

The game that is played bears little resemblance to any form of football normally played. There are six on each side and it's a match of two 15 minute halves. There don't appear to be too many rules.

This video shows the match from 2008. The weather forecast for the 2012 match was rain. I don't think anyone noticed.

Bourton on the Water and Some Places of Local Interest 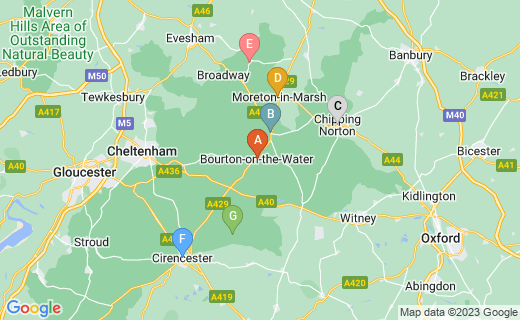 B
Stow on the Wold:
Stow-on-the-Wold, Gloucestershire, UK