Visiting the Parish Church of St. Michael in Southampton, England

The Church of St. Michael the Archangel is the oldest building in Southampton England. It is situated in St. Michael’s Square. This Norman style church was built by the Normans in 1070. Modifications were already made since the original construction of this church.

Being the oldest structure of the place, the church witnessed the history, including all the struggles and prosperity of the town, of Southampton. Absolutely, a town’s pride because St. Michael’s Church was able to survive two World Wars.

Did you know that the Church of St. Michael has a two manual Walker organ? These are Bechstein Model C piano and Harpsichord.

The Norman Tower is the remains of a 12th century gravestone of the Norman Church. The gravestone has a carving of a Bishop in mass vestments holding a crozier. From the inside of this Norman Tower, a massive proportions of the arches and walls lead to the Norman chancel or presbytery, nave and side aisles. In 1890, the Celtic motifs iron grills and gates were added in the structure.

Sir Richard Lyster was an English Judge, a Chief Baron and a Lord Chief Justice of Common Pleas to Henry VIII. He was considered as one of the richest men in Southampton during his days. Lyster was married to a widow named Isabel Dawtrey. She was a successful merchant and the owner of Tudor House and Garden. After the death of Isabel, Sir Richard then re-married to Elizabeth Stoke. In 1554, Lyster died and his wife erected his monument inside St. Michael’s Church.

Josefina De Vasconcellos was an English sculptor with a Brazilian origin. Few of her famous works are Holy Family, Mary and Child, Nativity and Reconciliation. In 1964, she was commissioned to make the statue of St. Michael. The statue was made of Spanish Yew, a specie of tree. The statue shows the devil is depicted as fire.

Inside the church, lies a 13th century stone coffin by an unknown knight. His sword is displayed on the lid. There’s also a headless figure of a bishop holding a crozier which stands beside the presbytery. Another small stone plaque which bears the monogram of the Wool Staplers Guild. This small stone can be found on the side of the window.

One of the brass lecterns, mid 14th century, was found in the ruins after the bombing of Holy Rood Church during the WWII. This brass was painted in brown to give the appeal of wood. Many people believed that this can be the oldest brass lectern in England.

Other believed that the St. Michael’s Lectern in the Lady Chapel of mid 15th century was made to receive the annual tribute of 1 penny paid by the Pope. As a result, it was also known as “Peter’s Pence lecterns".

East Window of Lady Chapel Late Victorian depicted the scenes from the New Testament: the annunciation, the nativity, the presentation of Jesus in the temple and the Boy Jesus instructing the elders in the temple.

Central East Window showed Christ in majesty in the centre with the two Archangels St. Michael and St. Raphael. Beside them are Virgin Mary, Apostles and Old Testament Prophets.

West End of South Aisle Window was made out of the fragments salvaged after the bombing of the east window. One of the created fragments showed St. Michael slaying a beast like devil, presented as a winged ape.

Central West End Window showed the emblems of both combatant and non-combatant who were active during the WWII. This window also showed St. Michael slaying the devil, presented as a dragon. It was designed by Quentin Noel Blay in 1951.

Did you know that the Church of England proposed to close the Church of St. Michael? However, this move didn’t push through because of a charity that was set-up not only to preserve the church, but also to support other locals such as the music scholars of Southampton University. The name of the charity is the Friends of St. Michael’s.

The Jacobean Cupboard was positioned under the window at the east end of the south aisle. An inscription was written on this cupboard and it stated that “John the Sonne of John Clungeon of this towne Alderman Erected this presse and gave certain books who died anno 1646.” The cupboard is made of wooden pegs, glue, lock and hinges of iron.

The Baptismal Font was made of black marble from Tournai in Belgium. As noted, there were only seven black marble fonts all over England. These were imported from abroad by Winchester Bishop Henry Blois and King Stephen’s brother. 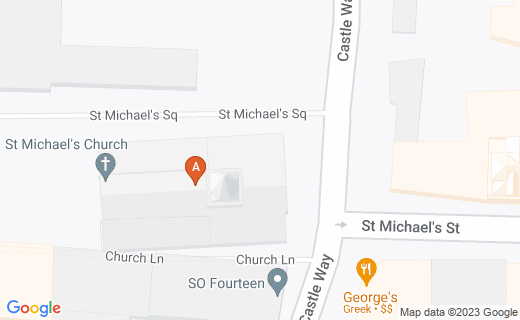 The oldest structure in the Old Town of Southampton, England.

My Visit to the Church of St. Michael

Just like any other churches in Europe, going inside of this very old church can really be creepy. Not only because of its design, but the existence of monuments and other old relics will definitely give chills to someone. As anybody can truly feel the past or the history of the place.

Being in this place wasn't my original plan, I just stumbled upon this before going to the mall. Though, finding myself inside the church was just a perfect timing for me as I prayed for my Grandmother's soul. She died two days before my visit. I took time to pray and to get some of their stuffs. In return, I donated a small amount of money to help them as well. I would highly recommend the place to everybody. It won't take an hour to visit the place anyway.

Have You Ever Been in the Church of St. Michael?