Visiting the castle at Sedan, France: Medieval memories and remembrance of the fall of the Second Empire, 1870

Tumultuous events over the centuries

The great fortress at Sedan has an amazing history.

Its origins are Medieval. The first recorded fortifications are of a manor built in 1424, and, later, considerably enlarged. The surrounding Principality of Sedan did not definitively become part of France until 1642.

During the 16th and 17th centuries, the city of Sedan was a place of refuge for Protestants, also hosting a theological academy, suppressed in 1681.

One of the major events with which the castle at Sedan is remembered historically is its role in the First Battle of Sedan, when it was surrounded by Prussian troops, after French Emperor Napoleon III had been led into a war against Prussia by the diplomatic subtleties of Prussian Minister-President Otto von Bismarck. This formed part of a chain of events which led to the capture of French Emperor Napoleon III, the fall of the Second Empire, the Commune insurrection in Paris and the eventual establishment of the Third Republic.

The aftermath of the First Battle of Sedan did not end in France. A united Germany was founded in the twilight of the Second Empire, given that Bismarck had managed to unite the German states in a technically defensive war against France. After the Franco-Prussian War, the German states united under the King of Prussia, proclaimed Emperor William I. Sedan Day continued to be celebrated unofficially until the end of the First World War, which also saw the demise of Germany's Second Reich and its Imperial system.

Sedan was also the focal point of another battle, known as the Second Battle of Sedan in 1940, in which, however, the castle was somewhat less prominent, owing to the increasingly mechanized nature of warfare. In the event, the city was captured, without resistance.

In Medieval times the scale of the castle was much more extensive than it is today. But it is still very large and, given its current size, it is able even today to fulfill a number of functions. Its walls house a 3 star hotel. A tourism office is based at the castle. In addition, a museum is housed here, with a section devoted to the Franco-Prussian War.

The city of Sedan is situated in northern France, on the Meuse River, in the Ardennes department. The border with Belgium is nearby.

At Sedan itself, its botanical garden (French: Jardin botanique de Sedan ), founded in 1875, is worth visiting. The Church of St. Charles Borromeo (French: Eglise de Saint-Charles-Borromée ) is an imposing 17th century structure, in Classical style, with twin towers; it was formerly a Protestant church suppressed after the Revocation of the Edict of Nantes in 1685.

Bouillon , Belgium (distance: 22 kilometres); scenic town on the Semois River, overlooked by a Medieval castle which is associated with Godefroid de Bouillon .

Guise , France (distance: 116 kilometres), a town which is strongly associated in history with dukes of the same name, whose castle in the town may be visited.

How to get there: Continental Airlines flies from New York Newark to Paris (Aéroport Paris-Charles de Gaulle ), from where car rental is available (distance from Paris-Charles de Gaulle airport to Sedan: 233 kilometres). Please note that facilities mentioned may be withdrawn without notice. Please check with the airline or your travel agent for up to date information. Please refer to appropriate consular sources for any special border crossing arrangements which may apply to citizens of certain nationalities. 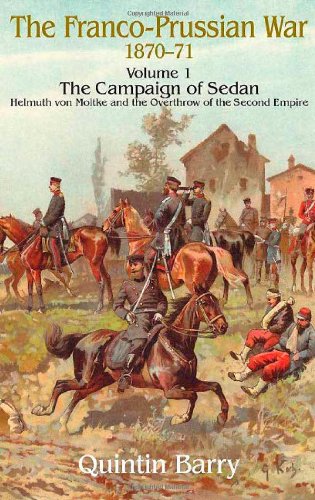 Franco-Prussian War 1870-1871. Volume 1: The Campaign of Sedan. Helmuth von Moltke and the Overthrow of the Second Empire
Buy Now