To many, visiting Washington DC is a once in a lifetime experience, but those of us who live a bit closer end up visiting much more often. What do you do in DC when you've seen the National Mall about as many times as you can stand? It may seem jaded to talk about getting tired of the National Mall, but after flying in and out of the DC metro area repeatedly at every university break, and having gone into the city nearly every time, there's only so many times you can walk the same square of earth without wondering what else the city has to offer. This is where the Smithsonian National Portrait Gallery DC comes in.

Just off the main walk is another museum which is often overlooked simply for having the misfortune of being off the mall. The National Portrait Gallery DC is a refreshing place to take new guests who want to "see" DC and the national gallery museums. It's a great museum and should be included on any standard route, and has the added bonus of being interesting even to old-timers who don't ever want to see the Hope Diamond again.

The National Portrait Gallery in Washington houses a collection of portraits of people who have influenced American history and culture. The organization of the museum is great - with rooms dedicated to various themes, and including people from America's founding, up to Calvin Klein as of a few years ago.

For a history buff, anywhere in DC is going to delight. But what can a music major or pre-med student do in Washington? Take a look at the founders of your chosen field at the National Portrait Gallery. As a psychology major, I had a swoon moment at the portrait of Dorthea Dix. As a fashion lover, I enjoyed the temporary exhibit featuring a video of Calvin Klein doing yoga (4 major cultural forces were invited to take a video of themselves doing anything in a white box). The National Portrait Gallery has a great gift shop where you can buy portrait gallery's prints of famous people from every discipline.

Of course there is the hall of presidents, but there are also portraits of artists, scholars, policy makers, social revolutionaries, and much much more. I would highly recommend any history teacher taking a class trip to DC to check out the National Portrait Gallery. It's an amazing experience to recognize the faces of people you've learned about for years. Any good class trip itinerary should include it.

You don't have to walk through the ghetto to get there either, it's only a few blocks off the national mall. See the map below. 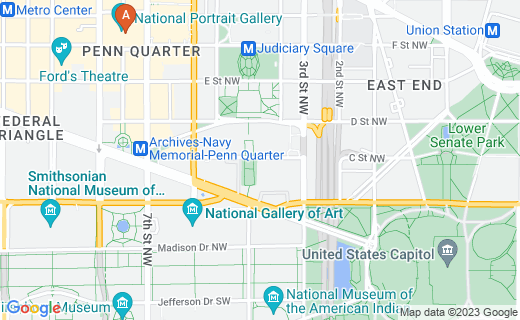 You can walk to the National Portrait Gallery if it's nice out, or take the metro to the Chinatown stop.

Also in the area are the International Spy Museum, The Verizon Center, and Ford's Theater. So if you're going to DC, don't feel confined to 3 square blocks! There is plenty to do just around the corner.

A Brush with History : Paintings from the National Portrait Gallery
Buy Now