Jennifer loves to explore local attractions and faraway lands and can often be found wandering in the many dense forests of Pennsylvania.

All It Takes Is A Little Imagination

Quite simply, the Gettysburg Battlefields are an extraordinary and awe-inspiring collection of beautiful views, legends, ghost stories, and incredible acts of human bravery and sacrifice. This bustling town situated in the heart of the battlefields is located in Southern Pennsylvania, approximately thirty minutes from the Mason-Dixon Line.

The backdrop of the deadliest battle of the Civil War- with a casualty count of 51,000 soldiers-Gettysburg is now a tourist town, and is dedicated to the education and entertainment of thousands of people per year. From the Presidents and First Ladies Wax Museum to the Jennie Wade House, these attractions have managed to draw massive crowds while still holding true to the legends of the battlefields themselves. These picturesque fields feature reconstructed Civil War-era cannons, tributary statues to the great generals and commanders of the battle of Gettysburg, and several historic structures that have outlasted the tempests of time.

It is not at all difficult to imagine the battle, which occurred during the sweltering early days of July, 1863. Harrowing accounts exist that detail the clashing of the Union and Confederate soldiers, resulting in the hasty Union retreat and eventual regrouping. Proceeding battles ensued at Culp's Hill, Little Round Top, the Wheatfield, and Devil's Den

As an inhabitant of Pennsylvania, I can attest to the ever-growing popularity of Gettysburg's innumerable ghost tours. It oftentimes seems that every part of the town itself possesses some sort of resident spirit or two, and tourists love this mysterious and dark aspect of the battlefields. But these tours exist for good reason; it has been widely accepted that the fields and town itself really ARE haunted (how can one remain a skeptic after visiting the Jennie Wade house, home of the only citizen killed during the battle?)

The ghost tours are mainly based inside of the town and along Main Street, but some adventurous tourists may find ones off the beaten path. The tours range in duration and intensity, and guides walk you through some of the most "haunted" locations in town. But in reality, most Gettysburg-ians agree that the spirits do not dwell in the Civil War-era structures that remain scattered throughout the community, but rather that they walk the battlefields themselves.

Such places that have been hailed as locations of spiritual activity are Devil's Den, the Peach Orchard, Little Round Top, and the Trostle Farm. Culp's Hill, which is a popular stop in the Gettysburg Battlefields Auto Tour, is also rumored to be haunted.

I have taken one of these tours myself upon moving to Pennsylvania. The tour guides are very informative and, most importantly, possess a love for their craft. Most of them seem to be capable storytellers, and if you're interested in taking a nice stroll after sunset while listening to the stories and legends of the battle, these tours come highly recommended.

Gettysburg is home to countless shops located along Main Street. I have been a resident of Pennsylvania for two years now, and I still have not been able to visit every single store (although I would like to someday.) These shops are fascinating, and contain such goods as Union and Confederate uniforms, Civil War-era artifacts, literature, artwork, and souvenirs. There is also a "vintage" photography store, where you are your party members are able to don the outfits of men and women whom had lived during the 1800's, and a souvenir shop whose owner- who can usually be seen behind the counter- is a jaw-dropping, exact image of Mr. Abraham Lincoln.

These little stores are wonderful just to get lost in, as their contents possess the ability to transport their admirers back in time.

The battlefields are, simply put, astounding.

Gettysburg really is a place of magnificent and tragic beauty, a location eternally submerged in melancholy. It is at its most beautiful (in my opinion) during the fall months, but for those individuals interested in experiencing the very atmosphere of the battle, it is recommended to visit during July or August.

The one aspect of Gettysburg that I truly enjoy above all others is the ability to tour the fields themselves on horseback. There are several stables located in the rural terrain of the town that will allow you to ride their horses throughout the battlefields, and some of these places even include a tour guide or some form of electronic companion that describes to you the details of every location you visit.

I participated in one of these tours a few summers ago, and was surprisingly pleased. The fields were beautiful, with brilliant yellow and purple flowers that grew together to carpet the landscape. I was equipped with a headset featuring a prerecorded tape, but the absolutely brilliant part was that as I was riding my horse on the paths and through the fields, the narrator on the tape was telling me exactly what had happened at my location in 1843.

It was a wonderful experience, both for the history and for the landscape. Gettysburg is just one of those places that has withstood the trials of time and has remained beautiful throughout all these years. 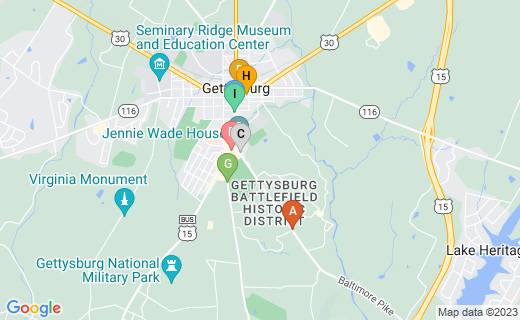 The Jennie Wade House- a must see for the ghost hunter.

The bustling hub of Gettysburg's most popular tours.

The home of attorney David Wills, and the place in which Abraham Lincoln finished his Gettysburg Address.

The location of the Gettysburg Museum of History.

The site of Lincoln's Lost Treasure, an interactive and scavenger-hunt based mystery- starring YOU.

The International Museum of Spiritual Investigations, rumored by fellow tourists to be very "spooky."