I Finally Made It To Hiroshima

Hiroshima. The first thing that usually comes to mind when people hear that, is the atomic bomb. With the Peace Memorial Park being one of the most prominent features of the city, it's impossible to ignore Hiroshima's wartime past. But Hiroshima is more than that. It's a modern city with just over 2 million people living inside the metropolitan area.

Visiting Hiroshima has always been on my list of must-see places. And since I've been living in Japan for over 20 years now, it's a wonder as to why I waited so long. For a weekend trip, I usually find myself going to Osaka or Kyoto, which is just a 3-hour bullet train ride away. Further out, I've been to Hokkaido in the north and even made it to the beautiful Okinawan islands to the south. However Hiroshima lies somewhere between these places-too far to go for a quick weekend and not far enough to go by plane. This past winter, I finally decided to drop some money on a ticket and hopped on a plane for my 90-minute flight to Hiroshima.

*Photos taken by myself unless otherwise noted.

So Please Tell Me...

Have you visited Hiroshima before?

I Freeze to Death in Hiroshima

Ok, I am over exaggerating but I swear, it was freezing when I arrived. My flight took off at 7 AM and arrived 90 minutes later at Hiroshima airport. Upon arriving, I was surprised to see that it was snowing. As I stood outside of the terminal, trying to figure out how to get into the city, I started to shiver from the freezing temperature, forcing me to get my thermal gloves out. Once I figured things out, I was on the bus headed into Hiroshima city.

Hiroshima is a modern city with extremely friendly people, an ancient castle smack in the center of the city and distinctive hearty cuisine. I had my hotel room booked for two nights so I knew I could take things at my own pace. Still, I wanted to visit nearby Miyajima as well as Iwakuni, which has one of the most beautiful and picturesque bridges in Japan.

My hotel was located conveniently in the city right next to the train and bus stations, making for easy access to the places I wanted to visit. The best thing about my room was the view of the castle with the mountains surrounding most of the city. Although it looked cold just looking outside my window, I couldn't wait to explore every nook and cranny of the city. Also on the itinerary today was the Peace Memorial Museum and the A-bomb Dome, which is a designated UNESCO world heritage site.

*Photo : View from the bridge looking towards the Peace Memorial Site 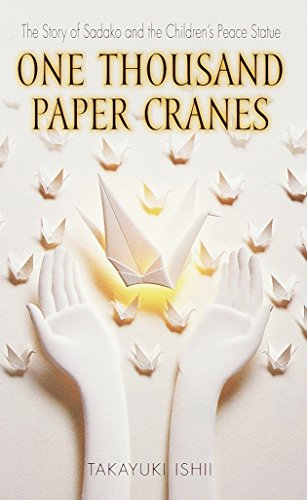 One Thousand Paper Cranes: The Story of Sadako and the Children's Peace Statue
This true story about Sadako, a young 12-year-old girl affected by the radiation from the atomic bomb, is heart-wrenching, beautiful and inspiring. Never to give up, she decides to fold 1000 cranes , hoping that if she succeeds, her wish would be granted. A powerful and inspirational story that will stay with you long after you finish the book.
Buy Now

After a light lunch of a soul-satisfying bowl of hot noodles, I walked a half-dozen blocks to the Peace Memorial Park. As I crossed the bridge over to the site, I was stunned at the silent beauty of the place. It's hard to miss the A-Bomb Dome, also known as the Hiroshima Peace Memorial. When the bomb exploded, this was one of the buildings to remain standing. It is now designated a UNESCO World Heritage Site.

While visiting the main facility which is the Peace Memorial Museum, I was hurled into a whirlwind of emotions. The museum surveys the history of Hiroshima and the nuclear bomb which hit the city. The main focus of this museum is on the events that occurred on that day and the effects it had on human suffering. Going through the museum, it was hard not to shed a tear and there were a few times that I almost burst into full-blown crying and had to sit down a few times. In the end, I was happy that I got to see this place. And despite the somber exhibits of the museum, the message was of hope. A hope for everlasting peace and a reminder that peace should never be taken for granted. At the end of my visit I didn't feel sad as I had expected. Instead I felt uplifted, hopeful and wanting to believe in the goodness of humanity.

My second day called for taking an hour train ride outside the city and taking a short boat ride to the island of Miyajima. Out of all the shrines in Japan, this was the one I wanted to visit the most. Up until this day, I've only seen the it on postcards, books and TV and I was extremely excited about seeing the place with my own eyes.

Itsukushima Shrine is located and built over water as well as the symbolic torii gate. It's an incredibly beautiful island with quaint streets and bustling shops as well as other temples, many wild deer and virgin forest. Many people stay overnight but I could only spare a day and decided to make the most of my short time.

The Kintai-kyo Bridge in Iwakuni

The final day of my trip consisted of a visit to the small city of Iwakuni, which is about an hour away by bus. The rest of the day was spent shopping for souvenirs, checking out of the hotel and heading to the airport for my trip back home. I had a fairly busy day planned, so I made sure I woke up before 7 AM and finished eating breakfast by 8 AM before boarding the bus to my destination.

Iwakuni is a small city with a population of 150,000 people and is located in Yamaguchi Prefecture, just outside of Hiroshima. The city is best known for the structurally unique Kintai-kyo Bridge. Completely made of wood and without the use of a single nail, the bridge makes five arches onto huge stone pillars that cross the Nishiki River. Kintai-kyo Bridge is considered to be Japan's most elegant wooden bridge.

In olden times, the city of Iwakuni was one of the feudal domains of Japan with a castle overlooking the city from the mountain top. The castle was reconstructed in the 1960s and can be visited together with the bridge.

Food is another reason to visit this part of the country. Hiroshima is known for a handful of local delicacies, but two that were on my list to try were the Hiroshima Style Okonomiyaki and Oysters.

Although okonomiyaki is found in other parts of the country such as Osaka, it is made completely different here. Okonomiyaki is usually made by mixing various ingredients into a flour-based batter but in Hiroshima, each ingredient is cooked separately, finally layering everything on top of each other before serving.

Hiroshima also accounts for about 60-70% of Japan's oyster production and they are especially plump and delicious in this part of the country. In fact I never really cared much for oysters until I had some on this trip. I loved the oysters so much that I had a whole plate of them on both nights of my stay!

Okonomiyaki and Oysters Oh My!

Okonomiyaki: Japanese Comfort Food
One of the most popular food in Japan, okonomiyaki is true comfort food. Learn how to make this delicious dish at home in all its different forms-Osaka, Tokyo and Hiroshima style. He even includes some new-style fusion okonomiyaki recipes which taste as good as they sound.
Buy Now

Hiroshima, I'll Be Back

So after two nights and three days of exploring Hiroshima and its environs, I feel content-happy that I made it here. I finally get to cross one more thing off my bucket list. But the funny thing is that now I am itching to go back to Hiroshima again, perhaps staying just a bit longer next time so that I can see things at a slower pace.

Next time, I want to visit the places I didn't have time for. I completely forgot about checking out the castle just outside my hotel. But what I most want to do is this. I want to go to that small island called Miyajima one more time and this time, I'll stay overnight. I'll sleep to the sounds of the waves crashing against the shores of this strange and mysterious island. Then I'll wake up to the sight of the virgin forest in the background and perhaps taking an early morning walk with only the occasional wild deer crossing my path.

What Did You Think?

Click on any of the links below to learn more about each place.

I really hope you enjoyed reading about my Hiroshima trip. Please feel free to leave your comments here. They are always appreciated.

Thank you so much for visiting!