As a former dog trainer, I am a firm believer in the correct use of electronic collars. Currently I have two male Great Danes. We live in the suburbs, where there's a leash law. My boys live in our home, but, of course, they have to go outside for bathroom breaks. They also need to romp outdoors for fun and for exercise, as I am no longer able to walk them on a daily basis.

Overall, my Danes have been easy to train. They learned at a very early age to respect the house and to "go" only in the yard. They learned their boundaries quickly. They knew to stay in our yard and not to set foot (or paw) in the street. This worked well for months.

Then one night, my fawn boy decided to go exploring. He ignored my calls and galloped happily away. I was frantic. We live near an interstate highway. What if he was hit by a car? What if he got lost? What if someone stole him? I jumped in the truck and rode around for over an hour looking for him.

I finally found him. He was at the local KFC, which is just off the busy interstate. I guess he wanted a midnight snack. He knew he was in trouble. He hung his head in shame.

A few nights later, my harlequin Dane did the same thing. Just like his "brother," he ignored my pleas and demands to return to our yard. When I found him, he, too, knew he had messed up.

Both dogs were good for a few more weeks. Then they got itchy paws again and decided to go rambling. This had to stop! I decided to invest about $100 in a remote-control Petsafe electronic collar designed especially for big and/or stubborn dogs. It has a warning button that gives the dog a buzz when they misbehave. If the buzzing noise doesn't deter their improper behavior, you can zap them with a shock.

I was concerned about hurting them, so my husband tested it on himself. He said it wasn't terrible at the setting we chose, so we began putting the collar on the dogs every time we let them out. For dog training purposes, you can adjust the power of the shock.

The warning buzz worked great for a while, but finally, their wanderlust got the better of them, and they decided to test us. The fawn got zapped first, and it immediately got his attention. He came to me as fast as he could! Since that first shock, we've never had to zap him again. Never! We've been using the collar for over a year now, and he's never left the yard again. I decided it was a very effective dog training device.

The harlequin is a little more stubborn. He's been zapped maybe three times in the last two years, and none at all in the past six or eight months. Each time we buzzed him, he immediately returned to us dutifully when we called him. The collar made dog training very easy and effective.

The collar has been a life saver for us and for the dogs. Because of it, they have a lot of outside play time off the leash. Every night after dark, the boys get to run and play all over the front yard together - we no longer need the collar for the fawn. During the day, they go out one at a time and sometimes run a couple of laps around the perimeter of the yard. No more wandering, no more frantic searches.

An electronic collar, in the proper hands, can be an extremely effective dog training aid. Because the feedback is instantaneous, the dog understands the association. It should only be worn when you are within sight of the animal, and it should be removed once they're safely inside. Petsafe makes electronic collars for large dogs and for small dogs, and they receiver is waterproof, while the transmitter is water-resistant. Check out the great deals below. Believe me, dog training collars are worth their weight in gold for dog training! 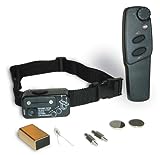 For more about dogs and other pets: