Pictures of Moose on the Loose

Moose on the Loose

This cow and calf spent mornings and evenings feeding along a section of Ranch Creek (Grand County, Colorado) that had slowed and become marshy due to a series of beaver dams. The beaver dams had created a marshy area of the creek along with some deep pools that made for some excellent trout fishing but also provided a haven for other wildlife.

While fishing this section of the creek I never ran into this pair up-close but saw them afterwards as I hiked above the creek along a bluff. Although most Moose avoid humans they can become aggressive when frightened or protecting their young.

I tried to avoid this section of the creek due to the frequent sightings I made of them, preferring to give them a wide berth and avoid them as much as possible. On the bluff above the creek I was able to observe them and take hundreds of photos from a safe distance of at least 2 to 3 hundred yards. Without a doubt they were aware of my presence but tolerated me as long as I kept this distance.

The Shiras Moose (Shiras Alces alces) inhabits the Colorado, Wyoming and Utah area of the lower 48 States in North America. Although the Colorado population of Moose is supposed to be only around 1,000 I wonder if there are more as I saw at least a dozen different animals in the small area I was fishing in Grand County alone.

Every creature is better alive than dead, men and moose and pine trees, and he who understands it aright will rather preserve its life than destroy it.
Henry David Thoreau

A cow moose does not grow antlers and can weigh between 500 and 800 pounds. They generally have one calf or may have twins if food is plentiful, per season with a gestation period of eight months. They are diurnal animals, meaning they sleep at night and forage for food during the day. The young will stay with the mother (cow) until right before the next offspring are born. The life span of your average moose is between fifteen and twenty-five years.

Moose have tough lips, gums and tongue enabling them the ability to eat tough willows and young shoots from trees such as the trembling aspen and white birch. They are strong swimmers and can be found along rivers and lakes eating pondweed and water lilies as well as in the lakes often standing in fairly deep water. 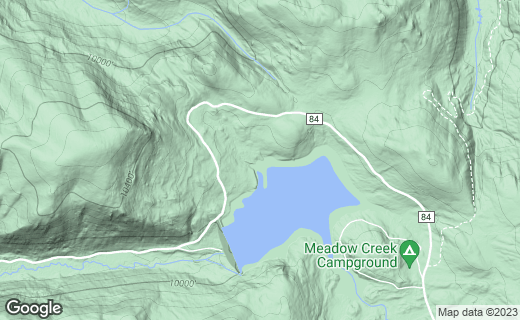 A Bull Moose can weigh anywhere from 800 to 1,500 pounds and stand six and half feet at the shoulder. The male will grow a full set of antlers every year, dropping them at the end of the mating season however immature bulls may retain them through the winter. Initially a layer of skin known as 'velvet' will grow on the antlers as they develop, shedding when the antlers are fully grown.

Although Moose do not gather in herds young bulls may been seen foraging for food together. These males will fight for the right to breed with the cows during the mating season which is in September and October. During this time both sexes call to each other, the males grunting heavily while the cows produce more of a wailing type sound.

While generally moose are not aggressive towards humans, more people are killed from Moose attacks than any other North American animals combined including bears, wolves and mountain lions. This aggressive behavior usually occurs during mating season when hormone levels are higher but can also be caused by the habit of humans feeding the animals and then denying them food.

A full grown moose has few natural enemies besides wolf packs, although bears and mountain lions may attack calves, they rarely attack either a bull of cow moose.

Often a full grown moose will swim between islands in the Pacific north west and have been killed and eaten by Killer Whales however this is rare.

The majority of the moose population in North America is in Alaska and Canada, however the lower 48 states have their share of moose also. The Shiras moose pictured in these photos lives in western states such as Colorado, Wyoming, Idaho, Washington, Oregon and Montana. Paradoxically the Western Moose lives in eastern and central Canada as well as Michigan, Wisconsin, Minnesota and North Dakota.

The largest of the deer family on Earth, the Alaska Moose lives in the western Yukon and Alaska and is estimated to have a population of over 200,000 in Alaska alone.

The moose has been pictured in cave paintings and rock drawings and excavations of stone age hunting sites have revealed moose antlers. Early Native Americans valued moose hides for moccasins as well as their meat which is incredibly rich in flavor much like their close cousin the Elk. The Native Americans of coastal Rhode Island the Algonquian gave the moose its name (moswa) and used its meat as an ingredient in pemmican (dried jerky).

What have you learned so far?

Moose on the Loose

I enjoyed taking moose pictures this summer almost as much as I did the fishing in the high Colorado Rockies. It is good to see that the Moose population of Colorado is returning.

Fishing is a great way to get back to nature and enjoy the great outdoors. Grand County is a beautiful part of Colorado, a little west of the Continental Divide and north of Denver.

Taking Trail Ridge Road through Estes Park over the Continental Divide to Grand Lake the headwaters of the mighty Colorado River, offers the traveller spectacular vistas and scenery. Bring your camera for the scenery and maybe you will get a chance to take a picture of a moose on the loose.

Ever Seen A Moose on the Loose?

Have you ever seen a moose in the wild?