The City of Corpus Christi, Texas was named one of the Best 25 Medium Sized Cities in America for Jobs and Business by a number of financial and employment magazines and analysts.

In addition, a survey in the late 2000s from the North Carolina Center for Creative Retirement revealed that Texas was the second-most-popular retirement city in America, just behind the State of Florida as a whole.

The county seat of Nueces County, Corpus Christi is the anchor of a metropolitan area af approximately 300,000 residents on the southeast coast of the state, encompassing Neuces and San Patrico Counties. On the Gulf of Mexico, the city is just southeast of San Antonio.

Corpus Christi Bay was possibly discovered in the early 1500s by a Spanish explorer around the time of the Catholic Feast Day called Corpus Christi. However, historical records state that the city was named for the early settlers that migrated to the coast during the Civil War. A trading post was established previously, in the 1830s, to that in order to sell supplies to the Mexicans in the area.

The port of Corpus Christi opened in the 1920s and the Corpus Christi Naval Air Station opened in 1941. The port is important not only for transportation, but for its proximity to oil producers in the Bay and Gulf.

Downtown Corpus Christi has been revitalized in the late 20th and early 21st centuries, with a focus on renewable energy and sustainability that is bringing new jobs to the metro area. Corpus Christi has produced increasing port activity since 1970.

The Energy Industry, along with military, and tourism sectors, diversify the economy for more growth. New jobs are being opened, because of the expansion of the Port of Corpus Christi and alternative energy sources, enlargement of the healthcare provider community, and Baby Boomer retirement in this region of the state. 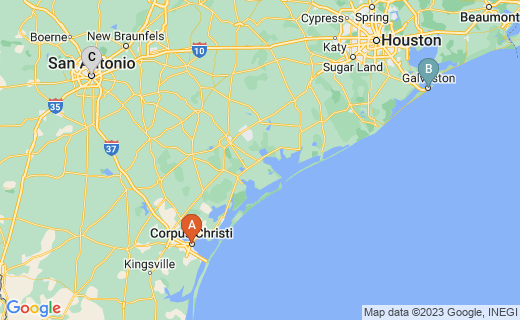 Many of the positions listed above are involved in the Tourism and Hospitality Industry, which is a large part of the local economy. Downtown Corpus Christi offers much outdoor activity at the Bayfront and Seawall, including fishing, surfing, kayaking, windsurfing, swimming, kite-boarding, and an array of others.

Sailing is a major sport in Corpus Christi Bay as well. Several minor league teams in various sports play at the arenas located in the Downtown area and golfing is offered nearby at a number of courses.

Interestingly, cross-border retailing with Mexico has contributed a large revenue share to San Antonio and may include Corpus Christi in the future.

San Antonio merchants put together travel packages for Mexican nationals for airfare, shopping, health care, and recreational activities, so this is part of the Medical/Healthcare Tourism Industry. Corpus Christi is a beach location closer to Mexico than San Antonio and offers similar features.

This second list of jobs contains the same occupational titles as those offering the greatest number of opening in Corps Christi. However, they arranged by the fastest increase in jobs (that is, by largest percentage of exhibited and expected increase in openings).

The largest employers in the Corpus Christi area work in the industries of Construction, Offshore Energy Production, Healthcare, Education, and Government.

Companies in bold print also are among those doing the most hiring.

Companies Doing the Most Hiring

Ingleside, a neighboring city of Corpus Christi, was named as a wind research laboratory and was one of just two such cities in the entire country. This positions the State of Texas as a leader in clean sustainable energy and new jobs.

This museum and education center offers exhibits and presentations about the Asian cultures of China, Japan, India, Sri Lanka, Hmong, Thailand, Philippines, Korea, Taiwan, Laos, and Myanmer. The museum keeps a collection of the largest nuber of items to leave Japn in the 1950s.

Corpus Christ is also home to a Museum of Science and History, The Naval Ship U,.S.S. Lexington Museum, the State Acquarium, and several art centers.

Some cities have artistic renditions of ears of corn all over their sidewalks, come have cows and some have pigs. Corpus Christi has hosted "Dances with Dolphins" - a series of dolphin sculptures all through the town.

Nearby Schools in San Antonio, Northwest of Corpus Christi