For an introduction to El Paso employment possibilities, see:

The article is an examination of data that I gathered from recent and historical public records at job search engines, universities, employers, and government entities that is overwhelming in its potential to lead to an employment boom through 2016 and forward.

This expansion is added to the already increasing numbers of new jobs that emerged in El Paso County (1st & 2nd Qtr 2009) before the allocated Economic Stimulus Funding of 2009 for Employment &Training and work-creating projects was touched. The Texas Department of Labor already had plans for $1Billion in El Paso highway infrastructure projects starting in 2007 to extend to 2010 in order to handle the expansion of US Army Fort Bliss projects and traffic influx, and of the first new US medical school facility to be built since circa 1972 - in El Paso.

Because partnerships among 1) Research Universities, 2) Local and State Businesses, and 3) Government keeps the economy healthy in college towns during a recession and long after, these partnerships are deserving of larger showcasing. 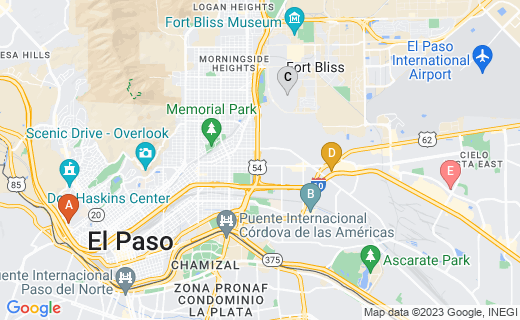 Ring a Boom - Playing El Paso and the Nation

Cuidad Juarez, Chihuahua and El Paso, Texas are somewhat interdependent, workers communting back and forth across the Rio Grande and Mexican children and youth crossing the river to attend school in El Paso daily.

El Paso del Rio Norte ("The Pass" that crosses the river of the north) sits at the far western corner that points Texas into New Mexico and Mexico. The Rio Bravo flows there and separates USA from Mexico (this is the Big River or Rio Grande – even Rio Grand as some Americans spell it).

El Paso's sister across the river is Ciudad Juárez, Chihuahua state; formerly called El Paso del Norte (Northern Pass or 'the pass of the north''). It was formerly part of New Mexico, but was awarded to the the nation of Mexico in 1824.

(On 01/01/2008, Cuidad Juarez contained 1,563, 973 residents, over twice El Paso's citizenry. Although having many cultural features and festivals, it has suffered widespread homicide of women, and job losses, 2000 - 2003. However, the local government improved education and public health promotion 2007-onward to combat disease and crime; and DNA evidence came to the fore in Cuidad Juarez crime investigation.)

El Paso is over 400 years old in the 2000s, with several titles. It was one of the first New World settlements of the Spanish, for instance, with mission building among the first in North America. El Paso is the probable New World site of the first non-native Thanksgiving - a Catholic Mass during Spring, 1598. These events were preceded only by those of Indigenous Peoples, circa 6,000 - 10,000 BC. El Paso finally incorporated in 1873 after the American Civil War and Mexican conflicts.

El Paso was the "Dirtiest City in Texas", but no more, because in the late 1960s, the government began monitoring and reducing pollution.

From 1990s - 2000s El Paso citizens have worked with LEOs (local elected officials) to control emissions and to green the environment. The partnershop reduced 1) ground-level ozone, 2) carbon monoxide, and 3) particulate matter (PM10). Now, El Paso is First City in Texas to Control Three Pollutants at once. The next goal 2009-forward: become the Cleanest city in Texas. In fact, according the state government, no CO or ozone standard violations have occurred since 2001 and PM10 is improving.

El Paso Clean Up Campaign Through - 2020

Texas Gov. Rick Perry announced in March 2009 a $50 Million Texas Emerging Technology Fund (ETF) award create in Texas the first National Center for Therapeutics Manufacturing (NCTM). It is a global center for R & D of medications for diseases such as cancer, diabetes, and influenza. It will stand as a model for future facilities across the USA to combat bio-terror and germ warfare.

UTEP is one of the most innovative educational facilities and systems that I have encountered. Look for a job boomto occur in El Paso as a result of the work of the UTEP Miners at University of Texas at El Paso. Over eighty thousand successful graduates of UTEP attest to the high quality education they received that has sparked economies in their hometowns. This features NASA Astronaut Danny Olivas. His childhood plans were fulfilled as he flew to the International Space Station on board Shuttle Atlantis in the early summer of 2007.

UTEP reports its Contributions as of 2006 to El Paso Economy:

The school is the first Doctoral-Research intensive school of a student body mostly Mexican and Mexican-American. Right on the USA-Mexico border, the school perform research needed by Southwest USA, Mexican, and US National government and culture. This includes Education, Healthcare, Environment, and US Homeland Security. Further, this includes Biotechologies and Health Informatics that will aide in computerizing all USA medical records and the National DNA Database.

EARLY PARTNERS: UTEP since 1914 (Texas State School of Mines and Metallurgy, hence “UTEP Miners”) near Fort Bliss. The gigantic army compound operates to the northeast and east of the university, but portions extend up into New Mexico/White Sands. From around this point, the Franklin Mountains come down through El Paso and split the city in two, but for the exception that Downtown joins the two segments in the south.

UTEP and Fort Bliss, called "The Post" in 1854, are able to partner for economic growth in this interesting area on the national border. El Paso expanded via the Fort's expansion several times in the 20th Century and already inteh 21st. Copper, oil, and the garment Industry flourished, but 1000s of Mexicans began to take the garment jobs, NAFTA sent other jobs south and the economic declined until Fort Bliss expanded again.

FORT BLISS: The Mexican Revolution in 1910 caused Ciudad Juárez to be innundated with especially intense battle. El Paso civilians were also killed and it may have been a hideaway for exiled Mexican leaders such as Pancho Villa. General John Pershing took command of the US Calvary at Fort Bliss and went on to command in World War I elsewhere. El Paso had its ahre of celebrity.

In the 1920s - 1930s and The Great Depression, many popular businesses established themselves. Conrad Hilton built a high-rise at the current Downtown Plaza Hotel, with the Plaza Theatre going up in 1937. Commercial air travel arrived during the Depression, with Varney Speed Lines, renamed to Continental Airlines -- all just in time to transport spectators and teams to the first Sun Bowl college football contest in 1936 -- the Plaza Hotel was filled.

FORT BLISS: Wernher von Braun and his German scientists moved and expanded the V2 rocket program from teh Nazis to the US to make America the leader in the industry. Homer Hickam (Rocket Boys and October Sky) and others joined NASA and continued rocketry and space programs. Von Braun stated many times that he just wanted to get into space, no matter which country was his home. A V2 is still housed for viewing at Ft Bliss.

FINAL BORDER SKIRMISH: USA gave the Chamizal sector of El Paso to Mexico in 1963 to settle a border dispute. The Rio Grande was re-directed and an island mid-river became a viable development property. Twin commemorative parks are maintained on either side of the Rio Bravo.

FORT BLISS: El Paso economy was hurt by low-wage workers up from Mexico and North American Free Trade Agreement (NAFTA) serving to send jobs away; however, Fort Bliss expanded, with additional increases planned for the 2010s. UTEP helps in the development of the Biotechnologies and Health Informatics involved.

Downtown Revitalization surged in the 2000s, including a new freeway system. Along with other projects to create jobs, the 2009 Stimulus increases infrastructure projects to handle the increased traffic 1) to Fort Bliss and 2) from Cuidad Juarez.

for some specific jobs and links, see