Utica and Rome are the anchor cities of the Utica-Rome Metropolitan Statistical Area in New York State. Together, they comprise an area recognized in 2007-8 by Money Magazine as one of the Best 25 Small Cities for Jobs and Business in America.

This metro areas covers Oneida and Herkimer counties and is located in the Mohawk Valley of Central New York. In fact, the Mohawk Nation is one of the Indigenous nations of the area, despite the fact that most have migrated across the state line to the Canadian side of the reservation that lies on the northern border. The Mohawk was one of the nations making up the Iroquois Confederation, which was the first democratically ruled people in the New World, long before Europeans and Norsemen explored the grounds of North America.

Settled by Europeans by the early 1770s and founded with a military fort, Fort Schuyler, Utica was abandoned after The French and Indian War and destroyed in the American Revolution by the British and local Native Americans. It was fortunately rebuilt as a new manufacturing and retail trade center that grew after the Revolution through the years of the Civil War, but F.W. Woolworth opened its first store in Utica in 1878 and kept it for only one year.

As additional ethnic groups, including the Welsh, migrated into Utica and Rome, Textiles and the Tool & Die Industry prospered for some time. These industries moved south to be replaced by such companies as General Electric and its radios and appliances, Lockheed/Lockheed Martin, and other production businesses.

Economic decline in the 20th century was attacked with Urban Renewal development and the Empire Zone plans, all of which created new jobs and propelled Uitca-Rome onto the list of 25 Best Small Cities.

Utica was awarded an economic development Empire Zone, similar to that of Newburgh NY, in order to to offer new and expanding businesses such benefits: utility/phone discounts, wage tax credits, sales tax exemptions, business tax credits, and others. Utica has gone on to construct business, industrial, and high-tech parks to create new jobs.

The Department of Urban and Economic Development guide qualified citizens and business leaders to take advantage of Empire Zone benefits, including low financing rates. The metro area is now a historic landmark hub where preservation is putting people to work, as well as a center for the arts. 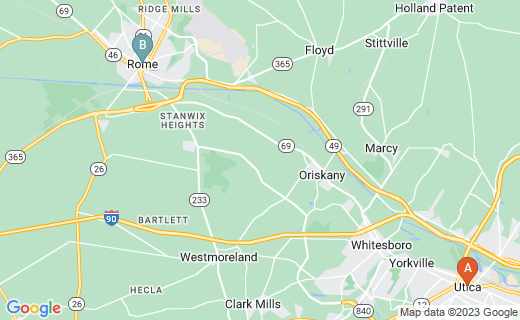 Utica is the home to a number of odd inventions.

One of these inventions is the Utica Crib, a coffin-like box with a grate on top that was used for confining mental health patients in days gone by throughout the 19th century. It looks a little like the Iron Maiden torture device.

At the New York State Lunatic Asylum in Utica (later, the Utica State Psychiatric Hospital), when patients did not stay in bed, they were enclosed in (perhaps even locked into) these covered crib-cages where they could not escape.

The Union Suit is a warm suit of full-body underwear, originally red but in multi colors today. It is often worn by farmers, hunters, ice fishermen, truck drivers, and others during long winters in New York and New England. The seat of the garment contains a convenient flap door secured by buttons.

It may not have been invented in Utica, but Tomato Pie is a favorite in the area, served in squares like Sicilian pizza and often served cold. Hot or cold, it's still delicious.

The Half Moon Cookie is a cake-like cookie with chocolate and vanilla frosting by halves. Local residents tell me that the Black and White Cookie made here is harder and more cookie-like than the Half Moon. Thus, you can have either choice.

These buns are donuts covered heavily in powdered sugar, but with huge jelly centers. They are not just the ordinary jelly donut.

Look at some jelly bun madness below:

Mainstream Teachers are also needed in area Elementary, Middle and High School classrooms; along with Retail Salespersons and Retail Supervisors. in all the retail establishments that are growing economically.

Local Hospitals for Training and Careers

Colleges and universities that provide training for high demand jobs