Cities awarded a slot on the Top 30 List are able to create and offer a greater number of jobs than some other cities, because their planners successfully implement ongoing economic development that draws new and expanding businesses as well as additional residents into their cities.

Growth in the Historic Downtown District

Historic Downtown Idaho Falls is the city's urban revitalization center with official planned economic development in energy and science projects and events like Alive After Five, Fourth of July Fireworks, the Farmer's Market, and a growing list of business attractors.

Downtown residences are increasing in number, with new living spaces constantly planned in condominiums and residential hotels. At the same time, historic buildings are being refurbished and added to the list of US National Historic Sites.

Altogether, business and jobs have been increasing since 2009.

The Goshen North Wind Farm is located 10 miles east of the city of Idaho Falls in Bonneville County.

Idaho Falls serves as a regional hub for healthcare, travel, and business.

Consistently among the Top 30 Cities for Jobs in America, as awarded by CareerBuilder.com, Idaho Falls is located in the Bonneville and Jefferson county metropolitan statistical area.

The city follows along the Idaho river belt formed by Snake River, which flows through the city center. During the AD 1800s early settlement, the falls was taken over by a sharp man named Taylor, who built a toll to span it.

Mormon settlers and trappers, traders,and gold miners provided business trade and a large LDS Temple. The town that grew up here was named Taylor's Bridge, and then Taylor's Crossing before receiving the name Idaho Falls.

The city maintains the area surrounding the river via city budget allocations, donations, and grants. Ongoing development and expansion adds additional green-way areas, residences, and businesses to the river belt area to boost the economy. Such local and tourist attractions include a footbridge over the falls at the location formerly known as Taylor’s Crossing, new parks, and a new baseball diamond.

Amenities are growing with the developing city. 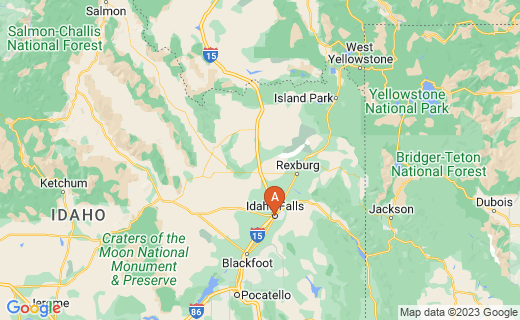 Family Nuclear Science Night, sponsored by the Idaho National Laboratory, engages local families in the understanding and promotion of developing science and science based businesses. Many youngsters later choose to participate in science careers.

Idaho is the fastest growing state in the nation for information technology jobs, according to a new report from a company called VPNOverview.

Note: During September 2021, 700 IT positions were advertised at Indeed.com.

Eastern Idaho Technical College continues to expand its campus and academic offerings, as well as partnering with government and local businesses to develop new jobs. Originally a vocational and technical school, it is called "The College of Eastern Idaho."

Economic growth partnerships further include University Place, offering a dual enrollment option that permits students to attend the University of Idaho and Idaho State University simultaneously, at no extra cost.

The Center for Advanced Energy Studies partners with the schools above, as well as the Idaho National Laboratory and local businesses.

Jobs are growing through school partnerships.