Success: Stimulus Funds Distributed and Used From 2009 - 2014 For New Jobs

Lansing is the Capital of Michigan, located in Ingham County. Approximately 115,000 people live in the City of Lansing, while the Greater Metro Area is made up of Lansing and East Lansing.

At least 12,000 job openings were listed across all Internet sources for Lansing/East Lansing by October 1, 2013.

The Lansing Regional Chamber of Commerce used its Stimulus Package allocation in the following areas in order to establish new, permanent jobs in the Lansing-East Lansing metro area, Ingham County, and parts of Clinton County.

INFRASTRUCTURE SPECIAL: Grand River Avenue, the major street through East Lansing, is targeted for revitalization with new buildings and businesses beginning in 2009. The original roads along this street were established in 1850, before the Civil War. However, in 1995, major reconstruction occurred in East Lansing particularly, because the street was in such poor condition.

Construction workers in the road work gang found ancient rotting logs that were buried two feet below the asphalt. These had been used for the foundation of the original 1850s plank road (made of planks of wood) laid over swamplands. In 2009, reconstruction began to uplift the street and urban residential/business area again to greater economic health.

Some of the buses on the local CATA bus routes are articulated, meaning that they have a joint connecting two cars and the vehicle can bend in the middle. Many bus routes were given extended hours of service beginning in 2009. CATA even provides rural service, curb-to-curb service in certain towns, and special shopping buses to groceries, WalMart, malls, and other retail places for senior citizens.

The bike trail runs from Moores Park on the west by Potter Park Zoo (right downtown) along the Grand River, follows the Red River, and ends at Michigan State University in East Lansing.

If this were not enough, the metro area offers a number of taxi companies and the Michigan Flyer shuttle bus with 8 to 12 trips every day that connect East ansing, Ann Arbor, and the Detroit Metro Airport. This comfortable and efficient servie is offered by Indian Trails, Inc. Indian Trails buses are the most comfortable buses I have ever ridden and they offer Wi-Fi and electric outlets for phone charging or whatever you may need as well.

Another convenience is that the Flyer no longer requires paper boarding passes - just your ticket number from your Internet purchase. Moreover, there is a parking lot for your car and today, the price is $2.00 per day parking fee. How great is that?

The company celebrated its 100th Anniversary in business in 2010. 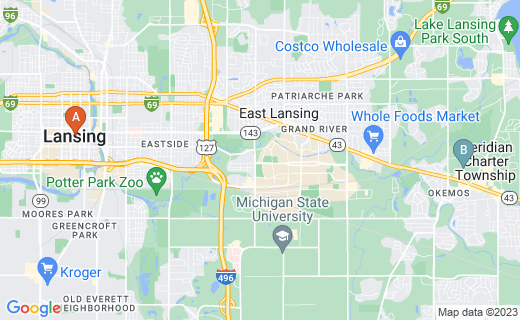 Local and federal government databases provide employment information that can be examined in order to find the best bets for employment in a given metropolitan region or state, by Industry and Job Title.

Some state directories are more well coordinated and user friendly than other, while some provide only long Excel spreadsheets that take coniderable time to sort. Since many of these have no "sort" feature in them, because they are saved as PDF files, then hand sorting is necessary. As with the case of Lansing, many of these databases have a top 10 or 20 jobs that stand out as leaders in creating new openings.

Lansing area industries that are forecast to improve in both income producing results and employment through new job openings include the following:

Transportation - Better All the Time

During autumn of 2013, the following job titles were highest in demand:

Additional higher growth jobs are to be found in:

The Most Complete Career and Job Search Site for Michigan

More About Lansing and Michigan

The Michigan Works! program is active and successful in Lansing, helping 200s of people find successful careers or the education and training that leads to gainful full-time employment.

Lansing is 150 years old in 2009 and has established it's Go Green initiative as a major force in the city. With the addition of 2009 Stimulus Package dollars from the federal government, Lansing and East Lansing are set to expand this drive into an engine for creating the ongoing emergence of new jobs that are green and sustainable for the 21st Century.

Native Americans cared for the region of Lansing-East Lansing until 1835, when white settlers came in the form of two brothers exploring the land. They were con men that sold plots of swampland to New Yorkers back east. The new landowners were not happy. However, they stayed and named the new town after their township back in New York. By 1850, they had begun to lay down timbers to supper plank roads over the swampy ground. There was plenty of work to go around.

Farming was joined by manufacturing in 1897 with Olds Motor Vehicle Company owned by Mr. R.E. Olds (Oldsmobile). Lansing was finally incorporated in 1859, to celebrate 150 years in 2009 by Going Green for sustainability and new jobs,

The Big Ten Conference is fortunate to include Michigan State University (MSU, founded 1855) in soon to be revitalized East Lansing, Michigan,

The school sits on the bank of the longest river in the state: Red Cedar River,where Native Americans fished and hunted. The Agricultural Colelge of the school is the oldest land grant school and agri-teaching authority in the nation. MSU also absorbed the original Michigan Female College from the earlier 1850s.

MSU is an academic and research oriented instuitution, benefiting from federal, state, and foundation grants. Degrees are available in any of at least 200 fields. The schooll even offers three different medical schools.