I have the opportunity to work with a lot of people in my line of work. I do my best to make someone else's life better and successful. I work with people that have a disability, or many disabilities.

If you ask me, any disability is very difficult to have and cope with. So, I have a lot of respect for anyone that has a disability and pushes through it and still becomes a successful person. My clients never cease to teach me about life.

BE The Change You Want to See in The World 077 Vinyl Wall Qoutes Inspirational sa.
Buy Now

I have had the experience to work with a really awesome individual. I'd like to share with you his story in hopes that it will give you hope in your endeavors. He has been through a lot in life, as have we all. Short inspirational stories can inspire us, and I hope that this short inspirational story of my good friend will help inspire you as well. He taught me many lessons, and I feel like he can teach you many lessons as well. Life isn't easy, but we can succeed!

John has a love for something many of us also love: sports. He loves watching games, he loves going to games, he loves participating in games, and he loves anything and everything about sports. Since sports are John's passion in life, he wanted to work in an area where the theme of sports is prevalent and acknowledged.

While living in California John did a lot of volunteer work at two High Schools. He volunteered for 10 years doing what he loves. John was the Equipment Manager of the football, baseball, and basketball teams. He was so involved and loved it. John was helping other people by doing what he loved.

When John moved to Utah with his mother he got involved in the Vocational Rehabilitation program. John went through all the steps in order to receive an Employment Specialist. He was lucky enough to get referred to work with the program at RISE. John was beyond excited to start looking for work in the area he was most passionate about. He and his Specialist were hoping to find him a similar position at one of the local colleges in the area, but they had no luck being that those positions are voluntary positions. They continued to explore options and didn’t give up on achieving a great job in John's desired area.

There were hard times and times when John and his Specialist thought they had hit a final roadblock. However, John remained positive and kept his Specialist on his toes. They decided they would look for jobs at a place that had a lot of sports related things. One of the places they decided to investigate was the local Recreation Center. The Recreation Center they started looking into is full of sports related things and it is a place John would go every week to swim with his RAW group. He loved the Recreation Center. The two rock walls, two slides, exercise equipment, racquetball courts, swimming pools, table tennis tables, pool tables, track, and the plethora of basketball courts aided in his acquired love for the Recreation Center.

With this in mind they set out together searching for jobs at the Recreation Center. It wasn’t long until they found a Night Porter position offered at the Recreation Center. John and the Specialist wasted no time in applying for the position. Before either could blink an eye John was contacted for an interview and was extremely nervous. He had only done one interview in his life only a couple of weeks before this one and he was very concerned about his ability to perform well. He and his Specialist reviewed interviewing again in preparation for his important interview. John was nervous, but nailed every question. Not only was he well qualified for the job, but also he was able to very effectively relate his past work experience in a positive way that landed him the job. He did everything they had talked about and it paid off. 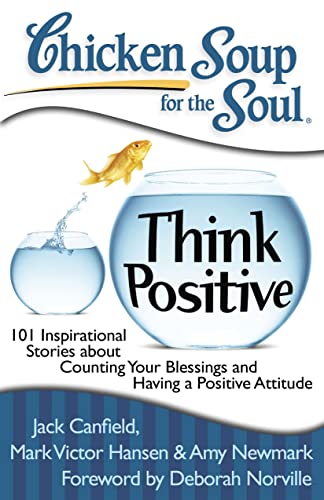 Chicken Soup for the Soul: Think Positive: 101 Inspirational Stories about Counting Your Blessings and Having a Positive Attitude
Buy Now

John works 3 nights a week for a grand total of 17-18 hours a week. John loves his job. Yes, sometimes he has to clean up nasty messes, but he does it with a smile and with an eagerness that his co-workers have noticed and love. Not only has John learned a lot from work, his mother has noticed that he has learned a lot about life since starting to work with his Specialist at RISE and at the Recreation Center. John is more confident in everything he does and now knows he can, and will, be successful.

This proved itself 10 fold when John was announced as employee of the month! He was awarded the honor for his second month of employment. His manager told his Specialist that at least 3 guests had emailed in and specifically said that John was doing a really great job and was working really hard.