Parker, Colorado and Other Suburbs of the Gold Rush

The Pike's Peak Gold Rush, later called the Colorado Gold Rush, occurred from 1858 - 1861 give or take a year or two. It brought many 10s of thousands of people to the Central Colorado area just south of Denver in search of fortunes in gold.

So many people immigrated to the lands south of Denver, that small unincorporated towns were established south of the Denver-Aurora area in order to handle some of the demand for lodgings, prospecting supplies, food and animal feed, and other goods and services. Farms and livestock ranches sprung up as people stayed on.

The Colorado Gold Rush brought gold seekers especially into area around 12 miles south of the Denver in the late 19th Century and even the early 20th Century as rumors of gold discoveries resurfaced. Highlands Ranch is particularly included in this phenomenon.

South of Denver, Castle Rock and Highlands Ranch lie in a kind of north-south business and residential corridor. Highlands Ranch was an actual stretch of ranch lands and Colorado farms during the Gold Rush and its residents traveled north to purchase supplies and other materials. Thus, agriculture, livestock, and gold prospecting formed the bulk of the local economies through the early 20th Century.

The Mission Viejo Company related to the Mission Viejo, California entity outside Los Angeles, bought Highlands Ranch in 1978 and sought to build a planned community there. Highlands Ranch supported 17,000 residents by 1991 after 13 years, but exploded to around 91,000 people during the 18 years to 2009. The Highlands Ranch Town Center is a major source of the suburb’s economy, covering over 160 acres in business and commercial enterprises.

Successful technology centers result in increases in local are businesses, new jobs, and new residents. The Denver Technological Center or DTC is one of these successful centers that incorporates public and private businesses and commercial concerns in the southeastern sector of the Denver-Aurora metro area, near Parker, Highlands Ranch, and Castle Rock. This center is nearly surrounded by I-25 between I-225 and State Highway 88, making it an easy commute from Parker and Highlands Ranch, and a bit further from Castle Rock to the south.

DTC is the origin site for Cable Television -- United Cablevision, United Artists Cable, and AT&T Broadband all began in this tech center. The center is a group of businesses located on the 105th Meridian of Longitude, where satellite communications are better than anywhere else on Earth.

NORAD infrastructure is located here, as well as important installations for the DIsh Network, Comcast, Direct TV, and others. Transportation around I-25 and I-225 has undergone copnstant upgrades to ensure that the DTC remains maximally productive. 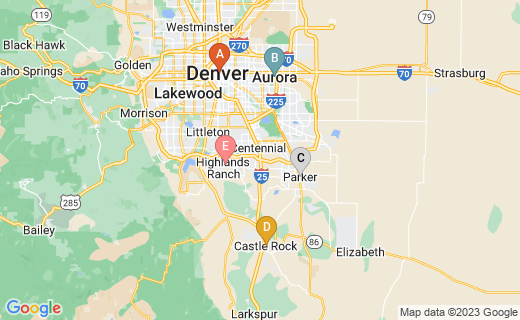 Picke's Peak to the South, Denver to the Near North

Quick growth is also expected in the following job titles, including some of the largest numbers of job openings from 2008 - 2018:

Job listings in this suburban region of Colorado (Unemployment Rate 2% lower than for the USA) increasedfrom 2009 through 2013 within 25 miles of Parker, including Castle Rock and Highland Ranch. Entries below in bold type match official employment projections above (2008 - 2018).

Frequently hiring companies in this area include

Including Castle Rock, north though Highlands Ranch, the following 8 job titles encompass the majority of openings:

The companies that most frequently list job openings in this area include:

Jobs Not In Castle Rock-Highlands Ranch

Job listed from Parker up to Denver-Aurora include the following leaders:

Jobs Within in a 15-Mile Radius of Parker

Parker, Colorado lies to the east of the corridor formed by highways C-85 and I-25 running from Castle Rock north to Highlands Ranch. If you draw a circle with a 15-mile radius around Parker, you find a different mix of jobs available. Some of these openings are a bit to the east or west and south of Parker. A complete Hub about Parker CO and its employment forecasts and job listings appears at: Hot New Jobs Near Pike's Peak.