The original inhabitants of the San Simeon area were Chumash Nation, living here from at least 12,000 BC or before. One particularly large Chumash village was located south of San Simeon and discovered by archeologists.

San Simeon is still an unincorporated “place” according to the US Census, located on the US Pacific Coast in San Luis Obispo County. It sits on California State Route 1 about halfway between the large metro areas of San Francisco and Los Angelesto the north and south on either side.

After the Chumash were entrenched in this area in Middle California, the Spanish explorers that traveled up the territory, ultimately as far as Alaska and British Columbia, though they quickly gave up claims to the northern lands. The Spanish did claim California and San Simeon was founded on part of the former Rancho Piedra Blanca Mexican Land Grant lands. These were provided to one José de Jesús Pico in 1840. Twenty-five years later, in 1865, George Hearst purchased part of the property after the American Civil War. His son, William Randolph Hearst, developed the property into an estate complete with castle.

The natural scenic wonder of the Pacific Coast in the San Simeon Area, along with continual local development and historic preservation of local cultures are part of the package that led readers of StoodThere.com in 2009 to vote San Simeon the 7th Greatest Place to Stand in America. This place is a beautiful spot to take pictures, but there is much more to do and see. 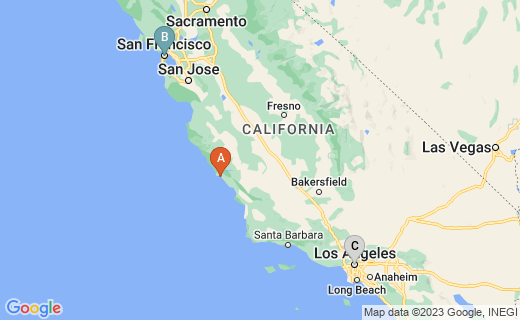 Despite the small population of 443 individuals in US Census2010, San Simeon is home to parks, beaches, campgrounds. wildlife sanctuaries, and other outdoor attractions. It also supports a National Scenic Byway, and legions of native plants and wildlife species in addition to those insects, mammals and others that migrate seasonally.

San Simeon State Park and San Simeon State Beach make up one of the largest state park complexes in the California park system, although in the 2010s, some of the parks are expected to close to the public, under state budget deficits.

Inside the park, we find two nature preserves: Santa Rosa Creek Natural Preserve and San Simeon Natural Preserve. Not only are a variety of birds seen in these preserves, but also the legendary monarchs mentioned below. The preserves and Washington Primitive Campground are home to threatened and endangered species of wildlife that include fish, repitiles, and mammals as well as birds. 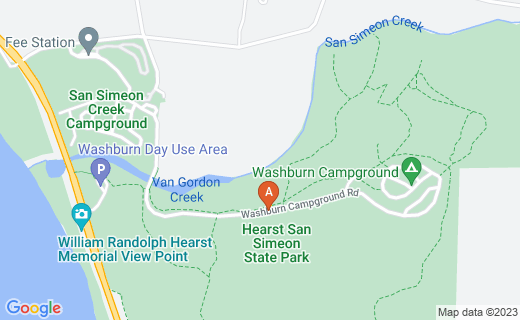 California State Highway 1 through San Simeon is considered legendary and is officially designated as a National Scenic Byway that visitors enjoy driving.

The byway designation begins at the southern end of Big Sur, offering drivers and passengers scenic magic in the coastal landscapes it passes all th eway to Carle in the south. The views from Big Sur to Carmel are some of the favorites in all of California on Highway 1. This is reinforced by the development down through the Hearst estate for several miles up and down the shoreline to provide services to visitors.

The Chumash call themselves The People , as many indigenous peoples do. Looking at the Chumash painting style shown below, one can see similarities of Chumash paintings in Australian Aboriginal works. Further, linguistic connections have been found by specialists that connect east and west languages with the hand-sewn plank canoes found both in the Chumash areas of California and Polynesia - thus far the only two places they have been found. This suggests migration across the waters.

Such a link was found also between carved cedar poles in the Queen Charlotte Islands and older carved poles in New Zealand by Maori people. A Maori pole is believed to have washed up in the islands near British Columbia. Linguistic link markers have also been found between an Iroquois language and a Zulu dialect; thus, New World and Old World peoples are more firmly related that previously thought to be, reinforced by the DNA evidence of the huge National Geographic Genographic Project.

Elephant seals are another species of animal to watch in San Simeon, often located in a cove at the lighthouse mentioned below.

Around the time of Thanksgiving Day in 1990, residents and visitors to the area noticed about two dozen elephant seals for the first time. There were few visitors before Highway 1 opened after WWI, so the complete history of the seals in this area is not yet known.

From late 1990 and two dozen individuals, the seal population increased the following spring to 400 elephant seals. Someone spotted a baby in 1992 and the herd has been around ever since. The latest count in the 2000s was 10,000 seals and 4,000 pups.

The swarm of Monarchs is legendary in its annual migration. The insects come from throughout the American West to a range of wintering homes along the California Pacific Coast, including San Simeon. The monarch flies up to 1,000 miles to California. During the winters, the monarchs breed, usually living in eucalyptus trees and eating only flower nectar, and that of milkweed.

This sanctuary in the sea comprises 276 miles of waterfront that reaches from north of San Francisco in Marin to Cambria, which is to the south of San Simeon. Beyond the shoreline, the sanctuary covers over 5,320 square miles of ocean under the supervision of the US National Oceanic and Atmospheric Administration (NOAA).

Recreational activities include sightseeing, fishing, and boating, while research and education are ongoing in the sanctuary in partnerships supported by the Federal Government, higher education, and local businesses.

After the elder Hearst purchased property from Mexico, the US Federal Government furnished a lighthouse at Piedras Blancas in 1974, named after the original Mexican land grant.

The lighthouse and a general store are the only properties not owned by the Hearst family for some distance. The Hearst family owns the California coastline in this area and maintain it in its primitive state. Visitors did not appear until Highway 1 was opened to the public. The beach area is protected but provides safe viewing platforms for visitors.

San Simeon witnesses the annual migration of pods of the Grey Whale from Alaska from December - February as this sea creature travels en masse to breeding waters in Baja California. Breeding lasts for three months and the families swim back to the north during early spring.

The whaling industry was active in San Simeon before the Civil War and for many years. A pot used for gathering whale oil from the hunted whales is on display at the Hearst San Simeon State Historical Momument in the state park Historic harpoons are on display at times in the public Sebastian's general store in San Simeon as well. About two dozen families lived at San Simeon during the height of the whaling industry here, but there were no roads in or out - travel was by boat.

Sea otters are preserved on the San Simeon coast as well, since the otters were hunted by Alaskan Natives and Russians all the way south to San Simeon and almost to extinction when whaling was at its most active.

Newspaper baron William Randolph Hearst developed the land purchased from Mexico by his father and built Spanish-architecture houses for his employees at San Simeon. He developed an estate to the point of constructing a castle and today, the Hearst Castle is part of San Simeon State Park.

In the 2010s, the State of California planned to close a large proportion of state parks, because of a budget deficit, but the San Simeon sites were saved. The Castle has been lent additional publicity since the 1970s and Patty Hearst's escapades with the Symbionese Liberation Army bank hold ups and such. This area of San Simeon has so much to offer that it may be one area the state wishes to keep open.

The National Geographic maintains a film theater within the castle and its screen is 8 times the size of a standard film screen. Interesting films about culture, wildlife and other relevant topics are shown in the castle, with four separatre tours available besides the gardens and art collections. Operating since 1958, the castle is more like a grouping of museums, with the nearby beaches developed to serve their visitors.

Over 3,500 jobs are listed in and around San Simeon in March 2015, double the number available this time in 2011. The most needed workers are:

NOTE: Numbers of jobs are likely to increase in the June/July portion of the calendar for tourism increases, and again in the autumn to accommodate new and returning students that fill the area colleges, universities, and tech schools. Retirees also like this area and require the same goods and services. Lastly, Medical Tourism brings additional traffic to the area short-term, leading to upsurges in jobs.