How hot is a 'red hot chile pepper'?

How hot is a habanero? The Chile Pepper Institute at New Mexico State University measured the capsaicin of the habanero and over 100 other varieties of peppers. You’ll be surprised at the results.

Watching the History channel’s segment of ‘Modern Marvel’s’ I was amazed at what I learned from the segment. Not an avid pepper popper, I was intrigued enough to investigate the institute on my own. Here is what I discovered:

Chile peppers originated from South America in a remote region of Brazil. This location is considered the ‘nuclear area’. These peppers were small and round, similar to a berry. Eaten by birds, the seeds were then carried out of the area into first Central, and then North America.

Birds are unaffected by the heat of the pepper. Since they do not have receptors in their mouths the way mammals do, they can consume the berry without difficulty. The heat of the pepper deterred rodents and other mammals from consuming the peppers thus allowing them to flourish.

There are now over 30 species of chile peppers: five domesticated and twenty-five wild; and hundreds of varieties of these species. They are part of the ‘nightshade’ family, whose members also include tomatoes, potatoes, and eggplant and are high in both Vitamin A and Vitamin C.

Capsaicin creates the heat of a pepper

The placenta, or inner lining of the pepper, holds alkaloids called ‘capsaicinoids’ . It is this colorless chemical, capsaicin that gives the pepper its heat. Since there are over one dozen different alkaloids, there are countless combinations that can be created for flavor and heat.

The ‘fire’ from a chile pepper is caused when the capsaicin touches the tissues of the hands, mouth, and tongue. When eaten, the hydrochloric acid from the stomach used in digestion is released. Some of the acid can leak back into the esophagus causing heartburn. In the meantime, the body reacts by increasing the blood circulation, causing a person’s face to redden and the body to sweat. Taking a histamine-2 blocker prior to the consumption of hot peppers can help to deactivate some of the heat by blocking the signal to release the acid.

Warning: Drinking water does not put out the heat of a hot pepper, and in fact, causes it to increase by spreading the capsaicin. Dairy products are the ‘antidote’ to squelching the fire from a hot pepper. The protein in milk or ice cream binds with the capsaicin and washes it away.

In 1912, scientist Wilbur Scoville devised a way to test the heat index of chile peppers. The measurement is now known as a ‘Scoville Heat Unit’, or SHU. Accordingly, the hotter the pepper, the higher the SHU rating. In later years a more sophisticated testing method was developed. It uses a high pressure liquid chromatography test. The rating for some commonly used chile peppers is as follows:

Know your chile peppers heat index BEFORE you take a bite

The Chile Pepper Institute is devoted to the research, education and propagation of new developments and information regarding chile peppers. Thus far, New Mexico leads the United States in the production of hot chile peppers.

The ongoing research of the CPI has brought new discoveries. Paul Bosland, co-founder and director of the CPI, is being credited for bringing the ‘hottest chile pepper in the world’ out of its home country of India. After years of meticulous testing, the Bhut Jolokia is confirmed as the hottest pepper found to date, with a SHU rating of over one million.

It is reported that in India, the Bhut Jolokia pepper is smeared onto fences and added to smoke bombs to ward off wild elephants.

In 2006 the Guinness Book of World Records listed Paul Bosland as the discoverer of the ‘hottest chile pepper’ in the world. The other Guinness Book record is for the hybrid grown at the CPI’s Teaching and Demonstration Garden at New Mexico State University’s campus. This chile pepper, known as NuMex holds the record for the longest pepper, measuring at 13.5 inches.

Cajohn’s, a retail shop in Ohio that specializes in distributing hot sauces, holds some of the hottest chile products ever produced, including sauces that carry the Bhut Jolokia ingredient. John and Sue Hard, proprietors, donate a portion of their hot sauce sales, Holy Jolokia, to the Chile Pepper Institute to support the valuable ongoing research. It’s fun to explore their website if for no other reason than to read some of the creative names for their sauces. Visit their website at www.cajohns.com

In 2010 Rand McNally’s Best of the Road listed the Chile Pepper Institute as a ‘must see’ destination while in New Mexico.

You can investigate the CPI’s research and activities by going to their website: www.chilepepperinstitute.org CPI also offers an educational page for children and teachers.

Chile Pepper Institute is 'Best of the Road' by Rand McNally 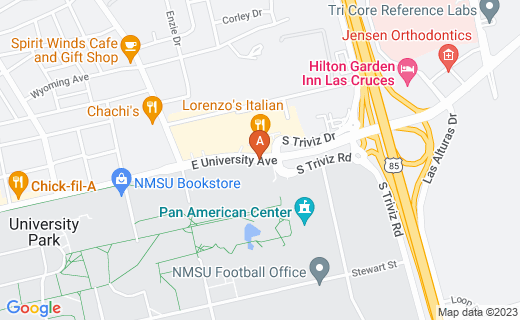