Physics, the Universe and Colonizing Mars

Colonizing Mars is a Reality

In May 2013, I was happy to hear the announcement of the Nebula Award bestowed upon author Kim Stanley Robinson. He had won the award already for Red Mars in 1993. Twenty years later, he won for 2312 that he published in 2012. His novels are likely the best we have currently for describing what life on Mars and farther into the universe will entail.

Robinson is the author of the very detailed, fully researched, and engagingly written Red Mars Trilogy. He found out just how to colonize Mars, bring air and water to the planet's surface, and then speculated on what politico-social dynamics would follow. The trilogy is fully believable and the future will reveal whether the books manifest into real life, as did many of the gadgets and inventions we have drawn from the Star Trek® universe via NASA.

The trio of books is so lifelike in story and data used that it reads like exciting nonfiction. Written in the 1990s, the trilogy is still ahead of its time from 2015 - 2020. NASA's current class of eight astronauts, the separate Mars One and Buzz Aldrin's "Get Your Ass to Mars" campaign plan to be on Mars before 2035 and perhaps as early as 2020. Another mission, privately funded, aims for 2018.

They would all do well to read the Robinson trilogy. It and a few other remarkable books will help them to understand the physics of the universe, the social, psychological, and political implications of exploring it, and how to move forward through it all. 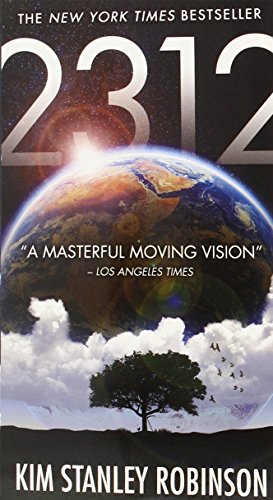 2312
Set 300 years into the future after its release in 2012, this novel largely plays out on Mercury. In 2014 - 2015, it is interesting that NASA and the Commercial Crew was developing habitats for the atmosphere around Venus and Mercury. Robinson's book shows what paths humans might take once off the Earth and this includes longevity, a continuum of genders, new types of AI and several other fascinating concepts.
Buy Now

Is this our universe?

I think that looking at an atom and looking at the universe are like looking through either end of a telescope.

We must understand the universe in order to explore it.

Similarities: The Atom, the Solar System, the Universe, and the Computer World

The farther down into the concepts of science and information I gaze, the more I see the structure of the solar system and the similar structure of atoms of the Periodic Table. Everything is a solar system arrangement in my mind.

I hope these concepts can help humankind settle Mars, overcome the physical and psychological barriers of long-tern outer space life, and continue as far out into the universe as it wants to achieve.

I think that author Charles Seife and his nonfiction book Decoding the Universe affirm my opinion. This book flows well and suits students, science professionals, and science hobbyists. It contains enough complexity to keep readers interested and questioning, without putting them off the work.

If it were psychology instead of physics, I'd say it was somewhere between Psychology Today and the new APA Diagnostic and Statistical Manual of Mental Disorders 5. 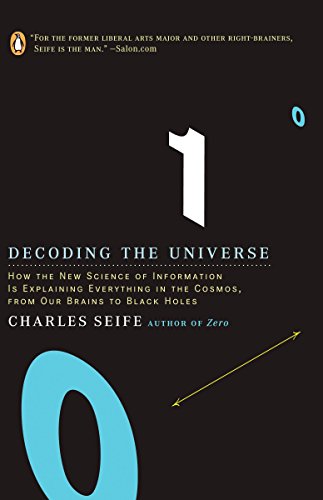 Decoding the Universe: How the New Science of Information Is Explaining Everything in the Cosmos, from Our Brains to Black Holes
Buy Now

Decoding the Universe considers computer information science (CIS) in relation to known physics, from Newton and Einstein through the "everything" theories we have received in the 21st century.

The book provides an easy to follow explanation for the Schrödinger's Cat paradox, the speed of light (which may not be a constant) and other concepts and theories with which students in physics classes have some difficult.

Perhaps the universe is a computer. We think it is probably non-spherical, multi-dimensional, and possibly shaped like a Mobias strip. A set of laws of physics and mathematics govern our universe. Is that true of other universes and/or dimensions? By understanding those laws of our own universe, we might be able to discover others.

NASA scientists at the John Glenn Center in Cleveland, Ohio have been working on breaking the speed of light and teleporting photons for several years. Might these two breakthroughs help us cut the time it takes to fly to Mars (four to seven months)?

Time Saving on the Long Flight to Mars

The Gilbreths in Cheaper by the Dozen were experts at cutting the time of tasks in the workplace and in the home, while maintaining good results. We need that type of input for cutting the time it requires to fly to Mars and the Asteroid Belt just beyond it, if we are to successfully settle Mars and mine those asteroids.

Before the US began using Russia's Soyuz ships to travel to the International Space Station in just six hours, the American space shuttles required several times that amount of time. The answer is to your our Spaceport in Alaska, which is at approximately the same latitude at the Soyuz launch site. The higher latitude cuts the time significantly. The Mars question is not so simple to answer., but the physics is there and the fiction and nonfiction books exist that can help scientists to discover that answer.

I canna' change the laws of physics.

The author of Decoding the Universe suggests that a it of information or data is physical. This suggests that it has weight and takes up space. Can this help is in space travel?

Another interesting concept discussed in the book is that we know that information bits for the computer universe are expressed as either 0 or 1. Mr. Seife suggests further that DNA sequences are series of these 0's and 1's (no charge and charged; off or on). In 2015, we are hearing about methods for editing DNA in humans and about court suits pending against their use.

If we can combine the information in the "Red Mars Trilogy" with that of "Decoding the Universe", we may be able to cut the time required to travel to Mars, the Asteroid Belt beyond it, and outward. We may also be able to solve some of the serious challenges of settling communities on the Moon and Mars.