Some phenomenon work best in resonance and others best in dissonance

How it relates to Earth, Humanity and Individual Solar System Bodies

Simply defined, the Schuman cavity, or Schuman Resonance (SR) is the resonant relationship of electromagnetic radiation to the diameter/circumference of the earth. It frequency measures at 7.75 cycles per second (CPS) based on the velocity of light. Every single stellar and planetary body has its own unique SR signature that can be used as a marker of identification. Each one can be directly related to specific frequencies with which we are familiar and how they act in a feedback loop with others to create a complex resonant harmonic that characterizes the entire solar system. The SR frequencies measure from the Mhtz that are those of the asteroids to the ultra low of the sun itself.

Does the Schuman Cavity actually exist, or is it a figment of our overactive and fevered imagination. The argument for it's existence is the interaction of electromagnetic radiation with the magnetic fields and even the physical size of various bodies around the sun. We see high energy particles interacting with the earth, Jupiter, Saturn, Uranus and Neptune and these create light. Most of the particles get trapped in the magnetic fields and whizz around the planets at close to the velocity of light, trapped between magnetic field lines, such as we see on the sun. When they impact the atmosphere near the field poles, they glow in the visible part of the spectrum. Some of this filters into the atmosphere and manifests as lightening which can be measured to specific frequencies. Thus lightning is another way we can measure the SR. This constitutes one form of evidence. We know the velocity of light and the size of the earth, so we can calculate the SR. We can also do this with all the other planets, asteroids and even for extra solar bodies provided we have the basic information.

“Because lightning strikes are pulses, they contain many different frequencies and because the Earth is a resonator it takes these harmonic-containing spikes and filters them into multiples of the Earth's resonant frequency. Therefore, frequencies of 7.8Hz, 15.6Hz, 23.4Hz etc. are all supported by the Earth's resonator. Also, locally, signals from lightning strikes that have yet to travel ample distance to allow for the filtering effect can be recorded with many different frequencies intact.” (1)

Recently, there has been a lot of talk about the increase in frequency of the Schuman Resonance to what is stated as 11 CPS. The only things that could cause this is the shrinkage of the earth or an increase in the velocity of light. Neither has been observed and further, the SR that is under constant monitoring as well, is still stuck at 7.75 CPS as it was in the past. The earth is not shrinking. The velocity of light has not changed. So where is this misinformation coming from?

Misinformation comes from sources that like to confuse, mystify and obscure the truth under a mountain of misinformation. They appeal to the types that want to believe that something fantastic is about to transpire. But what of the 11 CPS SR? This may be from an outside source, in particular from a body that is smaller than the earth that someone is picking up on and confusing it with the earth's SR. Let's look at the SR frequencies of the other planets and how these couple with measured human brain frequencies.

29-40 Hz: These frequencies represent bodies between Mars and Earth in size that do not exist but they can arise as harmonics to basic frequencies of the earth itself. 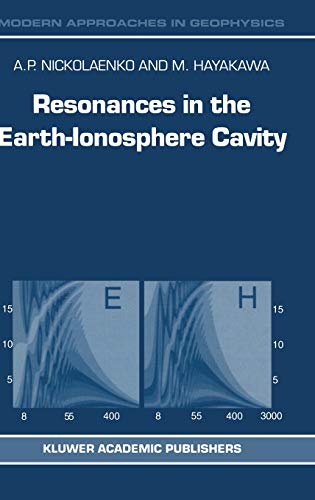 Resonances in the Earth-Ionosphere Cavity (Modern Approaches in Geophysics, 19)
Geo-engineering by using the natural frequencies of the earth to transmit power around the world via the ionosphere or through the earth itself are some of the ideas explored in this work that is based on patents going back several decades.
Buy Now

The closest matches appear to be the diameter resonances of Venus (8) and Mars (12), but there is no match for the 11 SR. Whoever came up with that idea, is either stretching the truth to fit a pet idea or is telling an outright lie. It has no real basis in facts for reasons stated above and below. We will say though that each planet has an interface between its atmosphere and denser parts, which allows for the building of the SR in each case and the harmonics of these. Do these link to the Earth in any way? It is possible as electromagnetic radiation can propagate through space. But, the earth itself contains many harmonics and these would have a much greater and immediate impact. As for some kind of move toward some elevated spiritual state, the evidence for this is yet to come in. Looking at the world at large, there appears, as usual to be a dearth in this department. But then again, different people mean different things when they say spirituality. A few mean caring for the earth and for one another and the majority believe is some fantasy land escapist nonsense of which there are a plethora of ideas. Some of it surfaces via organizations and groups that ought to know better as they proclaim to promulgate and stand for the truth. Some of them are going to have to strive for more objectivity.

“What is a Schumann Resonance? Believe it or not, the Earth behaves like an enormous electric circuit. The atmosphere is actually a weak conductor and if there were no sources of charge, it's existing electric charge would diffuse away in about 10 minutes. There is a 'cavity' defined by the surface of the Earth and the inner edge of the ionosphere 55 kilometers up. At any moment, the total charge residing in this cavity is 500,000 Coulombs. There is a vertical current flow between the ground and the ionosphere of 1 - 3 x 10^-12 Amperes per square meter. The resistance of the atmosphere is 200 Ohms. The voltage potential is 200,000 Volts.

There are about 1000 lightning storms at any given moment worldwide. Each produces 0.5 to 1 Ampere and these collectively account for the measured current flow in the Earth's 'electromagnetic' cavity. The Schumann Resonances are quasi standing wave electromagnetic waves that exist in this cavity. Like waves on a spring, they are not present all the time, but have to be 'excited' to be observed. They are not caused by anything internal to the Earth, its crust or its core. They seem to be related to electrical activity in the atmosphere, particularly during times of intense lightning activity. They occur at several frequencies between 6 and 50 cycles per second; specifically 7.8, 14, 20, 26, 33, 39 and 45 Hertz, with a daily variation of about +/- 0.5 Hertz. ” (1)

This interesting information actually tells us something else; that is, this is a source of enormous energy that we can learn to tap and answer our energy needs in a clean manner. So far, it is going unused as lightning strikes all over the earth as the whole system seeks equilibrium. If we learned how, we could tap into the imbalance and derive useful energy. Nikola Tesla was engaged in some of this research that has by and large been neglected since the early 1940s.