The Scientific Misconception of Life

Part of me is reluctant to write this, because it is like biting the hand that feeds me. Science is my profession, which means I make a living playing the game that I am about to criticize. By day I run a federally-funded lab doing experiments on microscopic marine animals in order to learn how a single cell—the fertilized egg—uses its genetic inheritance to reproduce, through a process of cell division, growth and differentiation, a complex multicellular organism that looks very much like its parents. It is one of the most amazing facts of life, and because of the work that I and my scientific colleagues do, we now have a detailed picture of how it works.

But, with a few exceptions, this picture (and biomedical science in general) is based on, and propagates, a fundamentally misconceived view of life. The misconception is that living systems—cells, organisms, and ecosystems—can be adequately understood as mechanisms. They can’t. Mechanisms (i.e. machines ) are not alive. While it is true that mechanistic determinism explains much that is predictable about anatomy and physiology, mechanisms left to their own devices do not do any of the things that distinguish life from non-life, the quick from the dead. They do not reproduce themselves, and they do not self-organize. Machines are, in essence, dead.

To see this all we need do is consider an animal at the moment of death. What is different? Within the dead body the parts are all the present and more or less in working order. So what is different is not a loss of underlying mechanisms, or even their failure. Broken mechanisms can be fixed. If your car dies chances are that all you need do to get it running again is to repair it. If life were strictly mechanical then Victor Frankenstein’s quest to reanimate a dead body would be a real possibility. But it doesn’t work that way. As far as we know the dead cannot come back to life; everything (and everyone) that is alive today is the continuation of something that has been alive since life began.

And yet biomedical science is obsessed with the metaphor of mechanism. This obsession extends to the point of denigrating phenomenology and rejecting out of hand any non-mechanical explanation. In my field it is not possible to publish a paper that is deemed merely ‘descriptive’, i.e. one that does not elucidate the molecular-cellular-genetic mechanism underlying a given biological phenomenon—at least not in a top-tier scientific journal. And as you have probably heard, the game is one of publish or perish. For biomedical scientists, finding a ‘mechanistic’ explanation is the be-all and end-all of the research enterprise.

But life is clearly not a machine. So why then do most biologists insist on explaining life in terms of mechanisms?

The answer to that is a long story that I won’t tell here. Suffice it to say that it is a metaphysical position that was historically adopted by western philosophers and scientists of the Enlightenment, motivated in part with a desire to unburden thought from religious dogma. It is truly ironic, because the obsession with mechanism is a legacy of Isaac Newton (1643-1727)—a devout (if unorthodox) believer who viewed his work as being a rational exegesis of God’s design. But Newton’s successors used his work to argue that a supernatural being is entirely superfluous in a deterministic universe that is causally closed. According to the great mathematician and scientist Pierre-Simon Laplace (1749-1827), all that is needed to both explain the workings of nature and accurately predict the future (the job of scientists) are the laws of motion and sufficient knowledge of the state of things (basically, positions and momentums) at any given time. When Napoleon asked Laplace about his failure to mention God in his book explaining the universe, Laplace famously answered “I had no need for that hypothesis”. This point of view allowed biologists in the 19th century to reject vitalism, the doctrine that life is motivated by a vital force that is not found in non-living things. The implication was that a sufficient understanding of life requires only (1) the parts list of the system (e.g., for an organism this would be the organs, tissues, cells, and molecules—DNA, RNA, protein, lipid membranes, etc), and (2) knowledge of how the parts are put together to constitute a functional mechanism.

To be fair, this approach to understanding life has worked medical wonders. It is in fact the basis of the drug industry that runs modern medicine. But it doesn’t explain life. It doesn’t even really begin to get at life. As I said, mechanisms aren’t alive. Trying to understand life in terms of molecular mechanisms is like trying to understand a hurricane by mapping the positions and momentums of the air molecules getting sucked into the vortex. That’s not going to tell you what causes a hurricane, or even give you much insight into what a hurricane is all about.

Moreover, it can be argued that, for all the good it has done, over the long-run the mechanistic paradigm of biomedical research (like the industrial revolution in general of which it is but part) has produced an equal if not greater measure of harm. Don’t get me wrong—I am not arguing that we should do away with reductionistic biomedicine—it is a necessary part of the picture. Nor am I an anti-industry Luddite. I like the economic privileges granted by industrialized civilization as much as the next guy. I am only saying that the blinders imposed by our narrow fixation on mechanism cause big problems. The mechanical mindset underpins a way of life that is way out of balance with nature. To see that one need only think of the environmental catastrophes that beset us (remember DDT and Rachel Carson’s Silent Spring?), or follow the news of the latest drug recalls.

Not all biologists are obsessed with mechanism, and some have developed models of life that are more organic. This group includes Charles Darwin (1809-1882), who, while inspired by Newton, paved the way toward a scientific understanding of life based on an evolutionary (i.e. historically contingent rather than mechanically deterministic) explanation that begins to address the question ‘why’ (as opposed to the ‘how’ addressed by mechanistic determinism). But Darwin didn’t go far enough—although he reinvigorated scientific appreciation of the fundamental role played by random chance and history, his theory remains limited in explanatory scope. One of its biggest limitations is that it does not readily explain how life developed from a pre-living organic chemistry, a problem that remains unsolved by science, which unfortunately fuels the fires of creationist “intelligent design” sophistry.

To overcome that mental block science needs a new paradigm that transcends Darwin, much as the work of Einstein and Heisenberg transcended Newton. Fortunately such a paradigm appears to be developing from within the field of complexity research, drawing from the conceptual frameworks of thermodynamics, information theory, hierarchy, category theory, cybernetics (feedback-based causality), ecology, and semiotics (communication through signification). In this formulation the key to life is not its underlying mechanisms, but the relational context (organization) that affords the feedback necessary for emergence of information, coupled to a structural template (e.g. a complex polymer) that can store and reproduce that information, allowing for selection.

Here are some of my favorite books that introduce this promising new way of investigating life: 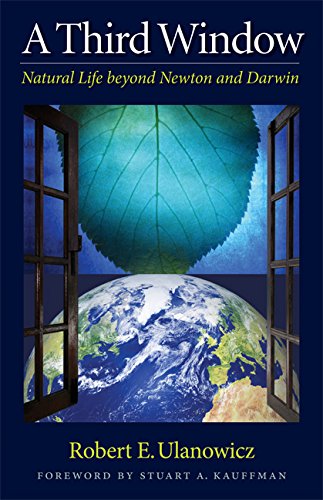 A Third Window: Natural Life beyond Newton and Darwin
Robert Ulanowicz is a theoretical ecologist who uses information theory to model the growth and development of ecosystems. In this book he presents a compelling argument for why the monistic determinism of Newton and Darwin does not suffice to explain the inherent creativity of life. He then develops a case for a new dualistic science of 'process ecology', based on random chance and the selective agency of autocatalytic cycles.
Buy Now