On September 2008 there was a bipartisan summit in America attended by 100 senators. The Senator from Rhode Island, Sheldon Whitehouse gave an impassioned speech part of which went as follows:

Gentlemen, we're in the middle of a near total mortgage system meltdown in this country. We have a health care system that burns 16 percent of our GDP, in which the Medicare liability alone has been estimated at $34 trillion. We're burning $10 billion a month in Iraq.

This administration has run up $7.7 trillion in national debt, by our calculation. And there is worsening evidence every day of global warming, with worsening environmental and national security and economic ramifications. In light of those conditions, do any of you seriously contend that drilling for more oil is the number one issue facing the American people today?

Senator Whitehouse was very correct. It is not oil that the American people should be concerned with, it is water. Here are some water facts:

The facts could go on, but the bottom line is that the water situation is already tight and with continued population expansion the situation can only get worse. It is not oil that future wars will be fought over but water. This is what US Administrators are willfully ignoring.

People around the world from Japan to Saudi Arabia, to the States and from South Africa to Iceland have been conditioned for the last 50 years to be consumers; to gain happiness from consumption. They have been told that cost is simply a market device reflecting a number of economic variables. Nobody in the mainstream until recently has questioned this consumer-value ethos.

This has changed with global warming. Now, finally, pollution and carbon emission has been accorded a value through the off-setting system whereby companies can buy credits to emit carbon. I have my doubts about the off-setting system but the fact is that before it nature had no value in itself. Only if you were fined for pollution did money come into the equation. Similarly, the only value accorded to rainforests was its timber and land. Biodiversity and carbon recycling were ‘free’ services that forests provided until the REDD system came into place. This is another attempt to put a monetary value on nature.

Nature is not cost neutral and never has been. We are part of nature and what affects nature will surely affect us. And this is particularly true of water.

The Centre for Sustainable Development at Cambridge University has devised the auditing system called ‘embedded value’ to calculate the true cost in water terms for everyday consumer items. Their findings are shocking. To give just two examples:

This is how much water it takes for irrigation to grow coffee beans and hops for beer. It means that if you drink 5 pints in a night you are consuming 650 pints of water or in other words enough water to keep 50 people alive for 1 day. The situation for coffee is even worse because much of the world’s coffee is grown in equatorial countries like Kenya which already suffer from severe water shortages. The next time you drink a cup of Kenyan roast think about that

Best Price for the Oxygenics 80277 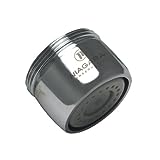 What Can Be Done?

The first thing that needs to be done is that World leaders have to admit there is a problem and money has to be made available for a number of world-wide water husbanding projects. Water trust funds must be set up, rainwater catchment systems should be installed everywhere it rains. Communal irrigation systems must be developed. Desalination technology must be improved and made widely available at affordable prices. And most importantly of all, water must not fall into the hands of private companies looking to exploit shortages, drive up prices and cause mass misery for the poor. Already people living in slums often pay 5-10 times more for clean water than wealthy people living in the same city. If left to market forces the demand for water will impoverish the vast majority of the world’s population.

What Can I do?

For your home, green interior design methods should be adopted. These include installing low flow showerheads and low flow faucet aerators. Rainwater should be collected to water the garden. There are number of other simple practical things you can do to reduce water use at home.

1) Take shorter showers. Run the water to get wet. Stop it and soap up. Then turn the water back on to rinse.

2) Don’t wash the dishes with a running faucet.

3) Only do full loads in the clothes washer.

4) Put bricks or Pet bottles filled with pebbles into the toilet tank to reduce the volume per flush.

5) Keep a bottle of water in the fridge to drink from instead of running the water until it gets cold.

6) Check all your pipes and faucets for leaks. One leaky faucet can waste 20 gallons of water a day.

7) Insulate your water pipes so the water warms up quicker. This way you waste less water waiting for the shower to get warm.

8) Don’t use a sink garburator. They waste water. Instead put your food scraps into a composter and use the compost to grow food.

9) Don’t keep the tap running while you brush your teeth.

These are just some of the easiest ways you can conserve water. When the price of water starts to go up and up (as it surely will) you will be doing these things as second nature.

At the moment water is inexpensive as are a cup of coffee and a pint of beer. So it is for moral and environmental reasons you should conserve water. There are also some financial incentives. If you install a good low flow showerhead such as an Oxygenics 80227 TriSpa you will reduce your heating and water bills by $10 a month. Following the guidelines above will also have an impact on your bills.

So save your money and water now. The next water war and the next major drought are not far off; and you cannot be certain that it will be somewhere else and not affect you.