To Accompany Your Biology Curriculum

I created this series of biology webpages to accompany the biology curriculum we were using in the homeschool biology class I taught. The webpages contain information, videos, and labs that may be helpful for students studying biology. The pages often build on one another, so it's best to do them in order unless you are already familiar with the previous biology topics.

Holt Biology: Student Edition 2004
This biology book, Holt Biology, goes along with this series of webpages. Although you don't have to have access to this book to use my biology webpages, you may find the book (or another biology textbook) useful in your study of biology.
Buy Now

Microscope - for looking at cells, pond water, and other things. 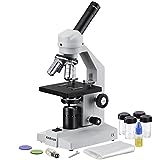 The page includes study guides, videos, and labs on genetics.

Evolution and the Beginnings of Life On Earth

Evolution and the Beginnings of Life On Earth

-Including an intro to taxonomy.

How Did Life on Earth Begin? How Did Life Evolve and Change Over Time? What's the bubble model? What do we mean when we say "Primordial Soup?" Who are Miller and Urey and what did they do? How Do Scientists Classify Living Organisms? These are some of the topics discussed on this page.

There are 4 webpages for the unit on Ecology. Here's the first one in the series:

Webpage 2 in the Ecology Unit

Here's the second webpage in the ecology unit:

Webpage 3 in the Ecology Unit

Here's the 3rd webpage in the ecology unit:

Webpage 4 in the Ecology Unit

Global Changes and the Environment

This is the 4th page in the Ecology Unit:

This page on global change includes information about global warming, acid rain, the hole in the ozone layer, the destruction of the rainforest, and other environmental issues. Also covered is the effects of the behavior of humans on earth's ecosystems, pollution, DDT, what people can do to help the environment, important information about fluorescent light bulbs(please don't throw them in the trash!), ideas for students for undertaking a "go green" project, and more.

The Diversity of Living Things

This unit on the diversity of living things has 4 pages to it.

An Introduction to Taxonomy - The Kingdoms and Domains Of Life

This page on taxonomy includes information on how organisms are classified, the domains and kingdoms we classify organisms into, various forms of multicellularity, tissues, organs, organ systems, and a brief introduction (with photos of organisms) of each of the kingdoms and many of the phyla.

Webpage 2 in the Diversity Unit.

Learning about Viruses and Bacteria

Learning About Viruses And Bacteria

Webpage 3 in the Diversity Unit

Protists do have some things in common though. For example, they live in moist places. Also, they don't form embryos to reproduce.

How do protists move?

Did you know that some types of protists can cause diseases, including dysentery, toxoplasmosis, giardiasis, and malaria?

On this page, we explore the world of protists, such as paramecium, algae, Euglena, plasmodial slime molds, and amoebas!

Page 4 in the Diversity Unit

The fungi kingdom includes mushrooms, molds, rusts, yeasts, and many other organisms. They are made up of slender filaments. Fungi have an interesting way of eating: they secrete digestive enzymes onto something such as leaves or dead animals and then absorb the decomposed nutrients from it. Most fungi reproduce via spores.

There are many different types of plants.

An Introduction to the Animal Kingdom

The Animal Kingdom: An Introduction

Here are some of the characteristics that animals have.

Page 1 of the Invertebrates Unit

Sponges are one type of invertebrate animal. Even though sponges don't have a backbone, they do have a type of skeleton. It's made out of spicules which are tiny needles of calcium carbonate or silica.

Did you know that sponges are animals, and not plants?

Did you know that sponges can regenerate when they are cut into pieces? This means that each piece will grown into a brand new sponge!

Page 2 of the Invertebrates Unit

Cnidarians (such as jellyfish)

Although I surely would not want to be stung by a jellyfish, I think they are fascinating creatures! Have you ever watched them float? They're beautiful!

Cnidarians, which includes jellyfish, sea anemones, and some other ocean life, have radial symmetry.

Cnidarians can have a medusa shape (often resembling an umbrella) and be free floating, or they can be tube-like polyps, most of which are attached to rocks or other objects in the water.

A particularly fascinating cnidarian is a Portuguese man-of war. A single one can contain 1,000 meduses and polyps.

Page 3 of the Invertebrate Unit

Mollusks are invertebrate animals such as snails, squids, octopuses, and scallops. Each mollusk has three major parts to his body: a visceral mass, a foot, and a mantle.

What brings you to this page?

Will you be (or are you) using these webpages to accompany your biology curriculum?

Page 4 of the Invertebrate Unit

Have you ever heard of a Christmas tree worm? I think they may be one of the prettiest types of worms...

Page 5 of the Invertebrate unit

The Characteristics of Arthropods

Arthropods are animals such as insects, scorpions, spiders, shrimp, and crabs.

Page 6 of the Invertebrates Unit

See the outstretched arms on the crinoid shown here? He's using them to catch plankton to eat!

Vertebrates are animals that have a backbone. There are many types of vertebrates, including fish, amphibians, reptiles, birds, and mammals (including people).

Here's the first page of the vertebrate unit.

The Characteristics of Fish

By the way, what do you think? Are seahorses really a type of fish?

Are you a student studying biology?