In this article I’ve tried to collect 50 very interesting, random and true (!) facts.

Please keep in mind that although I’ve done a few hours research on these facts, some of them can still only be an urban legend, even if mentioned on several sites. If this is the case with any of these facts, please leave a comment with your valid source and I will correct the relevant fact. Please help me keep this list as correct as possible – to not only entertain others, but allow them to learn something new as well :). Thanks! 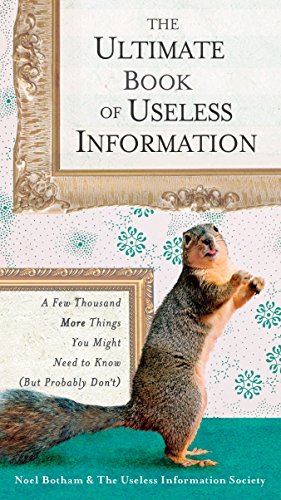 The Ultimate Book of Useless Information: A Few Thousand More Things You Might Need to Know ( But ProbablyDon't)
Buy Now

50 facts that you will find interesting!

1. Usually people are more afraid of spiders than death.

4. There’s a bigger chance that a person dies of a champagne plug than a snake bite.

5. Crocodiles are unable to stick their tongue out.

6. A cockroach can live up to 30 days without its head.

7. The world’s shortest war was fought between Zanzibar and England – Zanzibar capitulated after 38 minutes.

8. The sentence ‘The quick brown fox jumps over a lazy dog.’ uses every letter of the English alphabet.

9. Of all the words in English language the word ‘set’ has the most definitions.

10. If someone keeps a goldfish in a dark room slowly the colour of the fish will turn white.

11. Women blink twice as much as men.

12. On average one celebrates their birthday on the same day with about 18 million people worldwide.

13. Cows can walk upstairs, but not downstairs.

14. As freshmen at Harvard University, Tommy Lee Jones (actor) and former Vice President of the USA Al Gore were matched as roommates in 1965.

16. If a month starts with a Sunday, then that month will always have a Friday the 13th.

17. The most common surname in America and in the UK is Smith.

18. Fleas are one of the best jumpers on the world – they can jump as high as 150 times their own body height.

19. Every second over 7,000 Coca-Cola products are consumed.

20. Bob Marley had 3 children born in 4 weeks to 3 different women.

21. In 1979 a women jumped off the 86th floor of the Empire State building and survived!

22. Al Capone’s brother was a federal Prohibition agent in Nebraska; meanwhile his younger brother was running a bootlegging empire in Chicago.

24. Banging your head against the wall consumes 150 calories per hour.

25. Cherophobia is the fear of happiness, rejoicing and joyfulness.

26. Bubble wrap was originally designed to be used as wallpaper.

27. You can change your language on Facebook to ‘Pirate’.

28. The brand name Häagen-Dazs is only a fabricated, ‘foreign-sounding’ name, it doesn’t actually mean anything!

29. The United States has more Jewish citizens than the State of Israel.

30. Charlize Theron’s mother killed her father in self defense when she was 15.

31. The world’s youngest confirmed mother in history was Lina Medina, who gave birth at the age of 5 years and 7,5 months.

34. Each year thousands of birds die crashing or flying into windows.

35. Dolphins sleep with one eye open.

37. Fortune cookies were actually invented in America by a Chinese immigrant living in California in 1918.

39. The most used expression of any language is ‘OK’.

40. The first most recognised scent on the whole world is coffee.

41. It is impossible to sneeze with the eyes open.

42. The Hummingbird is the only bird on the world that can fly backwards.

44. Frogs can drink water through their skin.

45. On average an American family watches TV for 6 hours each day.

47. According to Guinness World Records the oldest dog lived 29,5 years.

48. Catfish have the most taste buds on the world – 20 times more than humans do.

Comments on this article