Bring out the big guns: The shooting begins!

So you've gone to all the trouble of creating and developing the idea, and you've actually gotten the first portion of your crew together to finish pre-production.

I may have told you that pre-production was the hard part; now I am here to tell you I lied!

In production, you have a lot more people to be concerned with, people who may or may not make the process an easier one as you struggle, indefatigable, toward your utter oblivion. Some of these people aren't even getting paid, and you are expecting them to give you the best job they can. If I believed in it, I'd say, "Good luck!" But since I don't, I'll just say, "Ha-ha!"

It is a hopeless moron that thinks he can easily get a group of people together with their own ideas and ideals that will work as a team without at least one person losing a vital organ (I know probably three people missing kidneys and one who can no longer hear in stereo).

If you did your work in pre-production as you were supposed to, you would already have lined up many of the major players including the actors, camera-persons (let's not be sexist here), caterers, makeup persons, pedicurists, badger handlers, nose-wipers, personal assistants, drug dealers, personal assistant to the drug dealers, and any number of other various and sundry positions too unimportant to mention here. (In all actuality, although you may have heard this many times before, there are no small jobs, only small people. In fact, "The Wizard of Oz", "Under the Rainbow", "Willy Wonka and the Chocolate Factory", and, to a lesser degree, "Charlie and the Chocolate Factory" are all full of little people. Not to mention "Pit Boss".) (I said don't mention it! But does anyone listen to me?)

So let's take a look at how production works.

When you begin work on the production phase of your film you'll first have to meet the challenge of making sure that your pre-production is finished and all in order. Messy pre-production leads to messy pro-duction (not to be confused with con-duction or in-duction which would really make the whole show an utter and complete "crap-fest". (In the dictionary, crap is defined as any kind of refuse, be it plant, animal, or human waste. Don't be offended. Thomas Crapper wasn't.)

Now you are ready to begin shooting your footage. Here is where you will have the challenge of bossing around everyone on the set (unless, of course, the producer shows up and then you will have to lick his boots as much as you expect others to lick yours -- you see the conundrum you face if you are the producer AND director; unless you are very flexible you will wind up with the taste of boot polish in your mouth AND a sore back).

Often, you will begin by filming the final scenes of the movie and finishing with one that comes somewhere before that. This is in case a major actor is such a jerk that you have to kill him or her before production is finished. This kind of thing happens all the time. Most of the Indie actors today are actually clones or stunt doubles of the original actors who, quite justifiably, had to be killed by their directors for messing up that scene more than 300 times because they said they just couldn't justify their motivation and needed extra time to focus on the characters needs when all they were supposed to do was to take the **** orange juice out of the **** refrigerator and pour themselves a glass!!! Your character wants orange juice! How's that for motivation! And you're not famous yet! Stop acting as if you should have a limo and your own dressing room! This is a low budget Indie shoot that is just hoping to make it to release! For Crying Out Loud!

Sorry about that, but I'm a little touchy on the subject, and my lawyer says I shouldn't be talking about open litigation anyway.

If you want to learn about directing to help you with the production phase of making your movie, I suggest Sidney Lumet's book, "Making Movies" and Laurent Tirard's book, "Moviemakers' Master Class" (a copy of which I personally stole from my good friend, Lilith -- I promise to return it soon?). See below for links to these books.

Normally, the day will start with the crew showing up at their assigned "call time".1 That's when they began putting all the things together that are necessary for the day's shoot. This is true, unless of course they happen to be union. In that case they may begin with a break and go straight home after. They are kind of like the Lilliputians in that way. (Sung) "We get up at noon and start to work at one. Take an hour out for lunch, at two were done. Strong ol' union!"

Usually later, the actors will show up for their call time. They will then go through costuming, makeup, and rehearsal. Just make sure that you have taken all the blue M&Ms out of the bowl before they show up and pitch a fit! This may lead to a situation described a few paragraphs ago and you haven't even shot a second of tape yet. Not a good start to the day!

Now that all of the set dressing, actor dressing, and -- by this time of the day -- salad dressing over a nice bed of young spinach and cheese cubes are taking care of, it is time for the director to get the shots in order and started. He will now have the sole discretion as to how the day proceeds (yeah, right -- and Charlie Chaplin might rise from his grave for a zombie comeback! (Which of course would probably go over very well considering the market at this time.))

The assistant dictator (I mean director) takes a large role at this point by yelling a lot of things at the cast and crew which are usually listened to, but are sometimes missed by those standing around in the periphery of the set. This really happens.I remember working on a show called "ER". We had just returned from lunch and everyone was still waiting around for the director to come back. I was in the "lobby" of the hospital set, just joking around with some of the other actors, and doing my best Dr. McCoy voice while telling a Star Trek joke. As I reached the punch line, during the loudest portion of the "I am a doctor, not a...", the entire set went quiet and I was quite chagrined to hear the AD (assistant director) say something along the lines of "When did Deforest Kelly get here?". Yes, I worked with George Clooney AND embarrass myself in front of him. The high point in my career (although I and the AD both got some decent laughs.)

Once the AD has everyone rounded up, the director will commence with the directing. He will start each take by saying, "Action" and will end each take by saying, "Cut". If everyone is doing their job correctly, everything will go fairly smoothly where the crew is concerned. That's what the job of Continuity is for. The actors, however, will provide the bulk of the comic release.

ROMEO: Down here in the bushes! The damned balcony broke! (Actual quote.)

DIRECTOR: Get me a gun. (Another actual quote.)

Thus, Dick Clark and Ed McMahon started a franchise that is still alive today. We miss you, Ed. Hope you're feeling well, Dick! (At the time of my review of this Hub, Dick Clark has also passed away. Sorry to hear that. We'll always have the memories.)

The shots and set-ups continue until the day's schedule is over. Then the director and his team will look at the dailies (the film/tape shot that day).

When all the shots have been covered, the movie is considered to be "in the can". This is still true for film stock, but I've never seen anyone use a can for tape. Not unless it was a particularly bad movie and it was a trash can. Some films really should have gone there. (Laserblast? Ator and the Quest for the Mighty Sword? Creature from the Hillbilly Lagoon (a film so bad I couldn't watch more that five minutes of it)?)

But I'm not here to be a film critic. There are too many of those opinionated jerks out there as it is! (If any of them are reading and about to watch my film, know that I am just pandering to the public. You're LOVELY people and your opinions REALLY matter to me.)

But now the director has to approve the following day's schedule and make sure that all is ready to go for the next set of shots to be put to media. You have to really be in control of the process or you will find yourself demoted to Gopher. (Go Fer this and Go Fer that.) A weak director will never gain the respect of his cast and crew (unless you are Woody Allen and everyone expects you to act that way anyhow).

You will find that, although some great directors went to school for their craft and are constantly asked to teach their craft, that few of them did little more than watch great movies and work at directing great movies. The biggest number of "in demand" directors are self taught.

So, that's about all there is to the Production phase of the movie. It may seem a little sparse in content, but to teach you how to Direct and manage a crew would be far beyond the scope of anything less than a book. I've given you the links to a few of these books below and think they will cover all that I have not.

My next article will cover Post-Production and I will get to it as soon as I stop crying from all the work I'm doing in post-production on my current film, Akumu. Editing sound and video are good skills to have, but difficult skill sets to learn on your own. Oh, well. I needed some more footage for the blooper reels anyway.

Shot Location for Photos Above. 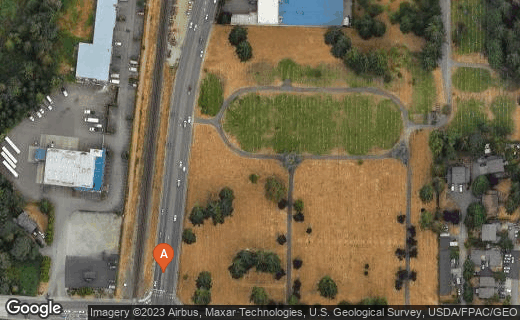 We were actually filming in and around the small clearing at the NE portion of the oval drive. Had a great time!