I've been steadily increasing my classical music collection over the past two years, since discovering a real love for it after the current offerings of pop music failed to keep me interested for more than a couple weeks. One of my older acquisitions recently came back to me, and I've been listening to it ever since. I thought I'd write a review of it in case anyone out there has an interest in classical music, but finds it difficult to find what they might like. 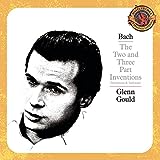 The CD liner notes are packed with insightful writings of Glenn Gould on Bach and The Two and Three Part Inventions, however there is little information about Bach himself. I suppose this isn't a problem in itself since there is a wealth of biographical information available on the internet, but the CD packaging and liner notes seem a bit more about Gould at times than Bach.

Bach's two and three part inventions were written as practice pieces for keyboardists of the times (mostly harpsichord players), so the instrumentation is a solo piano. Because of this, they begin quite simply and build in complexity of melodic voicing and texture as they progress. The early pieces are very simplistic, almost like exercises in scales. But this simplicity, coupled with Gould's playing, provides a very relaxing and refreshing effect on the mind.

The pieces cycle through major and minor keys from A to G, with 2 flats (E, B) thrown in. As a bonus, there are 10 tracks of another Bach composition: English Suite No. 1 in A Major. I actually have another CD of the complete English Suites, played by Sviatoslav Richter that I'm not too fond of. I think Gould's interpretation is much more engaging. I have read that Gould's interpretations of these pieces differ somewhat in tempo from other performers, but I have to say that his rendition on this CD seems very appropriate. The pieces seem neither rushed nor unduly drawn out. Altogether there are 40 tracks and over 72 minutes of music.

This is my first Glenn Gould CD. I had never heard of him when I bought it, but I was Googling around a few nights back and found some videos on YouTube. His playing was exquisite, but his appearance was bizarre. He looked overly expressive, possessed, or mentally handicapped. If it were an SNL skit focusing on a caricature of a classical pianist, it would have been virtually identical. After doing a little research, it seems that he may have had Aspergers Syndrome

Here's a sample of what I mean:

Gould also had a habit of humming to himself while playing. This understandably caused recording engineers much consternation. I hadn't realized it when I first listened to the CD, but on subsequent listening (especially with headphones) I am able to hear what I believe is Gould humming. It's by no means intrusive however and takes nothing away from the overall beauty of the recording. You literally have to be concentrating to hear it.

A coworker recently recommended the movie: 32 Short Films About Glenn Gould. I borrowed it from the library and it was quite interesting, although not very informative. It's basically 32 vignettes that highlight Gould's eccentricities in various facets of his life.

Gould plays a pre-World War II Steinway (CD 318). He performed "radical experiments in regard to the action" on the instrument to modify it for better baroque playing. He changed the distance of the hammers from the strings and modified "the 'aftertouch' mechanism, etc...." The result is a sound of immediacy and clarity that does the material great justice.

I would greatly recommend this CD for anyone who is looking to add to his or her classical collection or find something to relax to. In fact, the entire CD is a great de-stressor and excellent for calming down after a hectic day. It makes for good background music or dinner music, though some tracks in minor keys may be too contemplative for dinnertime conversation.