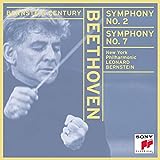 This is the latest in my Layman's Review series on Classical Music CDs. I do this because I love the music and I do this in an effort to help other people with an interest in Classical Music find what they might like. So without further delay, on with the review!

This is a review of Beethoven: Symphonies Nos. 2 & 7, conducted by Leonard Bernstein and played by the New York Philharmonic orchestra.

Beethoven's 2nd symphony was written in 1802 at time he started noticeably deafening. This is not only remarkable because one would think that hearing was essential to a composer, but also because this symphony is so upbeat and merry.

The first movement begins with an extended introduction starting with a bold entry by horns with strings underscoring the opening notes. This is echoed again about 20 seconds later and continues to "sort itself out" for first minute or so. It almost seems unsure where to go.

Bold themes begin to emerge again only to fall apart. After about 2 and a half minutes a very boisterous theme emerges softly in the string section and builds to a triumphant exclamation as the entire orchestra joins in. Themes then progress more or less as one would expect for a classic era symphony's first movement.

Once the orchestra is fully engaged, this is a wild and heart-pounding ride!

The second movement is slow, as is typical of most second movements of a classical symphony. It has a down tempo and regal introduction. This movement offers a soulful serenity that is a welcome break from the sometime breakneck pace of the other movements.

Beethoven starts out with a light and frolicking dance-like theme. He spends much of this movement exploring various rhythmic variations on the main theme. Again, musical passages seem to wander down one path, only to be abruptly pulled back to the main idea. This movement is a Scherzo, which is Italian for "joke", so it's not surprising that it conjures up images of court jesters dueling for the attention of the king.

This is the joyous finale and it is the perfect finish for such a joyful and ebullient symphony. This movement begins with a sprint and continues the pace throughout with soaring melodies and strings like birdsong. 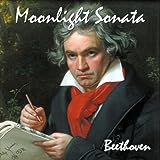 Richard Wagner dubbed Beethoven's 7th Symphony "The Apotheosis of Dance" and it is indeed full of wonderful dance-like themes. This was written in 1812 and Beethoven is at a point in his composition where he is starting to use more expressive techniques that would later become associated with the Romantic period.

Again, like the 2nd symphony, the first movement of the 7th begins with a long introduction. Beethoven liked to make bold statements, but he also followed them up with such exploration of musically ideas that those bold statements seem matter of fact and pre-ordained after the fact. He does this quite nicely here.

This is unlike the slow 2nd movement of many symphonies. Its theme is quickly established and has a hauntingly beautiful melody. Beethoven explores the melody fully building it up to majestic and Olympic proportions, only to tear it down and evolve into some yet grander incarnation.

In fact this movement was encored when it premiered which is quite rare for slow movements. I have read that this movement is sometimes played too slowly and sounds like a funeral march. I can imagine how it would, and I am grateful that Bernstein has avoided such temptation. This is still a playful and majestic movement, while at times somber. A very nice balance.

This is another Scherzo, and a romping one at that! Once again, it is very dance like and has elements of folk music of the time. One can easily picture people frolicking in dance at the neighborhood party.

This is the culmination of the previous 3 movements. The Dance themes really take center stage in this movement. There are strong elements of Hungarian Folk dance themes, and a very boisterous and grand galloping theme. This is Beethoven at his best -big and bold.

I would recommend this CD for anyone looking to add something from Beethoven to there collection. The music is upbeat and pleasant; where some of Beethoven's other music can be dissonant or melancholy. These symphonies are not quiet and meditative. They are loud and boisterous. They are a celebration and get the blood pumping. This would be good background music for a loud dinner party.

The production quality is superb and, as I mentioned previously, Leonard Bernstein does an excellent job conducting.