The Legacy of Han Solo in Star Wars.

Chewy and Han, what a pair!

A must read for Star Wars fans.

Please check out this one too! http://mikesyrsutton.hubpages.com/hub/The-10-best-villians-of-all-time

Did you ever ask yourself or wonder what was missing in Episode 1, 2, and 3? I did, and after a while I realized it was Han Solo. The crazy, smuggling, scruffy, nerf herding, space cowboy, that annoyed almost as many people than he saved, is what was lacking in the Star Wars prequels. While Qui Gon Jinn filled the hole a little in episode 1, no one did in episode 2. Which of course is considered to be the worst of the 6. Where they should have put Han is in episode 3. Instead, they blew it with Chewbacca's appearance.

Not only did Han save Luke's life twice, but he brought a much needed form of comic relief to the best fantasy movie of all times. Just think of how his bantering with Luke and Leia, and his smart comments to Obi Wan, added so much humor to the first trilogy. He was so disrespectful when he called Luke kid, C3PO the professor, and Obi Wan an old fossil, but it was great to watch.

His smart remarks were missed in the prequel as Jar Jar was supposed to be funny but was more annoying, and C3PO was serious with no one to play off of.

Chewbacca- Why was Chewbacca an adult and some sort of an official in Episode 3? He was not a warrior but a friend of Yoda's and some sort of diplomat. Huh? Chewy had no respect for Obi Wan or Luke in episode 4, but we are to believe he was good friends with Yoda? Then how does he become a gopher for a smuggler on a small ship? That was silly! Chewy should have been a child that was orphaned by the war and adopted by the Solo's. That way we would assume that he grew up with Han.

The age factor- How could Han have been old enough to have been in Episode 3? Well, he seemed a bit older that Luke in the New Hope, and Luke was in "The Revenge of the Sith". I am convinced that Episode 3 would have been better and more popular if Han was a young boy that made a few smart remarks when his parents agreed to take Chewy in! Especially if a Jedi dropped him off. That would have been priceless to see the irreverent one as a smart mouthed kid! It also would have made the two episodes and trilogies gel a bit better! Besides, how do you bring Boba Fett in to the story as a boy and not Han? That was crazy and another of Lucas's decisions that made no sense. 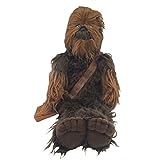